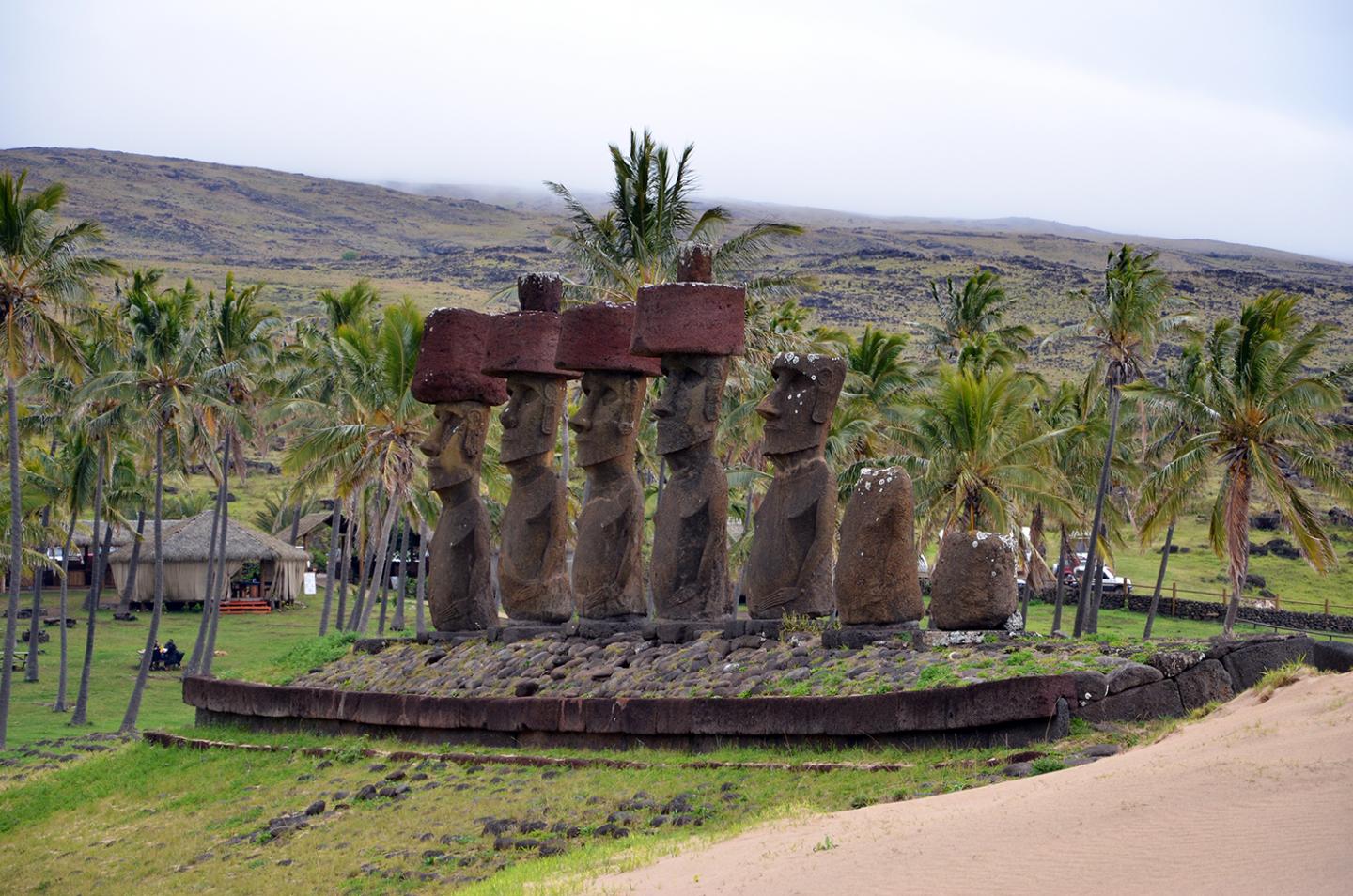 EUGENE, Ore. – Feb. 6, 2020 – The prehistoric collapse of Easter Island’s monument-building society did not occur as long thought, according to a fresh look at evidence by researchers at four institutions.

“The general thinking has been that the society that Europeans saw when they first showed up was one that had collapsed,” said Robert J. DiNapoli, a doctoral candidate in the University of Oregon’s Department of Anthropology who led the analysis. “Our conclusion is that monument-building and investment were still important parts of their lives when these visitors arrived.”

Rapa Nui is believed to have been settled in the 13th century by Polynesian seafarers. They soon began building massive stone platforms stacked with megalithic statues and large, cylindrical stone hats that were used for cultural and religious rituals, including burial and cremation. A widely-held narrative is that monument construction stopped around 1600 after a major societal collapse.

In the new research, detailed online ahead of print in the Journal of Archaeological Science, DiNapoli’s team presents a chronology for the statue platform construction by integrating existing radiocarbon dates with the order of assembly required to build the monuments and the written records of Dutch, Spanish and English seafarers who began arriving in 1722.

Taken together, DiNapoli said, the integration of data, using Bayesian statistics, brings clarity to radiocarbon-dating at various sites. Rapa Nui islanders, the researchers concluded, continued to build, maintain and use the monuments for at least 150 years beyond 1600.

The project began as part of DiNapoli’s dissertation, which is focused on the process of building the monuments’ architecture. Looking at 11 sites, the researchers examined the necessary sequence of construction, beginning with building a central platform and then adding different structures and statues.

That helped make sense of differing radiocarbon dates found at various excavation sites. Monument construction, according to the team, began soon after initial Polynesian settlement and increased rapidly, sometime between the early 14th and mid-15th centuries, with a steady rate of construction events that continued well beyond the hypothesized collapse and the European arrival.

When the Dutch arrived in 1722, their written observations reported that the monuments were in use for rituals and showed no evidence for societal decay. The same was reported in 1770, when Spanish seafarers landed on the island.

“Their stays were short and their descriptions brief and limited,” DiNapoli said. “But they provide useful information to help us think about the timing of building and using these structures as part of their cultural and religious lives.”

However, when British explorer James Cook arrived four years later, in 1774, he and his crew described an island in crisis, with overturned monuments.

“The way we interpret our results and this sequence of historical accounts is that the notion of a pre-European collapse of monument construction is no longer supported,” DiNapoli said.

“Once Europeans arrive on the island, there are many documented tragic events due to disease, murder, slave raiding and other conflicts,” said co-author Carl Lipo, an anthropologist at Binghamton University in New York.

“These events are entirely extrinsic to the islanders and have, undoubtedly, devastating effects. Yet, the Rapa Nui people – following practices that provided them great stability and success over hundreds of years – continue their traditions in the face of tremendous odds,” he said. “The degree to which their cultural heritage was passed on – and is still present today through language, arts and cultural practices – is quite notable and impressive. I think this degree of resilience has been overlooked due to the collapse narrative and deserves recognition.”

The approach developed for the research, which was funded by the National Science Foundation, may be useful for testing hypotheses of societal collapse at other complex sites around the world where similar debates on timing exist, the researchers noted.

Co-authors with DiNapoli and Lipo were Timothy M. Rieth of the International Archaeological Research Institute in Hawaii and Terry L. Hunt of the University of Arizona.

Wikipedia, a source of information on natural disasters biased towards rich countries

Catching evolution in the act