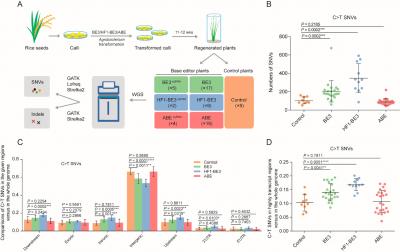 Chinese scientists have found that cytosine base editors (BE3 and HF1-BE3) induce genome wide off-target mutations.

A research team led by Prof. GAO Caixia of the Institute of Genetics and Developmental Biology of the Chinese Academy of Sciences performed a comprehensive investigation of the off-target mutations of BE3, HF1-BE3 and ABE using whole genome sequencing (WGS) in rice, an important crop species.

Researchers have already developed cytosine and adenine base editors (CBE and ABE, respectively). The base editors are fusions of a nickase-type Cas9 protein with a cytosine deaminase or an adenine deaminase, and have been found to catalyze the conversion of either C>T or A>G in the target site of a single guide RNA (sgRNA).

Although on-target conversions by CBE and ABE are found in many organisms, their off-target effects have not been systematically assessed at the whole-genome level.

Considering that ectopic expression of cytosine deaminase in E. coli, yeast cells and human cells has been found to elicit genome-wide deamination events, it has become necessary and urgent to examine the specificity of base editors at the whole-genome level and in an unbiased manner.

The researchers chose three widely used base editors: BE3, high-fidelity BE3 (HF1-BE3) and ABE. A total of 14 base editors construct targeting 11 genomic sites were transformed into rice via Agrobacterium transformation.

Regenerated T0 plants edited by BE3, HF1-BE3 or ABE and those transformed with the base editors but without sgRNAs, together with two control groups of plants (i.e., wild-type rice and null-segregate of transgenic rice), were analyzed by WGS.

The base editor groups and control group did not differ substantially in the number of indels found.

In contrast, the BE3 and HF1-BE3 groups had significantly more single-nucleotide variants (SNVs) than the ABE and control groups.

Consequently, C>T SNVs in the BE3 and HF1-BE3 plants were 94.5% and 231.9% more frequent than in the control plants, respectively.

Notably, treatment of rice plants with BE3 and HF1-BE3 in the absence of sgRNA also caused high numbers of C>T SNVs. Furthermore, the great majority of the extra C>T mutations conferred by BE3 and HF1-BE3 did not match the off-target sites predicted using an in silico software (Cas-OFFinder).

All the SNVs, as well as C>T SNVs, were found to be distributed throughout the rice genome, indicating a genome-wide occurrence. Mapping with transcriptome data showed that the high numbers of C>T SNVs associated with BE3 and HF1-BE3 occurred more frequently in transcribed genic regions, where single-stranded DNA is generated owing to active transcription.

Altogether, the data generated by Dr. GAO’s team suggest that BE3 and HF1-BE3, but not ABE, induce genome-wide off-target mutations in rice.

These off-target mutations, being mainly C>T SNVs and enriched in transcribed genic regions, are not predicted by the current in silico approach. The base conversion unit containing cytosine deaminase is likely responsible for the high number of off-target SNVs elicited by BE3 and HF1-BE3, and needs to be optimized for increasing the specificity of cytosine base editors.

“Base editors represent an appealing tool for producing the precise genetic variants needed in plant breeding. The specificity of these editors is of paramount importance because off-target mutations can be deleterious. We revealed that current BE3 or HF1-BE3 cause unexpected and unpredictable genome-wide off-target mutations in plants, highlighting the urgency of optimizing the specificity of this type of editor,” said Dr. GAO.

This work, entitled “Cytosine, but not adenine, base editors induce genome-wide off-target mutations in rice,” will be published in Science.

This research was supported by the National Natural Science Foundation of China, the National Key Research and Development Program of China, and the Chinese Academy of Sciences.

Team clinic: empowering youth to take back their healthcare