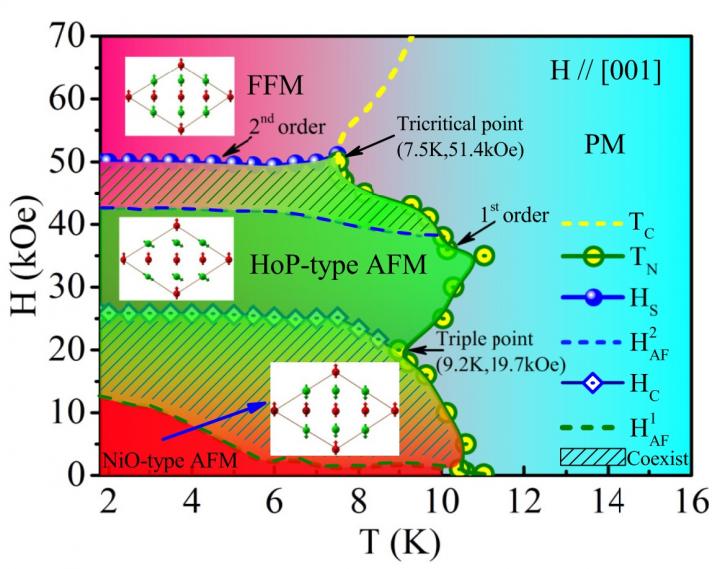 Topological semimetals are one of the major discoveries in condensed-matter physics in recent years. The magnetic Weyl semimetal, in which the Weyl nodes can be generated and modulated by magnetization, provides an ideal platform for the investigation of the magnetic field-tunable link between Weyl physics and magnetism.

The united team performed an investigation on high-quality single crystals of PrAlGe and DySb. For PrAlGe, the intrinsic ferromagnetic ordering acts as a Zeeman coupling to split the spin-up and spin-down bands, but the whole band structure is still kept. The study of magnetism suggests that the magnetic interaction in PrAlGe is of a two-dimensional Ising type, revealing a uniaxial magnetic interaction along the c axis. However, the ordering moments are tilted from the c axis, which causes antiferromagnetism in the ab plane. As for DySb, a field-induced tricritical phenomenon is revealed. Based on the magnetization analysis, a detailed H-T phase diagram around the phase transition is constructed when the magnetic field is applied along [001] direction.

This phase diagram is indicative of delicate competition and balance between multiple magnetic interactions in these systems and lays a solid foundation for future research in topological transition and criticality.