In the early spring 2019, the Institute for Society, Culture, and Environment (ISCE) hosted a National Science Foundation career workshop for social science researchers. Among the attendees were Ben Katz, assistant professor of human development in the College of Liberal Arts and Human Sciences, and Tae-Ho Lee, assistant professor of psychology in the College of Science. 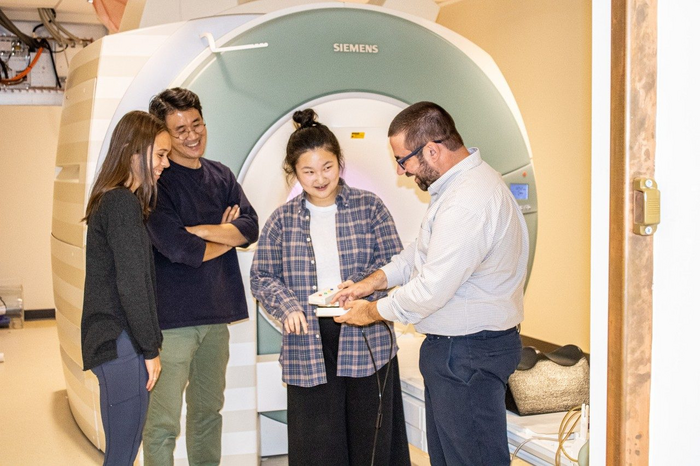 In the early spring 2019, the Institute for Society, Culture, and Environment (ISCE) hosted a National Science Foundation career workshop for social science researchers. Among the attendees were Ben Katz, assistant professor of human development in the College of Liberal Arts and Human Sciences, and Tae-Ho Lee, assistant professor of psychology in the College of Science.

Newly hired at Virginia Tech, Lee had already begun preparing a human-animal aging project with Il Hwan Kim, an assistant professor from the University of Tennessee Health Science Center. Friends from years of collaboration while earning their degrees, the two were examining the role of the locus coeruleus circuit in age-related cognitive declines using both animal and human models. Initially, Lee and Kim designed a circuit-manipulation approach in a rodent model to prove causality, “to see the behavioral changes before and after the circuit rescue in the animal brain,” said Lee.

Lee and Kim were looking to include an additional human interventional design that could be similar to the animal circuit rescue model when Lee met Katz, whose areas of interest include cognitive training and age-related decline. Their meeting proved fortuitous.

Three years later, the team of Lee, Kim, and Katz has earned a five-year $3.8 million grant from the National Institute on Aging for their study, “Losing Specificity: The role of the locus coeruleus in age-related distractibility.” Specifically, the researchers are looking at attention networks in the brain with the goal of examining how those networks do or do not connect to each other when one is trying to focus in a distracting or stressful environment.

One of the regions of focus is centered on the locus coeruleus, which plays a role in determining which neural resources in the brain need to be involved for certain cognitive processes, such as decision making and executive function. The other is the salience network, which is composed of circuits throughout the brain that act together to prioritize what information to process. Connectivity between the two networks is essential for successful attentional processing, including avoiding distraction.

“Our goal is to find the mechanisms that might inform effective interventions and programs for age-related cognitive decline,” said Katz. “The idea is to be able to identify and measure locus coeruleus and salience network connectivity in the context of distractibility. We also want to see if there are any differences in connectivity between people who are at most risk for Alzheimer’s or dementia and people who are not.”

These networks naturally decline with age. Katz, Lee, and Kim want to compare the connectivity of these two networks between older adults and younger adults, determine if there are any implications for participants at risk for dementia and see if the connections improve for the older adults after cognitive training.

Each researcher has a specialty. “I’m interested in how brain circuits, especially for the locus coeruleus, optimize behavior when responding to the environment,” said Lee. “I found that locus coeruleus function declines as we get older and therefore other subsequent cognitive processes degenerate together.” The locus coeruleus network in the brain is associated with a risk of dementia, but, due to its small size and location in the brain stem, it is a difficult area to research.

“Looking at this region, doing imaging and analysis on the locus coeruleus, which is actually a really small region of interest, and getting good usable data on this can be challenging,” said Katz. “But Tae-Ho is an expert on imaging the locus coeruleus.”

Kim, a neurobiologist, has been able to locate the neural track between the locus coeruleus and the salience network in rodents. “He is a rare scientist who can directly change the circuit activity between certain regions,” said Lee. “The circuit causes behavior changes, which proves causality in animals.” That is their goal in humans as well – to provide further evidence of causality.

Using cognitive training, which is equivalent to the animal circuit manipulation and rescue, to compare brain network connectivity between the locus coeruleus and the salience network before and after the training, will enable Katz to better infer causality, as with the animal models.

“The idea is to understand and pinpoint the neurophysiological mechanisms responsible for better attention and resistance to distractors,” said Katz. “This will help us understand the neural mechanism supporting differences in attention in a way that then lets us target those mechanisms. That will take us to the next step.”

That next step would be interventions.

The researchers note that while an individual may have a genetic risk for developing Alzheimer’s, this is not necessarily a guarantee that one will develop it. In this study, they are looking to see any differences in connectivity between people who are at risk and people who are not.

Thus far, interventions have not been able to successfully slow or reverse attentional declines associated with Alzheimer’s disease. If Lee, Katz, and Kim can locate the specific physical mechanisms that are responsible for age-related decline in the ability to focus, this may open the door to further research on interventions to reduce this decline.

However, individuals at risk for Alzheimer’s disease are not the only potential target for this line of research. Since the study is about distractibility, which affects people of all ages, their findings could also have relevance for children and adults with attention deficit disorder.

“What is exciting for me is the team that Tae-Ho has brought together,” said Katz. “This doesn’t happen that frequently, especially this partnership between individuals with expertise in animal models and human work and a really clear pathway from basic mechanisms to potential interventions. This is pretty unique.”