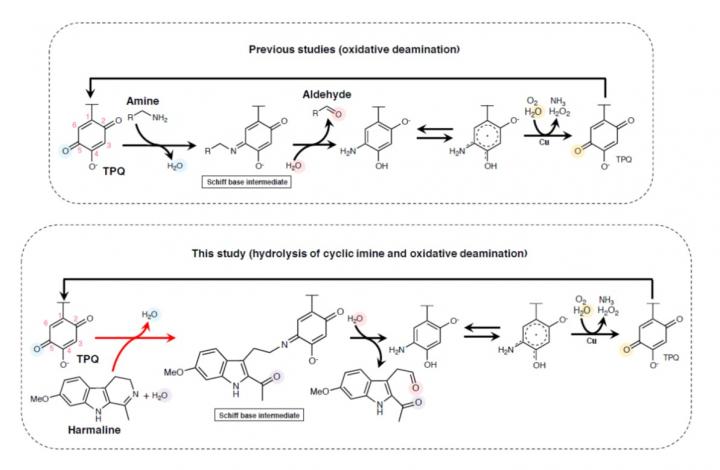 Tsukuba, Japan – Cyclic imines form a general class of chemical compounds that includes the metabolites of drugs used to treat a wide variety of conditions. β-carboline alkaloids in particular have been extensively studied as medicines, showing excellent bioactivities, and have been used in treatments for hypertension. However, despite significant understanding of the biosynthesis that forms cyclic imines, the degradation of these compounds is not well understood. Now, researchers from the University of Tsukuba have isolated cyclic imine-metabolizing microorganisms from soil, identified a cyclic imine-metabolizing enzyme, and proposed its catalytic mechanism. Their findings are published in Nature Communications.

One of the simplest β-carboline alkaloids is harmaline, which is a bioactive component of the medicinal plant Peganum harmala. The roots, seeds, leaves and bark of P. harmala have been used in traditional medicine in various cultures around the world. With this in mind, the researchers hypothesized that harmaline produced by the plants must be degraded by microorganisms in the surrounding soil.

“We were able to isolate the harmaline-metabolizing bacteria Arthrobacter sp. C-4A from the soil around the roots of P. harmala,” study leading author Toshiki Nagakubo explains. “Subsequently, the particular enzyme involved in the catalysis was isolated from the bacteria, and we identified it as copper amine oxidase. This is the first time a link has been made between copper amine oxidase and cyclic imine ring opening.”

As a result of their findings, the researchers proposed a two-step mechanism for the enzymatic breaking of the carbon-nitrogen double bond that is particular to imine compounds. In addition to identifying copper amine oxidase as the catalyst, the team was able to show that the same enzyme isolated from different bacteria had a similar effect on degradation. Given the broad range of organisms, including humans, that produce β-carboline alkaloids, this expansion of the general understanding of cyclic imine degradation has the potential to impact many areas of research.

“Our findings add an interesting dimension to the current knowledge surrounding copper amine oxidases,” study corresponding author Michihiko Kobayashi explains. “We hope that our mechanism and the transferability of our observations will allow for further catalytic physiological processes to be identified and lead to significant developments in pharmacology.”

Waste materials to be tested as viable options for insulating buildings