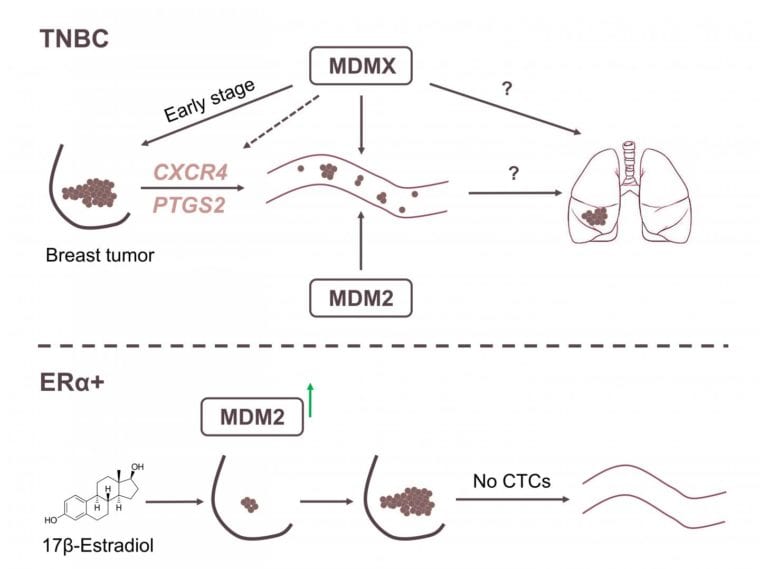 NEW YORK, January 30, 2019 – The MDMX and MDM2 proteins play critical roles in keeping the tumor-suppressing protein p53 from damaging the production of healthy cells. But researchers have also found a causal connection between overexpression of MDMX and MDM2 and breast cancer. Now, in a newly published paper in the journal Breast Cancer Research, scientists at The Graduate Center of The City University of New York and Hunter College are the first to report that MDMX promotes metastasis of triple-negative breast cancer–one of the most aggressive forms of the disease, and one that is more prevalent in young women and women of color. The researchers also were able to duplicate early findings from other scientists who showed that MDM2 promotes metastasis of triple negative breast cancer.

“Triple-negative breast cancer metastasizes more often, so it’s one of most deadly forms of this disease,” said Graduate Center and Hunter College Professor Jill Bargonetti, whose lab conducted the research. “With this research, we now know that the MDMX protein may be one of the drivers that makes this form of cancer so aggressive, and we can potentially look at targeting this and the MDM2 protein to prevent these cancers from spreading.”

The MDMX and MDM2 genes are expressed in multiple breast cancer subtypes. Determining these genes’ unique effect on tumor development and metastases in various types of cancer could help researchers identify new drug targets, novel therapies and create more precise treatment regimens. Bargonetti and her team are considering next steps for advancing their findings towards potential drug development. “These studies are very expensive, but our next goal would be to test one of the small molecules known to block MDMX to see if it can inhibit metastases,” she said.

The Graduate Center of The City University of New York (CUNY) is a leader in public graduate education devoted to enhancing the public good through pioneering research, serious learning, and reasoned debate. The Graduate Center offers ambitious students more than 40 doctoral and master’s programs of the highest caliber, taught by top faculty from throughout CUNY — the nation’s largest public urban university. Through its nearly 40 centers, institutes, and initiatives, including its Advanced Science Research Center (ASRC), The Graduate Center influences public policy and discourse and shapes innovation. The Graduate Center’s extensive public programs make it a home for culture and conversation.

Jumping drops get boost from gravity

Scienmag May 28, 2019
Credit: Virginia Tech A decade ago a new idea was brought into the general scientific community - shedding water…