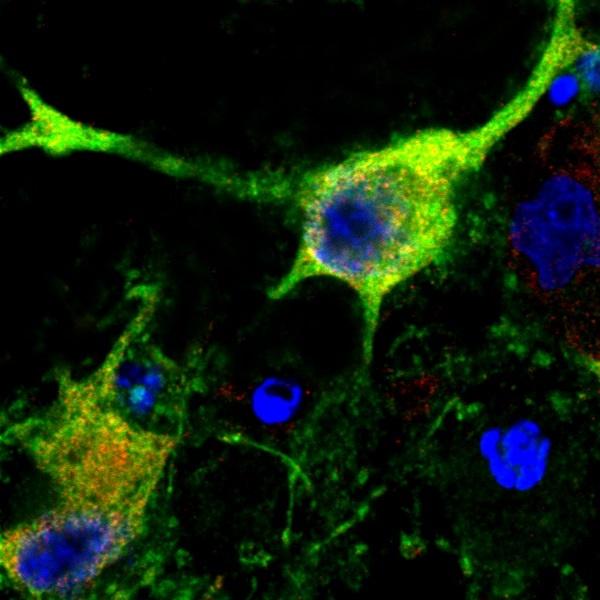 PITTSBURGH, Feb. 11, 2019 – Every 40 seconds, someone in the United States suffers a stroke and available therapies, such as clot busting drugs or clot removal devices, are focused on limiting the extent of brain damage. Now, research from the University of Pittsburgh School of Medicine and the VA Pittsburgh Healthcare System shows that a brain protein called UCHL1 may be critical to how nerve cells repair themselves after stroke damage. The research, conducted in animal models, could aid in the development of therapies that enhance stroke recovery by improving the underlying biological repair process.

“Even though traditional stroke therapies are very effective when available, the treatment must be started in the first hours after a stroke and most patients are not able to get these treatments. So there is a clear need for new approaches that can improve recovery days after a patient experiences a stroke,” said co-senior author Steven Graham, M.D., Ph.D., professor of neurology at Pitt’s School of Medicine, and associate chief of staff for research at VA Pittsburgh. “We think we have identified a protein that is at the root of how the brain recovers from stroke, making it an attractive target for developing drugs that help improve recovery.”

UCHL1 is an enzyme that is highly active in the brain and plays a role in clearing away abnormal proteins. Mutations in the gene coding for UCHL1 have been thought to cause motor function deficits in humans. Previous research from Graham’s lab had provided some hints as to UCHL1’s function, showing that cyclopentenone prostaglandins (CyPgs) – fatty acid molecules – released in nerve cells after a stroke bind to UCHL1 and impair its function.

Graham teamed up with Feng Zhang, Ph.D., an assistant professor of neurology at Pitt’s School of Medicine and a co-senior author on the current study published in the Proceedings of the National Academy of Sciences, to tease out the exact role of UCHL1 in stroke and to determine if it could be a viable drug target.

The researchers created a mouse model in which they inserted an altered version of the UCHL1 gene that was resistant to the effects of the CyPgs. They then surgically modelled the effect of a stroke in both genetically engineered and normal mice to compare how the nerve cells recovered.

Preventing CyPgs from inhibiting UCHL1 decreased the amount of injury to the axons after stroke when compared to normal mice. Axons – the long cables projecting outward from the center of the nerve cell – are needed to carry electrical signals and connect to other neurons and make up the bulk of the ‘white matter’ in the brain.

Further experiments showed that keeping UCHL1 active after a stroke helped preserve the function of neurons and brain tissue by activating cellular repair mechanisms that quickly cleaned up damaged proteins, preventing further nerve cell loss. The mice with the resistant form of UCHL1 also had improved recovery of waking, balance and other motor functions.

“While most stroke therapies focus on preventing neuronal death, preserving axonal integrity and decreasing white matter injury could be equally important for improved recovery,” said Graham, who also is a neurologist at the UPMC Stroke Institute. “UCHL1 is a central player in that process.”

Graham and his colleagues are now engaged in efforts to identify new drugs that could prevent CyPgs from binding to UCHL1 or to replace damaged UCHL1 proteins with a derivative that can be given intravenously.

First authors on the study were Hao Liu, M.D., Ph.D., and Nadya Povysheva, Ph.D., both from Pitt’s School of Medicine.