Researchers identify a missing piece of the Lyme disease puzzle 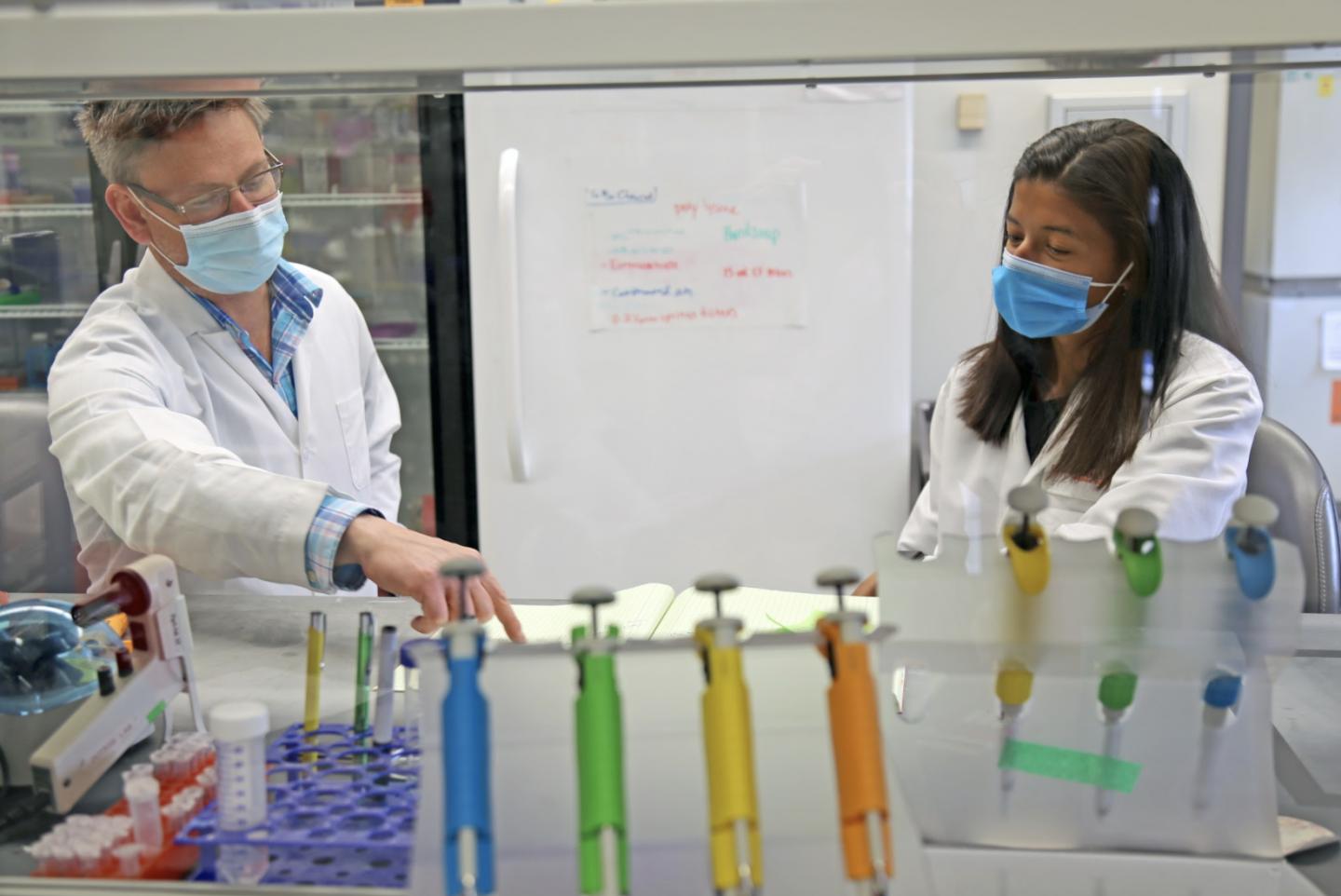 Epidemic. Pandemic. These terms have become second nature to us, popping up in everyday conversation, and for good reason — COVID-19 is the latest pandemic to pose a threat to humanity.

But in recent months, far less attention has been paid to another widely spread problem that has been proliferating since the late 1970s: Lyme disease.

Lyme disease is the most reported vector-borne disease in the country. Over the past 20 years, the United States has experienced a dramatic increase in both the number of reported cases and the geographic distribution of the disease. In Virginia, the disease is transmitted by blacklegged ticks, which are infected with the Lyme disease-causing bacterium Borrelia burgdorferi.

Virginia Tech Assistant Professor Brandon Jutras and his lab have continued to tackle the Lyme disease epidemic over the past year, and they have recently identified another missing piece of the Lyme disease puzzle.

“This discovery furthers our understanding of how Borrelia burgdorferi causes inflammation and disease,” said Mari Davis, who is the lead author on the paper, a former master’s graduate of the Jutras lab in the Department of Biochemistry in the College of Agriculture and Life Sciences. “It is a testament to how unique that this bacterium is — and how we need to keep working to understand more about what is going on behind the scenes in order to develop future diagnostics and treatments.”

Their findings were recently published in PLOS Pathogens, a peer-reviewed open-access medical journal.

Almost all bacteria, including the Lyme disease-causing bacterium, make a mesh-like bag to protect the inside of their cells. This bag is known as peptidoglycan. In 2019, Jutras identified peptidoglycan, a lingering cell wall component of the bacterium Borrelia burgdorferi, as a likely culprit of the inflammation and Lyme arthritis, the most common late-stage symptom of Lyme disease.

Jutras’ previous research has shown that peptidoglycan in Borrelia burgdorferi lingers in the bodies of Lyme arthritis patients after the bacteria has entered the body. Weeks to months after the initial infection, the peptidoglycan remains, inciting inflammation and pain.

In this newest development, the lab discovered a protein associated with the peptidoglycan of Borrelia burgdorferi that plays an amplifying role in causing inflammation in Lyme arthritis patients by acting as a molecular beacon that antagonizes the patients’ immune system.

Using an unbiased proteomics approach and The Mass Spectrometry Research Incubator (VT-MSI) from the Fralin Life Sciences Institute’s Core Services, the team identified the protein to be NapA. NapA, which stands for Neutrophil Attracting Protein A, is a remarkable immunomodulatory molecule that is able to recruit immune cells, called neutrophils, toward the inflammatory peptidoglycan.

“We are thrilled about Dr. Jutras’ NapA discovery, publication, and the implications for Lyme disease diagnostics and treatment. His research perfectly aligns with our institute’s vision to impact society by taking a problem-centric approach to tackling environmental and life sciences-related global challenges,” said Matt Hulver, executive director of the Fralin Life Sciences Institute.

“NapA is another piece to an ever-evolving puzzle; it seems to play a basic role in everyday bacterial life by helping the overall protective properties of peptidoglycan, but it moonlights as a devious protein capable of tricking our immune system,” said Jutras, an affiliated faculty of the Fralin Life Sciences Institute and the Center for Emerging, Zoonotic, and Arthropod-Borne Pathogens.

“We believe NapA’s devious side has two modes: Early in infection, when bacteria are dying and releasing NapA and peptidoglycan, it acts as a decoy to attract immune cells, which allows the viable bacteria to escape and cause disease. In later stages of disease, it may act to attract immune cells to peptidoglycan, a molecule capable of causing inflammation and arthritis,” Jutras said.

To determine how NapA attracted neutrophils, Davis sought out Caroline Jones, who was an assistant professor in the Department of Biological Sciences in the Virginia Tech College of Science at the time of the discovery. Her lab specializes in the study of neutrophil chemoattraction. Jones placed neutrophils in the middle of a microfluidic chip, which acts as a maze that cells can wander through. On one side of the chip, there was pure peptidoglycan, on the other was peptidoglycan with NapA.

The Jones and Jutras labs showed that neutrophils rapidly migrate toward the side with NapA, proving that the protein is able to give off chemical signals that attract neutrophils in the direction of it, and peptidoglycan.

With this new piece to the puzzle in hand, Jutras plans to add to the lab’s current efforts to improve the diagnostic testing and treatment of Lyme disease.

“From a prevention and diagnostic perspective, it’s possible that the combination of peptidoglycan and NapA could be a novel target for diagnostics,” Jutras said. “It could, in theory, be a possible avenue of vaccine development as well. These are big picture possibilities that we are actively pursuing. One thing that we know for sure is that this finding furthers our understanding of how peptidoglycan can drive Lyme arthritis patient symptology.”

Davis, who is in the process of obtaining a medical degree at the Edward Via College of Osteopathic Medicine, will continue to work with the Jutras Lab. She conducted this study with the support of a George Washington Carver Assistantship, which is awarded by the College of Agriculture and Life Sciences annually.

Aaron Brock, a third-year biochemistry Ph.D. student in the Jutras lab and co-author on the NapA study, is the most recent biochemistry recipient of the assistantship.

This project was partially funded by the Steven & Alexandra Cohen Foundation, the National Institute of Allergy and Infectious Disease, internal funding from Virginia Tech, and the support of the Grassi family.