Researchers have discovered how a nanocatalyst works at the atomic level 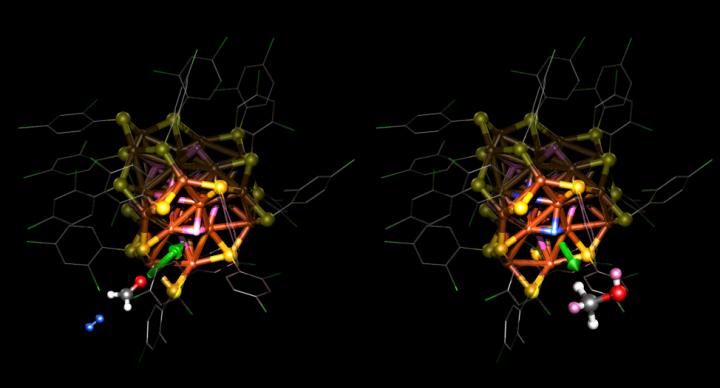 The researchers of the Nanoscience Center (NSC) at the University of Jyväskylä, Finland, and in the Xiamen University, China, have discovered how copper particles at the nanometre scale operate in modifying a carbon-oxygen bond when ketone molecules turn into alcohol molecules. Modification of the carbon-oxygen and carbon-carbon bonds found in organic molecules is an important intermediate stage in catalytic reactions, where the source material is changed into valuable end products.

Understanding the operation of catalysts at the level of the atomic structure of a single particle makes it possible to develop catalysts into desired directions, such as making them efficient and selective for a specific desired end-product. The study was published in the internationally recognised ACS Nano nanoscience publication series. In Finland, the study was led by Academy Professor Hannu Häkkinen.

The catalytic copper particles used in the study were made and structurally characterized at the Xiamen University, and their operation in changing a strong carbon-oxygen bond in a hydrogenation reaction was studied by the researchers of the Nanoscience Center (NSC) at the University of Jyväskylä in computer simulations. The precise atomic structure of the copper particles was determined through X-ray diffraction and nuclear magnetic resonance (NMR) spectroscopy. The particles were found to contain 25 copper atoms and ten hydrogens, and there were 18 thiols protecting the surface of the particle. While the experimental work in Xiamen revealed its excellent performance in catalytic hydrogenation of ketones, the simulations predicted that the hydrogens bound to the copper core of the particle act as a hydrogen storage, which releases two hydrogen atoms to the carbon-oxygen bond during a reaction. The hydrogen storage is refilled after the reaction, when a hydrogen molecule attached to the particle from its surroundings splits into two hydrogen atoms, which are bound again to the copper core (see image). The NMR measurements carried out in Xiamen revealed an intermediate product of the reaction, which confirmed the predictions of the computational model.

“This is one of the first times in the whole world when it has been possible to discover how a catalytic particle works when its structure is known this accurately, thanks to a cooperation involving both experiments and simulations,” says Academy Professor Hannu Häkkinen from the University of Jyväskylä, who led the computational part of the study.

Häkkinen’s collaborator, Karoliina Honkala, Professor of computational catalysis, continues: “Traditionally, expensive platinum-based catalysts are used in hydrogenation reactions. This study proves that nanoscale copper hydride particles also act as hydrogenation catalysts. The results give hope that in the future, it will be possible to develop effective and inexpensive copper-based catalysts to transform functionalised organic molecules into products with a higher added value.”

In addition to Häkkinen and Honkala, Postdoctoral Researcher Nisha Mammen, Doctoral Student Sami Kaappa and Senior Researcher Sami Malola from the University of Jyväskylä participated in the study. The research conducted by the groups of Häkkinen and Honkala was supported by the Academy of Finland. The computer simulations in the study were carried out by the supercomputers of the CSC – IT Center for Science. The experimental work of the study was carried out by the group of Professor Nanfeng Zheng from the Xiamen University.

IMAGE: Atomic structure of the copper catalyst used in the hydrogenation reaction of a carbon-oxygen bond. Formaldehyde H2CO (on the left), used as the model molecule in the simulations, takes two hydrogens from the copper; they move to the carbon-oxygen bond so that the molecule changes into a simple alcohol (methanol CH3OH on the right). After the reaction, a hydrogen molecule (blue, on the left) in the vicinity splits into two hydrogen atoms inside the copper.