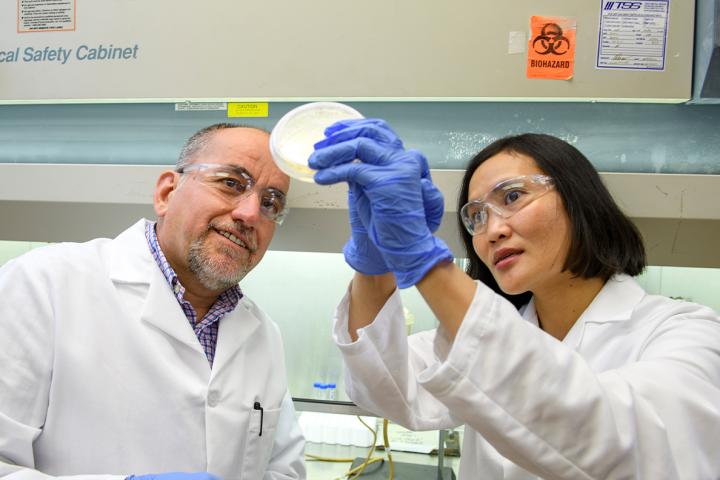 PULLMAN, Wash. – Washington State University researchers have for the first time grown the bacteria in a laboratory that causes Citrus Greening Disease, considered the world’s most harmful citrus disease.

Being able to grow the elusive and poorly understood bacterium, Candidatus Liberibacter asiaticus (CLas), will make it easier for researchers to find treatments for the disease that has destroyed millions of acres of orange, grapefruit and lemon groves around the world and has devastated the citrus industry in Florida.

The researchers, including Phuc Ha, postdoctoral research associate, Haluk Beyenal, Paul Hohenschuh Professor in the Gene and Linda Voiland School of Chemical Engineering and Bioengineering, David Gang and Ruifeng He, from WSU’s Institute of Biological Chemistry, Anders Omsland, from the Paul G. Allen School for Global Animal Health, and researchers from the University of Florida and University of Arizona, report on their work in the journal, Biofilm.

WSU was selected three years ago for a $2 million U.S. Department of Agriculture grant to study the bacteria, in part, because Washington has no citrus industry. The disease, formally known as Huánglóngbìng, (HLB), is spread by Asian citrus psyllids insects. It attacks the vascular system of citrus trees and causes fruit to become green, misshapen, and bitter-tasting.

A critical step in coming up with weapons to fight the disease is being able to study it in the lab, but the CLas bacterium is notoriously difficult to grow. With a small genome, CLas is thought to depend on very specific nutrient availability and possibly compounds secreted by other nearby bacteria. When researchers used a traditional rich media that they typically use for growing bacteria, they mostly grew bacteria other than CLas.

So, in order to conduct research, scientists have had to get bacterial samples directly from the trees themselves or from the insects that spread it, which is time-consuming and cumbersome. Trying to conduct experiments has also been difficult because, unlike neat lab cultures, bacterial samples gathered from a sick tree vary, depending on where and when the sample is gathered and the level of infection.

Without being able to grow the bacteria in a lab, researchers have been unable to even absolutely confirm that the bacteria, in fact, causes the disease.

In their paper, the researchers for the first time successfully established and maintained CLas bacterial cultures outside of its host.

Using infected citrus tissue as their starting point, the researchers developed a biofilm, a kind of bacterial city that allows a variety of bacteria to thrive. Instead of a rich growth medium that would crowd out the CLas, the researchers severely limited the growth of partner bacteria and created a medium with the specific nutrients, acidity, incubation temperatures, and oxygen levels that are optimal for CLas.

“We were really excited,” said Beyenal, “but then we wondered if we could re-grow it.”

The researchers were able to transfer the orange-colored culture and grow new cultures in their biofilm reactors, which they have maintained for more than two years.

“We can do this for as long as we want,” said Beyenal.

Beyenal’s group is now working to purify the culture, which will further help researchers to study it.  They are also developing genetic-based methods to understand and mitigate the spread of the disease.

Parents to learn signs of sepsis

Discovery paves path forward in the fight against the deadliest form…