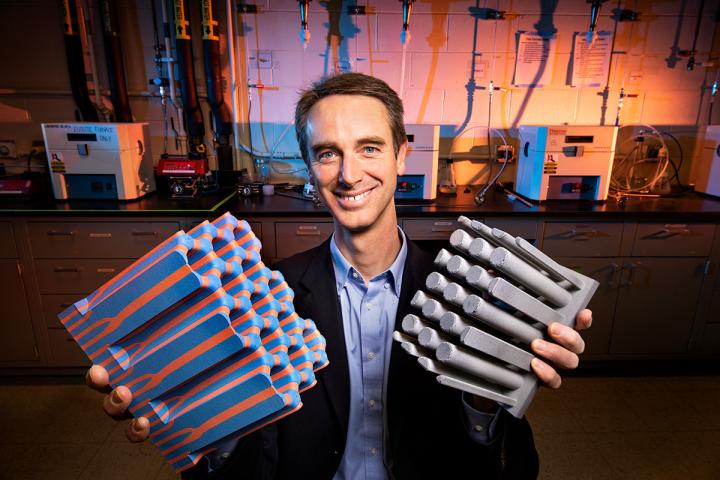 CHAMPAIGN, Ill. — Composites made from self-assembling inorganic materials are valued for their unique strength and thermal, optical and magnetic properties. However, because self-assembly can be difficult to control, the structures formed can be highly disordered, leading to defects during large-scale production. Researchers at the University of Illinois and the University of Michigan have developed a templating technique that instills greater order and gives rise to new 3D structures in a special class of materials, called eutectics, to form new, high-performance materials.

The findings of the collaborative study are published in the journal Nature.

Eutectic materials contain elements and compounds that have different melting and solidification temperatures. When combined, however, the composite formed has single melting and freezing temperatures – like when salt and water combined to form brine, which freezes at a lower temperature than water or salt alone, the researchers said. When a eutectic liquid solidifies, the individual components separate, forming a cohesive structure – most commonly in a layered form. The fact that eutectic materials self-assemble into composites makes them highly desirable to many modern technologies, ranging from high-performance turbine blades to solder alloys.

“Having a single melting point has advantages in composite materials processing,” said Paul Braun, a professor of materials science and engineering and director of the Materials Research Lab at the U. of I., who led the project. “Instead of depositing layers of material individually, we start with a liquid that self-assembles as it solidifies. This can speed up production and allows us to make larger volumes at one time.”

However, self-assembly can lead to problems, he said, as its uncontrolled nature can form defects.

“Templating is a common practice used in organic polymers processing,” said Ashish Kulkarni, an Illinois graduate student and the first author of the study. “However, it is not something that has been explored in inorganic materials processing because inorganic microstructures are more rigid and harder to control.”

To demonstrate this process in the lab, the team built templates with tiny posts arranged in hexagonal shapes to control the resolidification of a melt containing silver chloride and potassium chloride – a eutectic material that naturally forms layers as it cools.

“If not controlled, the only microstructures this system will form are layers,” said Katsuyo Thornton, a professor of materials science and engineering at Michigan, who conducted computer simulations with graduate student Erik Hanson, both of whom are study co-authors. “We can vary the cooling rate to make the layers thicker or thinner, but the pattern stays the same. By adding a template that the liquid solidifies around, we hoped new patterns would emerge.”

The team found that as the silver and potassium chloride melt to solidify around the hexagonal-shaped templates, the posts get in the way of the layer formation and produce a composite with an array of different square, triangular and honeycomb-shaped microstructures instead – the specifics of structure depending on the distance between the posts on the template.

“The repeating nature of these templates and newly formed structures reduces the chances for defects to form,” Braun said. “So, not only did we form exciting new microstructures, but we also reduced the number of defects in the resulting composite material.”

The researchers will explore how the new microstructures influence the physical properties of a wide range of eutectic materials.

“The materials we used in our experiments are transparent, so the first direction to head in might be to explore optical materials, and there is a lot of potential in the area of photonic crystals,” Braun said. “We’re still a long way from real application, but the possibilities are abundant.”

This research was supported by the Air Force Office of Scientific Research.

Study: Pig virus is easily transmitted among chickens and turkeys