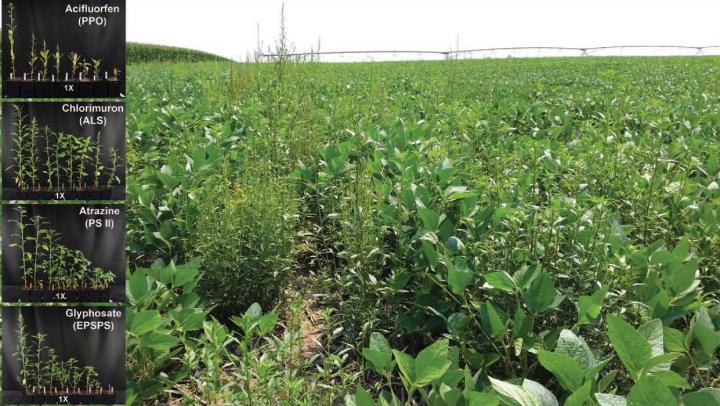 WESTMINSTER, Colorado – September 13, 2019 – A research study featured in the journal Weed Science provides worrisome new details about the evolution of herbicide resistance in waterhemp – an annual weed that represents a significant threat to Midwest corn and soybean crops.

When a waterhemp biotype in eastern Nebraska survived a post-emergent application of the PPO inhibitor fomesafen, a team of university scientists decided to take a close look. They discovered the population was resistant to four distinct herbicide sites of action, including PPO inhibitors, ALS inhibitors, EPSPS inhibitors and PS II inhibitors.

“Our study showed there simply are no effective post-emergent herbicide choices for the control of resistant waterhemp in either glyphosate-resistant or conventional crops,” said Debalin Sarangi, a postdoctoral researcher at the University of Nebraska-Lincoln. “Growers will need to diversify their approaches to weed management and complement the use of chemicals with cultural and mechanical controls.”

To learn more, read the article “Protoporphyrinogen Oxidase (PPO) Inhibitor-Resistant Waterhemp (Amaranthus tuberculatus) from Nebraska is Multiple Herbicide-Resistant: Confirmation, Mechanism of Resistance, and Management.” It is available online at www.cambridge.org/core/journals/weed-science.

Weed Science is a journal of the Weed Science Society of America, a nonprofit scientific society focused on weeds and their impact on the environment. The publication presents peer-reviewed original research related to all aspects of weed science, including the biology, ecology, physiology, management and control of weeds. To learn more, visit http://www.wssa.net.

Exposing vaccine hesitant to real-life pain of diseases makes them…