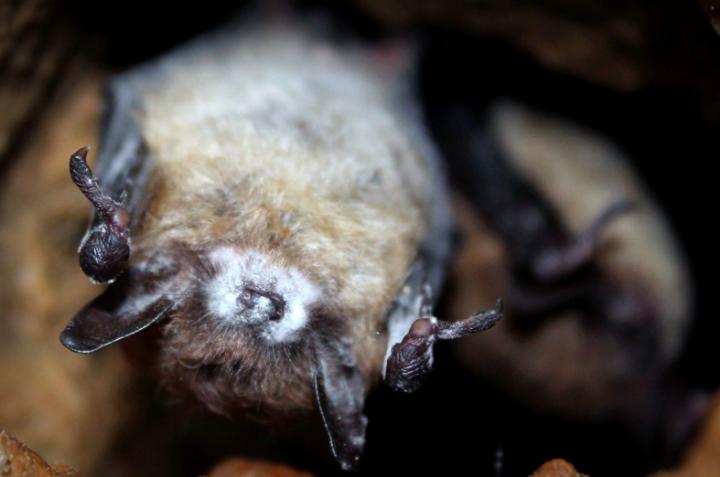 It is widely accepted that probiotic bacteria are beneficial to human health, but what if they could also be used to reduce wildlife disease and conserve biodiversity?

Researchers from Virginia Tech and UC Santa Cruz did just that in a field trial on the effect of probiotic bacteria on white-nose syndrome in bat populations. They found that it reduces the impact of the disease about five-fold.

These findings were published recently in Scientific Reports.

Bats are dominant night-time insect predators that can greatly benefit agriculture, but their populations are being decimated by the fungal disease called white-nose syndrome.

White-nose syndrome has destroyed bat populations across Eastern North America, and it shows no signs of stopping as it spreads westward.

“Our results suggest that the probiotic bacteria, Pseudomonas fluorescens, is a useful tool for reducing white-nose syndrome impacts on bat populations, particularly if combined with other management tools,” said Joseph Hoyt, a research scientist in the Department of Biological Sciences in the College of Science.

“With the severity of white-nose syndrome declines and facing the potential extinction of some species, it’s essential that we consider out-of-the-box solutions to reducing population impacts. Given the notorious difficulty of treating fungal infections in mammals, probiotics are a sensible solution for reducing fungal burdens of animals,” said Kate Langwig, the second author of this paper and an assistant professor in the Department of Biological Sciences in the College of Science and an affiliated faculty member of the Global Change Center.

White-nose syndrome is a disease that spreads in the winter and causes bats to leave their roosts during hibernation. The fungus, which kills the bats over several months, depletes the bats’ fat stores, forcing them to expend even more energy on finding food that isn’t available during the harsh winter. Eventually, most bats die of starvation or exposure to the cold.

Researchers are seeing declines that are rendering some bat species functionally extinct. Specifically, the little brown bat, Northern long-eared bat, Indiana bat, and the tri-colored bat populations have declined by 70 to 99 percent across 44 states since 2006.

“Little brown bats were not an uncommon species prior to the emergence of this disease. It would be like losing robins from the bird community. These are abundant backyard species that you would see at nighttime that have essentially been removed,” Hoyt said.

One species, the Northern long-eared bat, has been extirpated from most of its range by white-nose syndrome. “As far as mainland populations go, if we see a single bat all winter – that’s a lot,” Hoyt said. “At this point, it may be too late for that species in terms of trying save it. I think its demise happened so quickly that it was not something that anyone could respond to fast enough.”

Populations of little brown bats, Northern long-eared bats, tri-colored bats, and the big brown bats were sampled for the bacteria Pseudomonas fluorescens to make sure similar bacteria were naturally present before introducing a higher dosage in the experimental treatment.

In an abandoned mine in Wisconsin, Hoyt and his research team tested the efficacy of P. fluorescens in two simultaneous experiments with caged and free-flying little brown bats. All the bats were tagged with a passive integrated transponder (PIT), which allowed researchers to identify and keep track of when individual bats emerged from the mine.

The purpose of doing the free-flying experiment was to conduct a natural field trial, where bats can move freely and interact with the environment the way that they normally would. Researchers found that measuring the amount of pathogen associated with each bat helped them to better predict the bat’s survival time. Interestingly, researchers also saw that treatment with P. fluorescens lengthened the amount of time that bats stayed in the mine.

“Our treatment delayed emergence time, which would put more bats emerging during spring-time when there are insects available for them to eat, allowing them to recover from the disease,” Hoyt said.

The caged experiment was meant to counteract the uncertainty of the free-flying experiment by keeping them in a controlled area, while providing researchers key information about how or why they died. However, Hoyt said that, in general, bats are challenging to work with.

“In our caged experiment, there were some individuals that got really sick and likely influenced, or biased, our survival estimates for other individuals.” In the end, the researchers found that the amount of fat that a bat had was the only important factor in predicting their survival in the cage trial, not how infected they were.

In the free-flying experiment, their controls had only 10 percent survivability while their treatment group had 50 percent. Hoyt and his team are thinking of ways that the probiotic treatment can be developed to further increase survival. Currently, researchers are testing to see if pairing probiotics with other forms of treatment can increase survival even more.

This is one of the first published papers that show that a probiotic can reduce the impact of pathogens on wildlife. “It’s some potential hope that with the right organism and by tinkering around with different techniques, we can start to develop things similar to what has been done with humans,” Hoyt said.

As far as what you can do to help the bats, there are many ways to be “bat-friendly.” For instance, there are guidelines that you can follow that will help reduce the impact that we have on bats. Putting up bat-boxes, protecting waterways, and changing landscaping to provide insects for bats are good places to start.

In addition to Hoyt and Langwig, who are both affiliated faculty members of the Fralin Life Sciences Institute, the coauthors of the paper include Paul White, Heather Kaarakka, and Jennifer Redell at the Wisconsin Department of Natural Resources; Winifred Frick at Bat Conservation International and UC Santa Cruz; Katy Parise and Jeffrey Foster at the University of New Hampshire; and Marm Kilpatrick at UC Santa Cruz.

Reining in the ecological effects of free-roaming horses

Scientists call for infiltration to be better incorporated into land surface…