During brain development, neurons have to migrate long distances through complex environments until they reach their final destination. In order to find guidance, they must establish several interactions —which are still hard to study— between their receptors and the surrounding molecules. Now, a paper published in the prestigious journal Cell has identified how two different proteins, the neuronal receptor Unc5 and the molecule Glipican 3 (GPC3), collaborate decisively in the guidance of neurons in two different processes: brain formation and the propagation of brain-derived cancer cells (neuroblastoma). 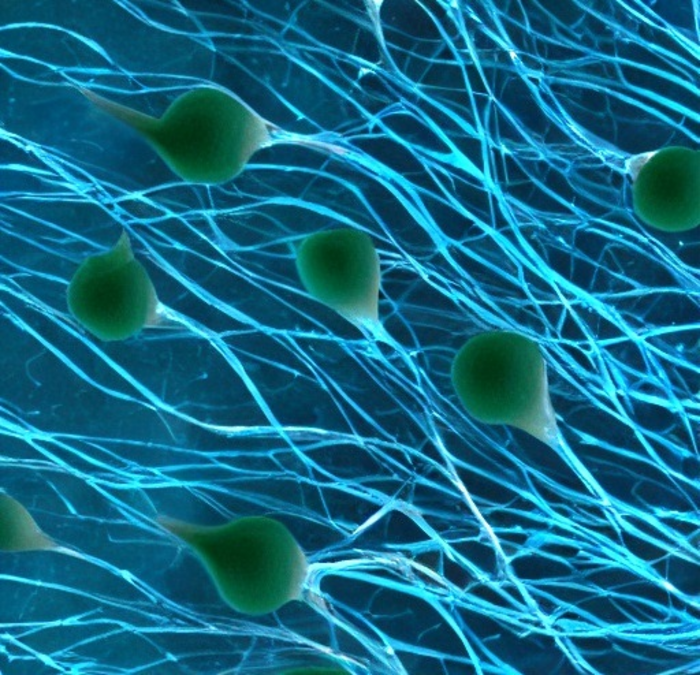 During brain development, neurons have to migrate long distances through complex environments until they reach their final destination. In order to find guidance, they must establish several interactions —which are still hard to study— between their receptors and the surrounding molecules. Now, a paper published in the prestigious journal Cell has identified how two different proteins, the neuronal receptor Unc5 and the molecule Glipican 3 (GPC3), collaborate decisively in the guidance of neurons in two different processes: brain formation and the propagation of brain-derived cancer cells (neuroblastoma).

The paper identifies the spots where both proteins connect, it reveals the structure of the new Unc5-GPC3 complex and it determines its key role in neuron migration and certain tumours. It also delves into the mechanisms that regulate cell migration in a precise way, and it states how some molecular mechanisms that regulate cell migration are highly conserved between neurons and some brain tumours.

During the development of the cerebral cortex, neurons use fibres that originate from their stem cells, called radial glia, as highways to reach their final position. During migration, neurons must interact with these fibres, but both the proteins involved and how they interact are quite unknown.

Gaining a detailed insight into the molecular guidance mechanisms of brain cells during brain development is a rather complicated goal. In this study, the collaboration and expertise of the three scientific teams has led to the identification of the interaction between the two proteins Unc5 and GPC3 and detailed insight into how they bind through the carbohydrates they carry to the surface.

“The study reveals for the first time a new complex formed by the protein Unc5, present in neurons, and the compound GPC3, which is found in the fibres through which these cells migrate. When they interact with each other, the Unc5-GPC3 protein complex is formed, which facilitates the migration of neurons on the fibres”, says Daniel del Toro, a member of the Department of Biomedicine of the UB.

The discovery of molecular guidance mechanisms in brain cells was made possible by structural analyses of the protein complex. By identifying the binding sites between the proteins, the team was able to generate tools to control their interaction and identify the specific function of this protein complex. “A very surprising result was to find that the complex itself regulates the migration of cells as different as neurons and certain brain tumours such as neuroblastoma”, says the researcher.

The study focused on the analysis of the migration of the main neurons of the cerebral cortex, a decisive process for the correct formation of the neural circuits that regulate the most sophisticated cognitive functions (language, cognition, abstract thought, etc.). However, the team has found that the Unc5-GPC3 complex is present in other regions of the brain and, consequently, other neurons could also use it to migrate. “For example, other neurons —known as interneurons— also reach the cerebral cortex and express proteins from this complex. Therefore, it will be very interesting to test the functions of this complex in other neuronal types in future studies”, says Daniel del Toro.

To date, it was thought that cells used different mechanisms to migrate in completely independent biological environments, but the new results suggest that the guidance mechanisms during cell migration can be shared and reused by different cell types. This implies that the knowledge tools generated in this study can be applied in very different contexts, such as the migration of other cell types, or the application of new strategies to control this process in certain pathologies, such as cancer.

It should be borne in mind that in the case of certain tumours, such as neuroblastoma, the expression of the Unc5 protein is very high. “Therefore, we think that this factor could also regulate the migration and spreading of this tumour cell, which is the field of study of the Lyon team. Given that the other protein in the complex, GPC3, is highly expressed in other types of tumours, it is very likely that the same complex could be formed in other cancers. Thus, the tools developed in this study will allow us to study it in future studies”, notes the expert.

The UB team has focused on studying the role of the Unc5-GPC3 complex in neuronal migration. In the laboratories, the team identified the presence of this new protein complex in the brain during brain development. Based on this finding, they focused their research on the study of this complex during the migration of neurons in the cerebral cortex. Using different techniques, they modified the binding sites of these proteins in mouse brains and this has allowed them to demonstrate their function during the process.

Methodologically, it has also been decisive to obtain the structure of the protein complex through X-ray crystallography to determine the binding sites between the proteins. Thanks to this contribution of the Oxford group, it has been possible to develop very small antibodies (nanoantibodies) that can facilitate or block the formation of this complex. “We have been able to introduce these nanoantibodies into the brain while it was still in the development phase to see how this complex regulates the migration of neurons. In addition, we have also applied microfluidic methods to study the behaviour of cortical neurons using structure-based protein engineering”, says del Toro.

Alterations in the migration process of neurons in the cerebral cortex can cause cognitive alterations and learning problems, among others. From a more clinical perspective, in the case of tumours such as neuroblastoma, all the processes that regulate their dissemination have a great impact on the prognosis of the pathology.

“The results and tools generated by the study of the Unc5-GPC3 complex in migrating neurons are ideal for future studies on its function in the brain. In particular, this study gives us the tools to study the functions of the complex in other systems in which it operates, such as in different regions of the brain during development or in the migration of other tumours. Given that the proteins that form the complex can interact with other components, it will be interesting to discover whether this complex can be modified by incorporating new proteins to adapt the response of the cells as they migrate through different environments”, concludes the researcher Daniel del Toro.