PULLMAN, Wash. – As the Major League Baseball season gets underway, a burning question for many fans of the third most popular sport in the United States is how many homeruns they will see this season. 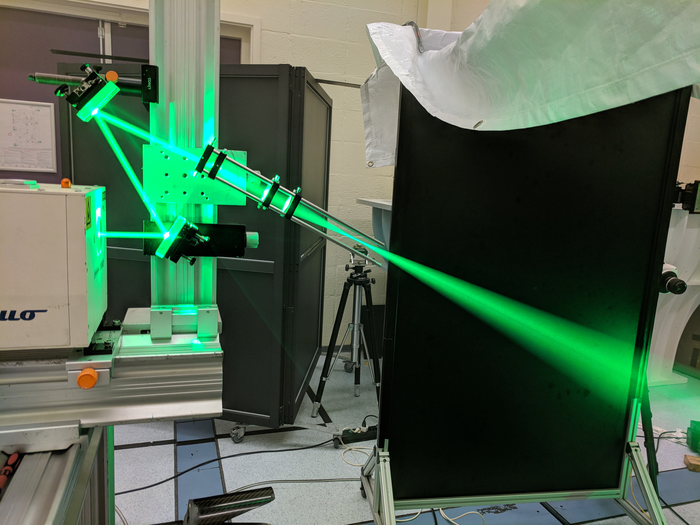 PULLMAN, Wash. – As the Major League Baseball season gets underway, a burning question for many fans of the third most popular sport in the United States is how many homeruns they will see this season.

A new laboratory method uses a high-accuracy ball delivery device and speed measurement system to provide better clues on exactly how high and far some of those baseballs will fly.

Reporting in the journal, Applied Sciences, Washington State University and Delft University of Technology researchers describe the new technique, which entails firing the baseballs through a line of sensors and measuring the change in speed as they travel along a trajectory. The work allows for more precision than traditional wind tunnel measurements because it doesn’t require the ball to sit on a perched platform, which creates a small but important inaccuracy.

“My lab happens to perform the most accurate test in the world of this property,” said Lloyd Smith, professor in the School of Mechanical and Materials Engineering and lead author on the paper. “Not many people care about lift and drag to the level that we do, but people do care in baseball games.”

While baseball is a popular sport, the aerodynamic properties of baseballs have not been fully understood. It turns out that very small changes in drag can matter a lot in the game, Smith said.

To assure a uniform and consistent playing experience, Major League Baseball only uses one manufacturer, Rawlings Sporting Goods, which follows strict protocols in making the balls. The ball has a cork rubber pill wrapped in three layers of a specific weight of wool and covered with leather. The construction of the pill, wool and leather are carefully defined, measured and controlled—even the color of the rubber has to be consistent. More than 200 people work for the company just to carefully sew the seams for the baseballs.

“I never thought in my wildest dreams that I would be differentiating between belly leather and back leather on a ball, but I am, and it turns out that the two kinds of leather are different on a ball, and you’ll find less belly leather than you would have a few years ago,” said Smith.

Everything is measured to be uniform, including the ball’s weight, size, hardness and elasticity, and to maintain fair play, Major League Baseball rules even require that the ball only be used for one play before it’s discarded.

In spite of that uniformity, starting in 2015 and with virtually the same baseball, hitters started making a lot more homeruns.

“The assumption was that if you made the ball the same way, that those properties would always come out the same way,” said Smith. “We found out that something changed.”

When the Major League Baseball organization commissioned a panel to study the unprecedented and dramatic change, researchers found that a tiny decrease in the ball’s aerodynamic drag of just 3% was responsible for the dramatic change in homeruns. They found that a small change in the height of the seams in the ball may have caused at least some of the change.

But during those investigations, the researchers determined that wind tunnel measurement techniques couldn’t adequately capture the tiny changes in drag that might make a huge difference in homeruns. Wind tunnels are used to measure drag forces in everything from airplane wings to cars and bikes, but they’re not ideal for baseballs.

“You have to hold onto the ball in some way,” said Smith, “and that means there’s always going to be some imperfection when you’re using a wind tunnel to measure drag.”

With their laser-guided speed measurement system, the researchers were able to precisely measure change in speed and then determined acceleration, the forces on the ball, and its lift and drag.

“We had to go back and look at what we can do to make this even more accurate, and we did,” Smith said. “It hasn’t been simple to do, and we spend a lot of time calibrating every day just to make sure that our sensors are telling us what we think they are, but we now believe that the drag measurements we’re making are going to be able to sound the alarm if there’s a change.”

Or if the players start knocking balls out of the park.

The techniques could be used for other applications in a number of sports, from cricket to soccer, Smith said. After all, aerodynamics matter for winning games.

“Very small differences can make a big difference,” he said.