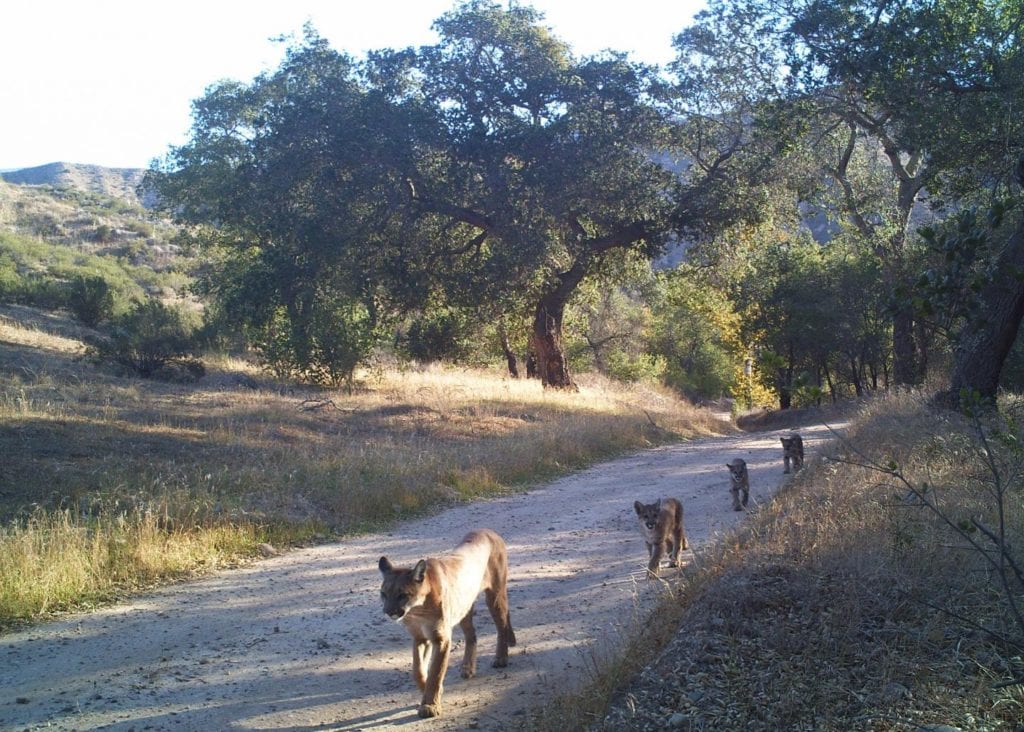 Fragmentation of wildlife populations is increasing on a global scale, and understanding current genetic structure, genetic diversity and genetic connectivity is key to informing future wildlife management and conservation.

This is true of mountain lion — also known as pumas or cougars — populations in California, according to a new study conducted by a University of Wyoming research team.

“Large expanses of continuous habitat provide populations the opportunity to maintain large numbers of gene variants, called alleles. This is analogous to a deck of cards. If you have 40 cards, you are capable of harboring more types of cards than if you had 10,” says Kyle Gustafson, an assistant professor of genetics in the Department of Biology and Environmental Health at Missouri Southern State University, but who started this work in Holly Ernest’s Wildlife Genomics and Disease Ecology Lab at UW. “When populations get isolated, like many of the puma populations surrounded by urbanization, the only way for them to maintain a large number of alleles is through migration. Otherwise, natural selection and genetic drift will ultimately lead to genetic uniformity (fixation) and mating among related individuals (inbreeding).”

The new study, titled “Genetic Source-Sink Dynamics Among Naturally Structured and Anthropogenically Fragmented Puma Populations,” was published Dec. 10 in Conservation Genetics, a journal that promotes the conservation of biodiversity by providing a forum for data and ideas, aiding the further developments of this area of study. Contributions include work from the disciplines of population genetics, molecular ecology, molecular biology, evolutionary biology, systematics and forensics.

Gustafson is the paper’s lead author. Ernest, a professor in the UW Program in Ecology and the Wyoming Excellence Chair in Disease Ecology, was the senior and corresponding author. Roderick Gagne, a former postdoctoral research associate in the UW Department of Veterinary Sciences, was a contributing author.
“This study took nearly two decades for my lab to complete and could only be accomplished through coordinated efforts with the California Department of Fish and Wildlife, multiple research institutions and several nonprofit organizations,” Ernest explains.

The analyses revealed that mountain lions in California exhibited strong population genetic structure, and some California populations had extremely low levels of genetic diversity, with some exhibiting estimates as low as the endangered Florida panther, another common name for the puma. Nine genetic populations of pumas were identified in California and one population in Nevada.

During the study, 992 mountain lions across California and Nevada were genotyped at 42 microsatellite loci. Microsatellites are neutral gene mutations, meaning they don’t code for a specific trait, so their mutations can accumulate without causing harm. Loci are different locations on chromosomes.

“If you could imagine each card in a standard deck of 52 cards as a unique mutation and, if you could imagine each mountain lion holding a card, then you could see how we could group certain mountain lions together,” Gustafson explains. “For example, we could lump mountain lions together if they were holding red cards, face cards or a specific number. By keeping track of the many DNA mutations and, by using dozens of hypothetical decks of cards, we can identify shared mutations among the individuals and then identify genetic populations.”

Gene flow is critically important to individual fitness and to the evolutionary potential of populations because successful migrant animals can diversify gene combinations. Without gene flow, small populations are especially subject to inbreeding, genetic drift and increased extinction risk.

The paper’s results have far-reaching conservation and management implications for mountain lions and indicate large-scale fragmentation in one of North America’s most biodiverse and rapidly urbanized areas. Whenever possible, government agencies and other stakeholders should consider population connectivity and prevent further fragmentation by human development, both within and among populations.