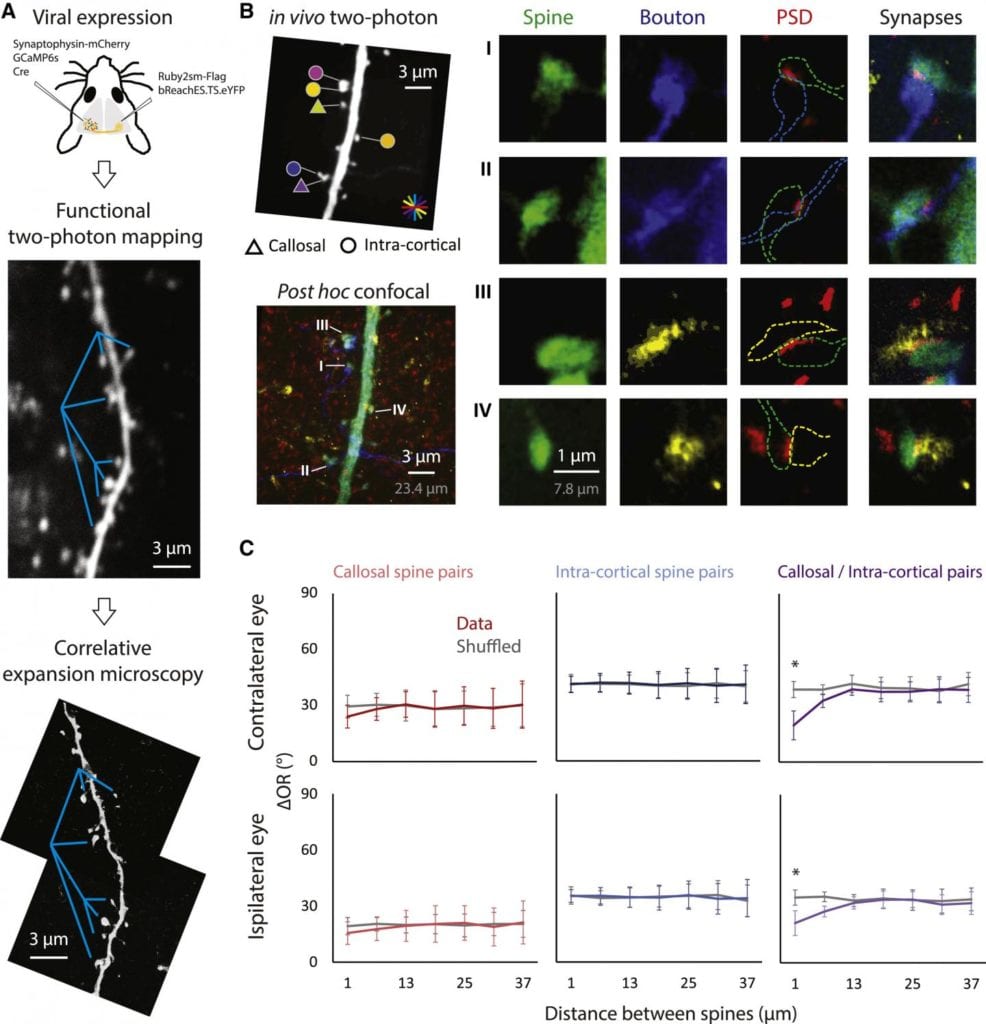 Researchers at the Max Planck Florida Institute for Neuroscience have developed a new combination of technologies that allows them to identify the functional properties of individual synapses that link the two hemispheres and determine how they are arranged within a neuron’s dendritic field.

Each of the 20 billion neurons in the cerebral cortex receives thousands of synaptic connections from other neurons, forming complex neural networks that make sensation, perception, movement, and higher cognitive functions possible. Ultimately the function of these networks depends on events that occur within a neuron’s dendrite– extensions from the neuron’s cell body that resemble branches of a tree and receive synaptic connections from the axons of other neurons, A critical piece of the puzzle of cortical networks that continues to challenge neuroscientists is understanding the functional organization of synapses within a neuron’s dendritic field. This requires determining the functional properties of the synaptic inputs a neuron receives (what they are communicating), the source of the inputs (where they are coming from), and how they are arranged within the dendrite. In a new article in Neuron, MPFI researchers detail how they recently devised new methods to answer these questions, revealing a functional order to the arrangement of distant and local synaptic inputs within a neuron’s dendritic field that may play an important role in coordinating network activity.

Graduate student Kuo-Sheng Lee, along with other members of the Fitzpatrick lab, explored this question in the mouse visual cortex by mapping the synaptic inputs that link the two cortical hemispheres via a fiber bundle called the corpus callosum. This pathway is thought to play a critical role in coordinating the activity of the two cerebral hemispheres, and, for the visual system, unifying our binocular view of the world. They developed an approach that would permit them to visualize the individual dendritic spines of a neuron (small dendritic specializations that receive excitatory synaptic inputs), characterize their functional properties, and determine whether they receive callosal inputs.

To visualize the activity of individual dendritic spines, Lee et al., used an advanced imaging technique that relies on calcium signals that are detected as changes in fluorescence. By watching the dendritic spines ‘light up’ with activity in the living brain, they could present different visual stimuli to the animal and determine which was most effective. The dendritic spines, like most of the cells in visual cortex, respond selectively to the orientation of edges in the visual scene, so this was the functional property they chose to define for each spine. Then to determine whether a spine received synaptic input from the callosum, Lee et al. used direct stimulation of the other hemisphere and looked to see which of the dendritic spines would light up. Having found that a small percentage of spines were reliably and consistently activated by stimulating callosal inputs, then they were ready to address how are they were arranged within the dendritic field.

Lee et al. recognized that their conclusions would be strengthened if they could confirm the functional evidence for orderly local and callosal connectivity with another experimental approach: defining the synaptic connections anatomically. To accomplish this, they used a novel technique called expansion microscopy to anatomically visualize the nanoscale synaptic contacts with conventional light microscopy. The results were consistent with the functional stimulation results, demonstrating that callosal inputs and local inputs (derived from the region right around the targeted neuron) that exhibit similar or¬ientation preference are clustered within the dendritic field.

These observations put the concept of functional clustering into a whole new context: ‘birds of a feather flock together’ and ‘opposites attract’. Functional clustering represents a fine scale spatial pattern of specificity in connections within the dendritic field that can bring together inputs that have similar properties and are derived from different networks. Combined with the evidence that functional clustering of spines in the dendritic field can amplify their impact on neuronal response, neurons in the visual cortex could use this strategy to generate robust responses to orientation-matched inputs from the two hemispheres, contributing to a seamless perception of the visual world. A similar structure may apply to callosal connections that link other areas of the cortex, a fine-scale organization of synapses within the dendrites of individual neurons that has ramifications for large-scale network function.

About the Max Planck Florida Institute for Neuroscience:

The Max Planck Florida Institute for Neuroscience (MPFI), a not-for-profit research organization, is part of the world-renowned Max Planck Society, Germany’s most successful research organization with over 80 institutes worldwide. Since its establishment in 1948, 18 Nobel laureates have emerged from the ranks of its scientists. As its first U.S. institution, MPFI brings together exceptional neuroscientists from around the world to answer fundamental questions about brain development and function and to develop new technologies that make groundbreaking scientific discoveries possible. Their research is shared publicly with scholars, universities and other organizations around the globe, providing the necessary foundation of knowledge to develop treatments and cures for brain disorders such as autism, schizophrenia, Parkinson’s disease and Alzheimer’s disease. For more information, visit http://www.maxplanckflorida.org.