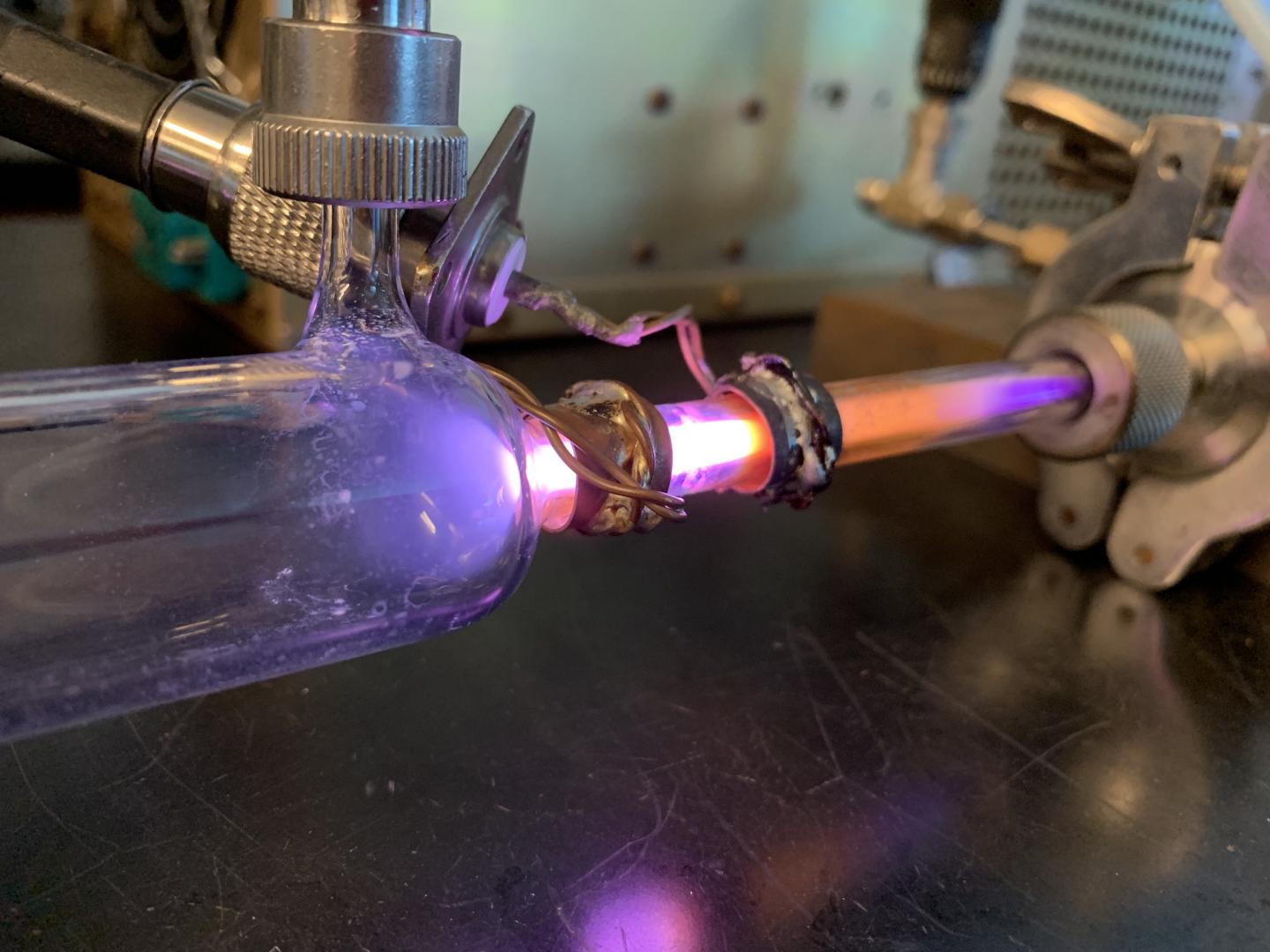 A team of researchers at The University of Texas at Austin and the University of California, Riverside have found a way to produce a long-hypothesized phenomenon–the transfer of energy between silicon and organic, carbon-based molecules–in a breakthrough that has implications for information storage in quantum computing, solar energy conversion and medical imaging. The research is described in a paper out today in the journal Nature Chemistry.

Silicon is one of the planet’s most abundant materials and a critical component in everything from the semiconductors that power our computers to the cells used in nearly all solar energy panels. For all of its abilities, however, silicon has some problems when it comes to converting light into electricity. Different colors of light are comprised of photons, particles that carry light’s energy. Silicon can efficiently convert red photons into electricity, but with blue photons , which carry twice the energy of red photons, silicon loses most of their energy as heat.

The new discovery provides scientists with a way to boost silicon’s efficiency by pairing it with a carbon-based material that converts blue photons into pairs of red photons that can be more efficiently used by silicon. This hybrid material can also be tweaked to operate in reverse, taking in red light and converting it into blue light, which has implications for medical treatments and quantum computing.

“The organic molecule we’ve paired silicon with is a type of carbon ash called anthracene. It’s basically soot,” said Sean Roberts, a UT Austin assistant professor of chemistry. The paper describes a method for chemically connecting silicon to anthracene, creating a molecular power line that allows energy to transfer between the silicon and ash-like substance. “We now can finely tune this material to react to different wavelengths of light. Imagine, for quantum computing, being able to tweak and optimize a material to turn one blue photon into two red photons or two red photons into one blue. It’s perfect for information storage.”

For four decades, scientists have hypothesized that pairing silicon with a type of organic material that better absorbs blue and green light efficiently could be the key to improving silicon’s ability to convert light into electricity. But simply layering the two materials never brought about the anticipated “spin-triplet exciton transfer,” a particular type of energy transfer from the carbon-based material to silicon, needed to realize this goal. Roberts and materials scientists at UC Riverside describe how they broke through the impasse with tiny chemical wires that connect silicon nanocrystals to anthracene, producing the predicted energy transfer between them for the first-time.

“The challenge has been getting pairs of excited electrons out of these organic materials and into silicon. It can’t be done just by depositing one on top of the other,” Roberts said. “It takes building a new type of chemical interface between the silicon and this material to allow them to electronically communicate.”

Roberts and his graduate student Emily Raulerson measured the effect in a specially designed molecule that attaches to a silicon nanocrystal, the innovation of collaborators Ming Lee Tang, Lorenzo Mangolini and Pan Xia of UC Riverside. Using an ultrafast laser, Roberts and Raulerson found that the new molecular wire between the two materials was not only fast, resilient and efficient, it could effectively transfer about 90% of the energy from the nanocrystal to the molecule.

“We can use this chemistry to create materials that absorb and emit any color of light,” said Raulerson, who says that, with further finetuning, similar silicon nanocrystals tethered to a molecule could generate a variety of applications, from battery-less night-vision goggles to new miniature electronics.

Other highly efficient processes of this sort, called photon up-conversion, previously relied on toxic materials. As the new approach uses exclusively nontoxic materials, it opens the door for applications in human medicine, bioimaging and environmentally sustainable technologies, something that Roberts and fellow UT Austin chemist Michael Rose are working towards.

“The novelty is really how to get the two parts of this structure–the organic molecules and the quantum confined silicon nanocrystals–to work together,” said Mangolini, an associate professor of mechanical engineering. “We are the first group to really put the two together.”

The paper’s other authors include Devin Coleman and Carter Gerke of UC Riverside.

Funding for the research was provided by the National Science Foundation, the Robert A. Welch Foundation, the Research Corporation for Science Advancement, the Air Force Office of Scientific Research and the Department of Energy. Additionally, Raulerson holds the Leon O. Morgan Graduate Fellowship at UT Austin.

Water reuse could be key for future of hydraulic fracturing

A social bacterium with versatile habits