Until now, studies on the APOL1 gene have primarily focused on African and African American populations 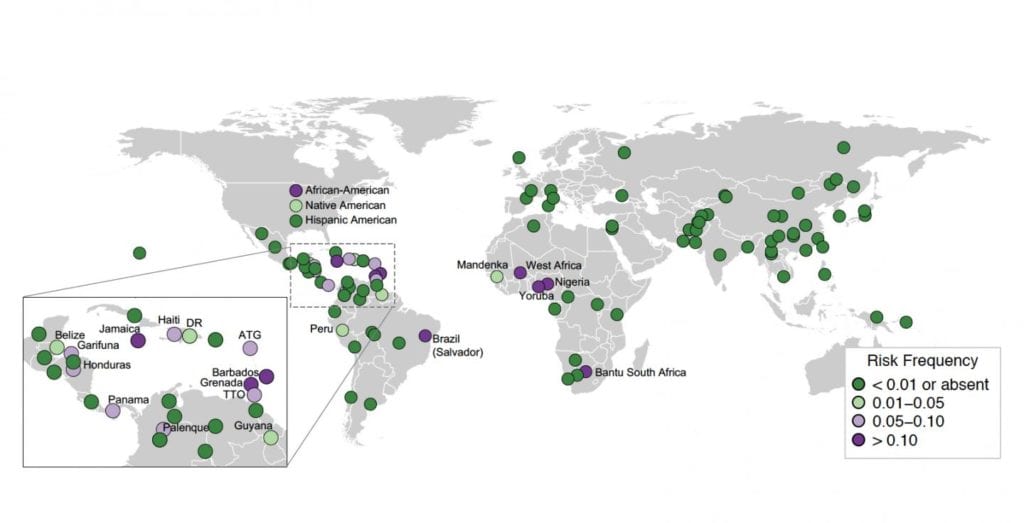 New York, NY (December 27, 2018) — In the largest population genomics investigation to date, a team of researchers at the Icahn School of Medicine at Mount Sinai, Stanford University, and the University of Colorado have discovered that kidney disease risk variants of the gene APOL1, previously known to affect African and African American populations, are also found at appreciable frequencies in Caribbean and Latin American populations. Because these populations are historically under-studied and under-tested in connection with APOL1, the gene’s impact on these populations is currently unknown. The findings were described in a publication released today in The New England Journal of Medicine.

Risk variants in the APOL1 gene were first discovered in African Americans. Consequently, much of the research studies and clinical trials that followed have been heavily focused on self-reported African or African American populations. Knowing this, researchers in the study decided to link genetic and demographic data spanning more than 110 populations, leading to the discovery of APOL1 risk variants in other populations who share ancestry from Africa, such as those who are Hispanic or Latino.

“This finding is crucial in early detection of at-risk individuals who may not be indicated for genetic screening due to self-reporting of ethnic origins, but may still be at high risk due to the presence of APOL1 risk variants,” said Girish Nadkarni, MD, Assistant Professor of Medicine (Nephrology) at the Icahn School of Medicine and first author of the study. “It is important to more fully understand the global distribution of these variants based on country of origin and genetic ancestry rather than self-reported race/ethnic group.”

Knowing that the APOL1 risk is present in these populations could help physicians tailor treatment more closely to their needs, an example of the approach known as precision medicine. The team’s data also provides a centralized resource to help the medical community better understand at-risk kidney disease populations worldwide.

“APOL1 is the poster child for precision medicine, as the risk variants have a large impact on lifetime risk for not only kidney disease, but also early onset hypertension and cardiovascular disease,” said Eimear Kenny, PhD, Associate Professor of Genetics and Genomic Sciences at the Icahn School of Medicine at Mount Sinai, Director of the Center for Genomic Health, and senior author of the publication. “Here at Mount Sinai, we are leading national efforts to learn about the impact of APOL1 risk variants in routine clinical settings, and the gene is currently under intense scrutiny as a therapeutic target and across diverse populations.”

The Mount Sinai Health System is New York City’s largest integrated delivery system encompassing (with the addition of South Nassau Communities Hospital) eight hospital campuses, a leading medical school, and a vast network of ambulatory practices throughout the greater New York region. Mount Sinai’s vision is to produce the safest care, the highest quality, the highest satisfaction, the best access and the best value of any health system in the nation. The Health System includes approximately 7,480 primary and specialty care physicians; 11 joint-venture ambulatory surgery centers; more than 410 ambulatory practices throughout the five boroughs of New York City, Westchester, Long Island, and Florida; and 31 affiliated community health centers. The Icahn School of Medicine is one of three medical schools that have earned distinction by multiple indicators: ranked in the top 20 by U.S. News & World Report’s “Best Medical Schools”, aligned with a U.S. News & World Report’s “Honor Roll” Hospital, No. 12 in the nation for National Institutes of Health funding, and among the top 10 most innovative research institutions as ranked by the journal Nature in its Nature Innovation Index. This reflects a special level of excellence in education, clinical practice, and research. The Mount Sinai Hospital is ranked No. 18 on U.S. News & World Report’s “Honor Roll” of top U.S. hospitals; it is one of the nation’s top 20 hospitals in Cardiology/Heart Surgery, Gastroenterology/GI Surgery, Geriatrics, Nephrology, and Neurology/Neurosurgery, and in the top 50 in six other specialties in the 2018-2019 “Best Hospitals” issue. Mount Sinai’s Kravis Children’s Hospital also is ranked nationally in five out of ten pediatric specialties by U.S. News & World Report. The New York Eye and Ear Infirmary of Mount Sinai is ranked 11th nationally for Ophthalmology and 44th for Ear, Nose, and Throat. Mount Sinai Beth Israel, Mount Sinai St. Luke’s, Mount Sinai West, and South Nassau Communities Hospital are ranked regionally.

Researchers investigate a billion years of coexistence between plants…