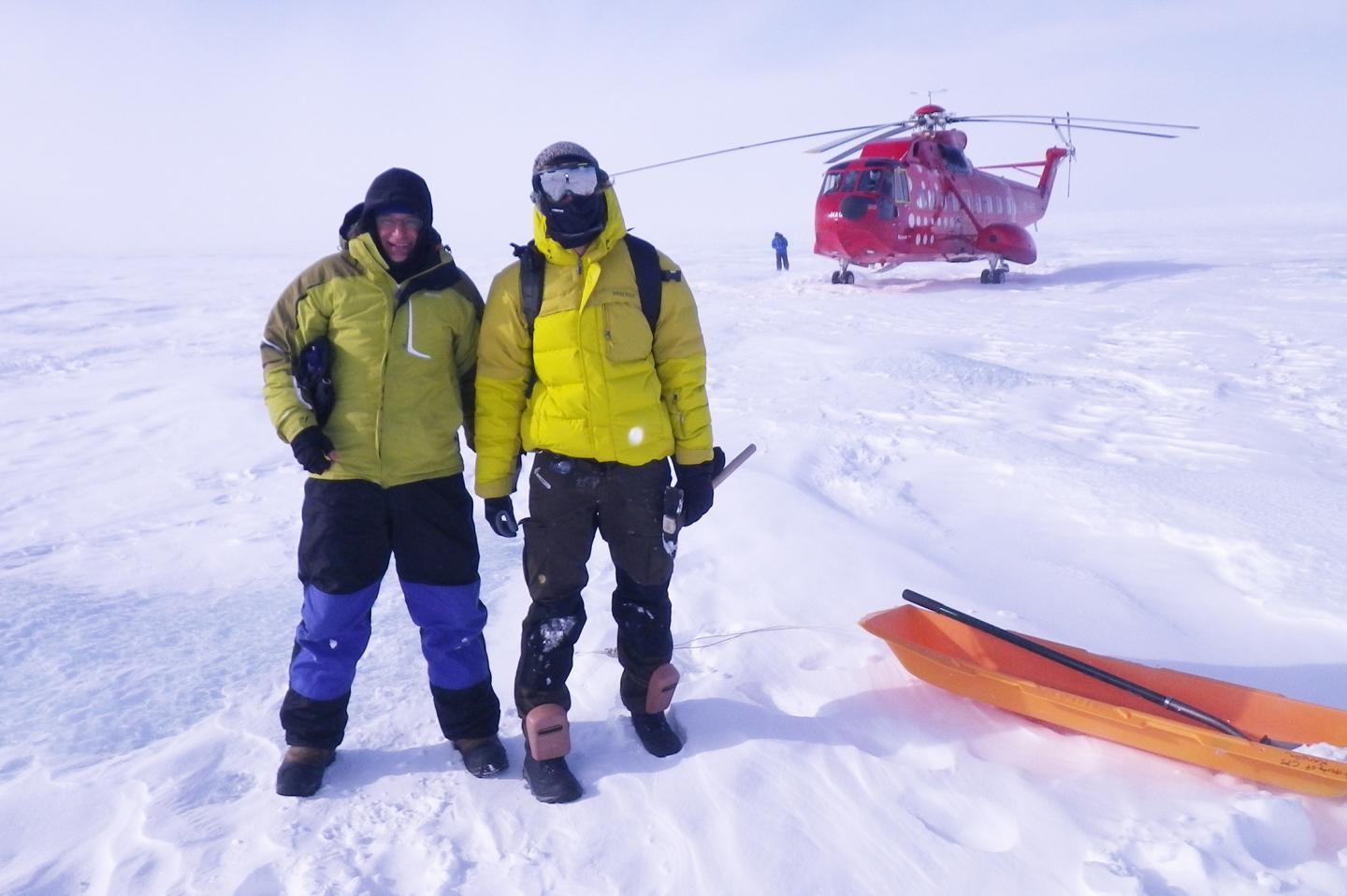 Ice on the Greenland Ice Sheet doesn’t just melt. The ice actually slides rapidly across its bed toward the ice sheet’s edges. As a result, because ice motion is from sliding as opposed to ice deformation, ice is being moved to the high-melt marginal zones more rapidly than previously thought.

Neil Humphrey, a University of Wyoming professor of geology and geophysics, and Nathan Maier, a UW geology Ph.D. student from Morristown, N.J., headed a recent research group that discovered that you do not need beds with till or mud, which acts as a lubricant, to have high rates of sliding. Rather, they discovered that it is over hard bedrock where ice slides more rapidly. Additionally, the ice slides over the bedrock much more than previous theories predicted of how ice on the Greenland Ice Sheet moves.

“That’s the kicker. The Greenland Ice Sheet is happily sliding over a surface that theory says it shouldn’t be able to rapidly slide over,” Humphrey says. “What’s important is that, because of this, you get a lot of ice to the oceans or low altitudes where it can melt really fast. It’s like a lump of molasses sliding off the continent. It just doesn’t melt. It slides toward the ocean.”

“Our measurements of sliding-dominated flow over a hard bed in a slow-moving region were quite surprising because people don’t typically associate these regions with high sliding,” Maier adds. “Generally, people associate lots of sliding motion with regions that have soft beds (mud) or exceptionally high-sliding velocities, such as ice streams. Yet, in this relatively boring region, we found the highest fraction of sliding measured to date.”

Other contributors to the paper were Joel Harper, an associate professor of geosciences, and Toby Meierbachtol, an assistant professor, both from the University of Montana. The paper represents work conducted on the Greenland Ice Sheet from 2014-16.

The researchers installed 212 tilt sensors within a network of boreholes drilled into the ice bed. The tilt sensors allow for observation of ice deformation and sliding movement. Humphrey uses a large drill he designed, which he describes as “a very large truck washer” that puts out high-pressure steam with a large drill nozzle and hydraulic hose. He says it is “the fastest ice drill in the world” and can drill 5,000 feet into the Greenland Ice Sheet in eight hours.

“Most of our work is truly arcane,” Humphrey says. “We’re boring holes through the ice sheet, but we don’t even collect ice cores.”

Modeling constrained by detailed tilt observations made along the basal interface of the ice suggests that the high sliding is due to a slippery bed, where sparsely spaced bedrock bumps provide limited resistance to sliding. Estimates of sliding speed are typically based on the residual between observed surface velocity and modeled ice deformational velocity.

“We don’t have a good theory for this type of sliding,” Humphrey explains. “But the data from this paper will allow us to work on an improved theory.”

Maier agrees, saying their work should help improve the accuracy of ice sheet models as they try to predict future mass loss from Greenland.

“There has been some debate as to whether ice flow along the edges of Greenland should be considered mostly deformation or mostly sliding,” Maier says. “This has to do with uncertainty of trying to calculate deformation motion using surface measurements alone. Our direct measurements of sliding- dominated motion, along with sliding measurements made by other research teams in Greenland, make a pretty compelling argument that no matter where you go along the edges of Greenland, you are likely to have a lot of sliding.”

Maier says this is important to the future of Greenland because it means the ice sheet can move mass around efficiently and, thus, respond rapidly to a changing climate.

Similarly, Maier says changes in ice motion due to a warming climate also will result in thickening and thinning along the edges of the ice sheet. Because ice can be moved around efficiently due to high rates of sliding, changes in melting can occur rapidly.

The sliding ice does two things, Humphrey says. First, it allows the ice to slide into the ocean and make icebergs, which then float away. Two, the ice slides into lower, warmer climate, where it can melt faster.

While it may sound dire, Humphrey notes the entire Greenland Ice Sheet is 5,000 to 10,000 feet thick.

“In a really big melt year, the ice sheet might melt a few feet. It means Greenland is going to be there another 10,000 years,” Humphrey says. “So, it’s not the catastrophe the media is overhyping.”

Humphrey has been working in Greenland for the past 30 years and says the Greenland Ice Sheet has only melted 10 feet during that time span.

Salamanders chew with their palate