Millions of years ago, giant dwarf crocodiles roamed a part of Africa with a taste for our human ancestors. 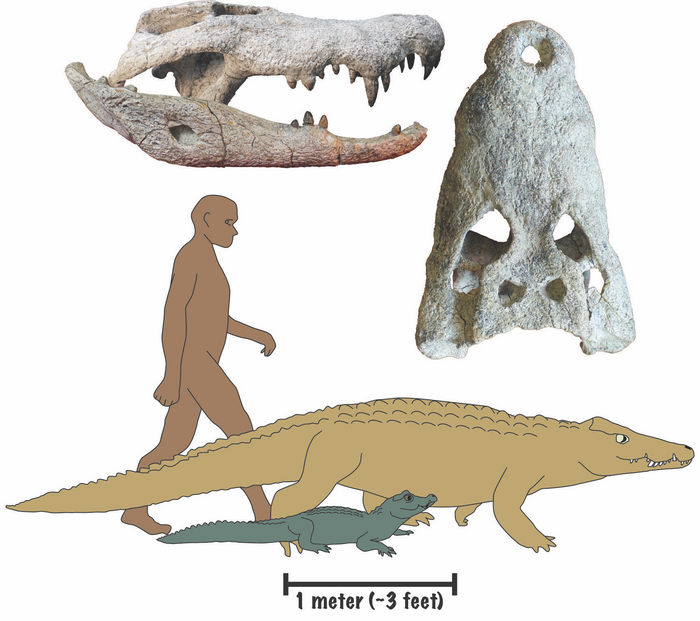 Millions of years ago, giant dwarf crocodiles roamed a part of Africa with a taste for our human ancestors.

In a new study, researchers led by the University of Iowa announced the discovery of two new species of crocodiles that roamed east Africa between 18 million and 15 million years ago before mysteriously disappearing. The species, called giant dwarf crocodiles, are related to dwarf crocodiles currently found in central and west Africa.

But the giant dwarf crocodiles were a lot bigger—hence, the name—than their modern relatives. Dwarf crocodiles rarely exceed 4 or 5 feet in length, but the ancient forms measured as long as 12 feet and likely were among the fiercest threats to any animal they encountered.

“These were the biggest predators our ancestors faced,” says Christopher Brochu, professor in the Department of Earth and Environmental Sciences at Iowa and the study’s corresponding author. “They were opportunistic predators, just as crocodiles are today. It would have been downright perilous for ancient humans to head down to the river for a drink.”

The new species are called Kinyang mabokoensis and Kinyang tchernovi. They had short, deep snouts and large, conical teeth. Their nostrils opened somewhat up and to the front, not straight upward as they do in modern crocodiles. They spent most of their time in the forest, rather than in the water, waiting to ambush prey.

“They had what looked like this big grin that made them look really happy, but they would bite your face off if you gave them the chance,” Brochu says.

Kinyang lived in the East Africa Rift Valley, in parts of present-day Kenya, in the early to middle Miocene period—a time when the region was largely blanketed by forests. Yet, beginning with the end of a period called the Miocene Climatic Optimum about 15 million years ago, both species appeared to die out.

Why did they vanish? Brochu thinks climate change led to less rainfall in the region. The reduction in rainfall led to a gradual retreat of forests, which yielded to grasslands and mixed savanna woodlands. The change in landscape affected Kinyang, which the researchers think probably preferred wooded regions for hunting and nesting.

“Modern dwarf crocodiles are found exclusively in forested wetlands,” says Brochu, who has studied ancient and modern crocodiles for more than three decades. “Loss of habitat may have prompted a major change in the crocodiles found in the area.

“These same environmental changes have been linked to the rise of the larger bipedal primates that gave rise to modern humans,” Brochu adds.

Brochu acknowledges what caused the Kinyang to die out requires further testing, as the researchers are unable to determine precisely when the animals became extinct. Also, there is a gap in the fossil record between KInyang and other crocodile lineages that came on to the scene beginning about 7 million years ago. The new arrivals included relatives of the Nile crocodile currently found in Kenya.

Brochu examined the specimens during several visits since 2007 to the National Museums of Kenya, in Nairobi.

The study is titled, “Giant Dwarf Crocodiles From the Miocene of Kenya and Crocodylid Faunal Dynamics in the Late Cenozoic of East Africa.” It was published online June 8 in the journal Anatomical Record.