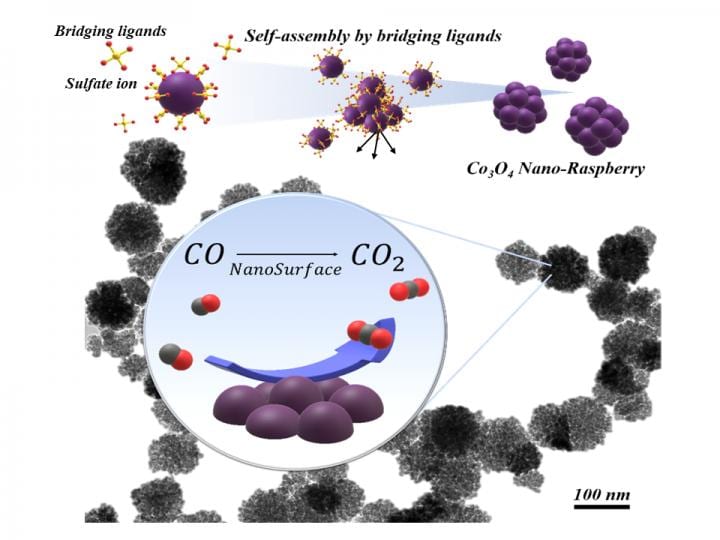 Scientists from the Nagoya Institute of Technology (NITech) in Japan have developed a sustainable method to neutralize carbon monoxide, the odorless poison produced by cars and home boilers. Their results were featured on the cover of the September issue of the journal, Nanomaterials.

Traditionally, carbon monoxide needs a noble metal – a rare and expensive ingredient – to convert into carbon dioxide and readily dissipate into the atmosphere. Although the noble metal ensures structural stability at a variety of temperatures, it’s a cost-prohibitive and finite resource and researchers have been anxious to find an alternative.

Now, a team led by Dr. Teruaki Fuchigami at the NITech has developed a raspberry-shaped nanoparticle capable of the same oxidation process that makes carbon monoxide gain an extra oxygen atom and lose its most potent toxicity.

“We found that the raspberry-shaped particles achieve both high structural stability and high reactivity even in a single nanoscale surface structure,” said Dr. Fuchigami, an assistant professor in the Department of Life Science and Applied Chemistry at the NITech and first author on the paper.

The key, according to Dr. Fuchigami, is ensuring the particles are highly complex but organized. A single, simple particle can oxidize carbon monoxide, but it will naturally join with other simple particles. Those simple particles compact together and lose their oxidation abilities, especially as temperatures rise in an engine or boiler.

Catalytic nanoparticles with single nano-scale and complex three-dimensional (3D) structures can achieve both high structural stability and high catalytic activity, however, such nanoparticles are difficult to produce using conventional methods. Dr. Fuchigami and his team worked to control not only the size of the particles, but also how they assembled together. They used cobalt oxide nanoparticles, a noble metal alternative that can oxidize well but eventually presses together and becomes inactive.

The researchers applied sulfate ions to formation process of the cobalt oxide particle. The sulfate ions grasp the particles, creating a chemically bonded bridge. Called a ligand, this bridge holds the nanoparticles together while also inhibiting the clumping growth that would lead to a loss of catalytic activity.

The resulting particle looked like a raspberry: small cells bound together into something greater than the sum of its parts.

“The phenomenon of crosslinking two substances has been formulated in the field of metal-organic framework research, but, as far as we can tell, this is the first report in oxide nanoparticles. The effects of bridging ligands on the formation of oxide nanoparticles, which will be helpful to establish a synthesis theory for complex 3D nanostructures,” Dr. Fuchigami said of the raspberry-shaped nanostructure.

The unique surface nanostructure of the raspberry-shaped particles remained stable even under the harsh catalytic reaction process, improving the low-temperature CO oxidation activity.

Dr. Fuchigami and his team will continue to study the bridging ligands with the goal of precisely controlling the design aspect of nanomaterials, such as the size and morphology.

Ultimately, they plan to discover the most stable and active configuration for chemical catalysis and other applications.

Discovery of pancreatic neuroendocrine subtypes could help predict likelihood of…