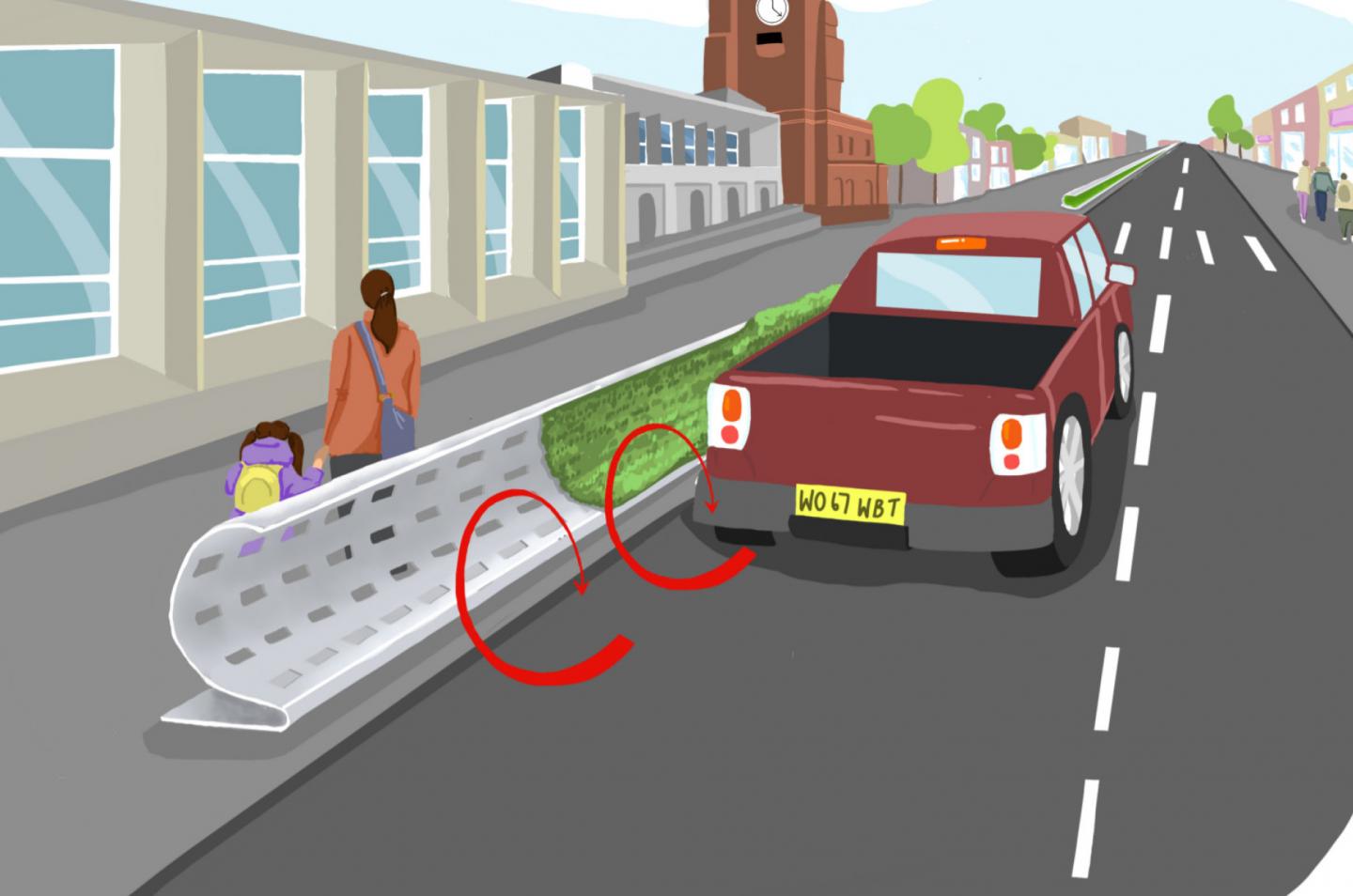 A unique curved barrier has been designed by researchers at Imperial College London, who publish new findings in the peer-reviewed journal Cities & Health on how the structure can protect people from the damaging effects of air pollution.

The health concerns arising from lower air quality are more significant amongst lower income communities which are more likely to be situated near heavily traffic-laden thoroughfares. Similarly, children are both more vulnerable to and more readily exposed to air pollution simply due to their proximity to the ground, where heavier pollutants settle over time. Real-time data on air pollution in London and south east England can be found on London Air, a tool run by the London Air Quality Network at Imperial.

Dr Tilly Collins found this issue particularly worrying, especially after noticing the severe pollution in the air while watching her child playing netball in a school playground alongside a busy London A-road.

“I thought to myself, what could be done? And done now? So, I started researching the effect of walls along roads,” Dr Collins, from Imperial’s Centre for Environmental Policy, said. “It became evident that along the pedestrian side of these roadside walls, there are vortices where the air quality can actually be even worse as the pollutants get trapped in them.”

Initially building off simple models, Dr Collins, Dr Huw Woodward, also from the Centre for Environmental Policy, and Agamemnon Otero of Energy Garden, explored ideas of urban design that would mitigate these vortex effects and improve air quality for pedestrians and especially children.

The curved barriers deflect pollution away from pedestrians and back onto the road.

Inspired by airfield baffles and the curved sound-walls alongside motorways in Germany and the Netherlands, the researchers found that curved structures would more effectively disperse and reflect pollutants back towards the roads and would very rapidly improve air quality for pedestrians in an inexpensive manner.

Although there are challenges in implementing this sort of urban furniture, such as road visibility, the researchers are confident that the net gain in air quality and health is immediate and significant enough to warrant further exploration of these ideas. Beyond air quality, these curved barriers would also mitigate noise pollution, and would be able to act as scaffolds to increase green infrastructure throughout large cities.

When asked about the challenges faced during this research project, Dr Collins said: “Initially, it was difficult to convince others to get on board. The focus is very much on successfully reducing exhaust fumes, but there are these things we can do now to protect our children. The different sciences, urban designers and architects should collaborate more to design these solutions achieve air quality improvements at local scales more effectively and quickly.”

Despite the hurdles, Dr Collins is optimistic for the future of the project. With increased attention being placed on the challenges associated with air pollution, there is a need for unique and effective urban design, and these curved baffling barriers are able to tackle these challenges head on, providing immense benefits to the general public.