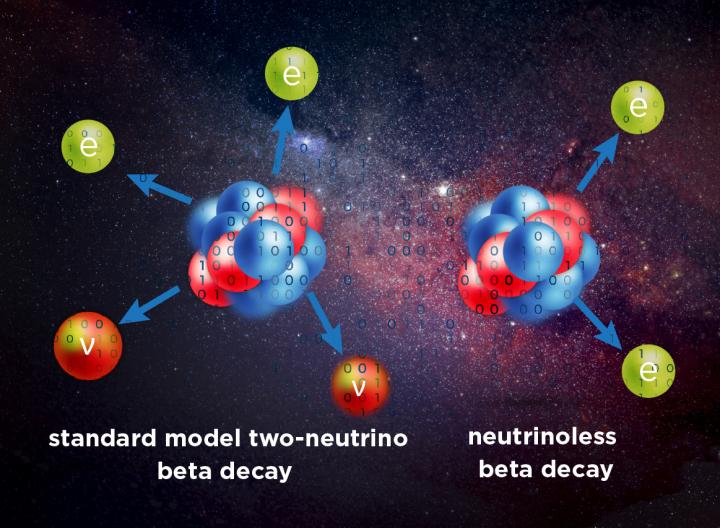 EAST LANSING, Mich. – Researchers from the Facility for Rare Isotope Beams (FRIB) Laboratory (frib.msu.edu) at Michigan State University (MSU) have taken a major step toward a theoretical first-principles description of neutrinoless double-beta decay. Observing this yet-unconfirmed rare nuclear process would have important implications for particle physics and cosmology. Theoretical simulations are essential to planning and evaluating proposed experiments. The research team presented their results in an article recently published in Physical Review Letters.

FRIB theorists Jiangming Yao, research associate and the lead author of the study, Roland Wirth, research associate, and Heiko Hergert, assistant professor, are members of a topical collaboration on fundamental symmetries and neutrinoless double-beta decay. The U.S. Department of Energy Office of Science Office of Nuclear Physics is funding the topical collaboration. The theorists joined forces with fellow topical collaboration members from the University of North Carolina-Chapel Hill and external collaborators from the Universidad Autonoma de Madrid, Spain. Their work marks an important milestone toward a theoretical calculation of neutrinoless double-beta decay rates with fully controlled and quantified uncertainties.

The authors developed the In-Medium Generator-Coordinate Method (IM-GCM). It is a novel approach for modeling the interactions between nucleons that is capable of describing the complex structure of the candidate nuclei for this decay. The first application of IM-GCM to the computation of the neutrinoless double beta decay rate for the nucleus of calcium-48 sets the stage for explorations of the other candidates with controllable theoretical uncertainty.

In neutrinoless double-beta decay, two protons simultaneously transform into neutrons without emitting the two neutrinos that appear in more typical weak-interaction processes. If it exists, this is an extremely rare decay that is expected to have a half-life greater than 10 septillion years (a 1 with 25 zeroes), which means that half of a sample of nuclei would have undergone neutrinoless double beta-decay in this extremely long period.

“The absence of neutrinos in this yet-unconfirmed decay makes it possible to determine the neutrino masses,” said Hergert. “These masses are an important parameter in models of the evolution of the universe. The theoretical decay rate is a key ingredient in the extraction of the neutrino masses from the measured lifetime, or at least provides new upper limits on these quantities.”

Theoretical calculations like those presented by the authors will also help determine the size of the detectors needed for large-scale neutrinoless double-beta decay experiments.

Developing and implementing tests of fundamental symmetries is an important element of FRIB’s mission. FRIB experiments explore the structure of neutrinoless double beta decay candidates and their neighboring isotopes, which affects the rate at which the decay might occur. The theoretical methods developed for this study can now be applied to other nuclei with complex structures that are studied at FRIB.

MSU is establishing the Facility for Rare Isotope Beams (FRIB) as a new user facility for the Office of Nuclear Physics in the U.S. Department of Energy Office of Science. Under construction on campus and operated by MSU, FRIB will enable scientists to make discoveries about the properties of rare isotopes in order to better understand the physics of nuclei, nuclear astrophysics, fundamental interactions, and applications for society, including in medicine, homeland security, and industry.

The U.S. Department of Energy Office of Science is the single largest supporter of basic research in the physical sciences in the United States and is working to address some of today’s most pressing challenges. For more information, visit energy.gov/science.