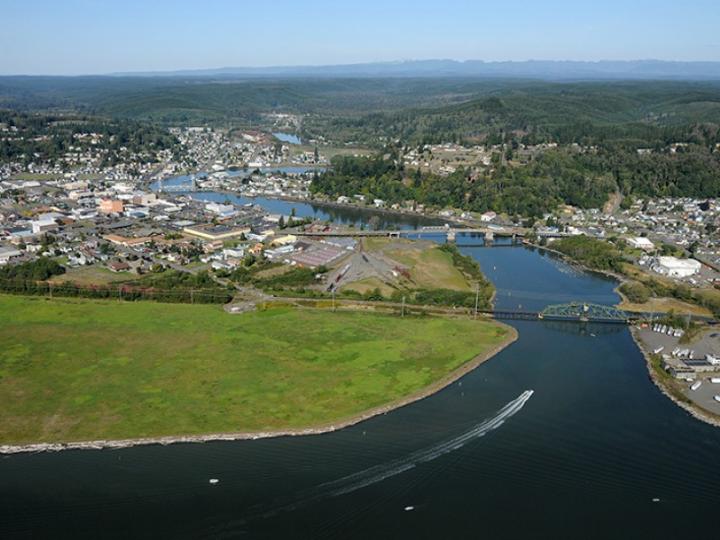 CORVALLIS, Ore. – Researchers at Oregon State University have developed a new methodology for building computer models that paves the way to better understanding the flood risks faced by coastal communities.

That’s important because towns along the coast are often situated near estuaries, which makes them vulnerable to both storm tide inundation and river flooding.

Estuaries occur where rivers flow into the ocean, meaning the rivers are influenced by tidal flooding and also experience frequent, periodic changes in salinity, sunlight and oxygen.

The study site for this research was Washington state’s Grays Harbor, but the methodology can be applied to any area subject to estuarine flooding.

“Flooding in areas like the Pacific Northwest is complicated since many processes contribute, such as tides, large waves and river flow,” said Kai Parker, corresponding author of the study published in Coastal Engineering. “We need to be able to predict water levels on several time scales.”

In the short term – i.e., flooding from a particular storm – predictions can inform decisions about actions like evacuations and road closures. And it’s also critical to understand how flooding occurs across longer time scales – for example, so planners can have more information when deciding whether or not to develop a low-lying parcel of land.

The new computer model involves “emulation” and uses statistical techniques, as opposed to traditional models that try to directly reproduce the wide collection of physical processes at play when estuaries flood.

That direct reproduction, Parker noted requires a lot of time and processing power.

“The computational expense makes it difficult to study flooding at long time scales,” he said. “The key question we wanted to answer in this study is, ‘is there a better way to handle long simulation times for computationally expensive flooding models?'”

The research was part of Parker’s Ph.D. program at OSU under professors David Hill of the College of and Engineering and Peter Ruggiero of the College of Earth, Ocean and Atmospheric Sciences. Also among the collaborators was Katy Serafin, an Oregon State alumnus soon to be on the faculty at the University of Florida.

“We reduced the complexity of the model by using statistical methods,” said Parker, now a Fulbright scholar at Universidad Técnica Federico Santa Maria in Chile. “Once the statistical model, or emulator, is built – once we create a training dataset and train the emulator – additional use of it comes at essentially zero cost. It’s nearly instantaneous.”

Grays Harbor covers 235 square kilometers, is fed by five rivers that drain a watershed of greater than 7,000 square kilometers and is “subject to an energetic storm and wave climate,” Parker said, providing a solid test for the model.

“Our model is very useful since we can use it to explore an infinite variety of future flooding scenarios,” Parker said. “This allows us to better understand the risk of flooding in coastal communities as well as how this risk will change moving into the future.”

The National Oceanic and Atmospheric Administration supported this research, as did the Quinault Treaty Area tribal governments.

Genes that first enabled plants to grow leaves identified by…

A simple, yet versatile, new design for chaotic oscillating circuitry…