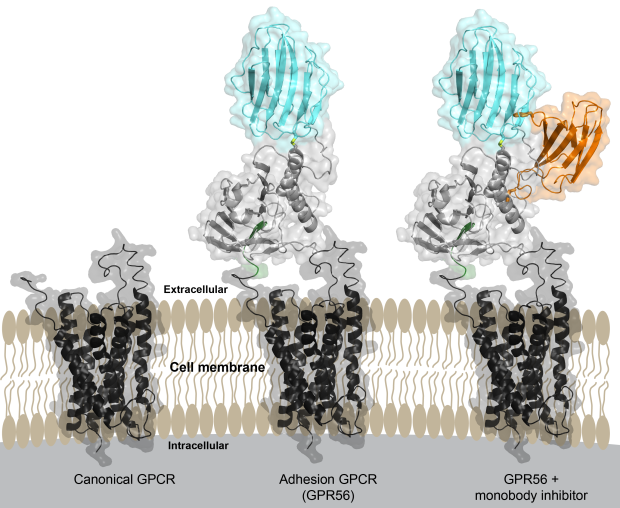 Researchers from the University of Chicago have described the three-dimensional, atomic structure of an important cell receptor molecule linked to the development of several diseases, including melanoma, acute myeloid leukemia and bilateral frontoparietal polymicrogyria, a debilitating developmental brain disorder. The study, published Sept. 21, in Neuron, also describes an engineered protein molecule that turns off the receptor. The report lays the groundwork for future development of pharmaceutical treatments that target the diseases mediated by these proteins, called adhesion G protein-coupled receptors, or aGPCRs.

“Given the complicated biology mediated by aGPCRs, particularly in neurodevelopment, we believe our work will pave the way for future studies investigating the molecular details of these important processes, bringing us closer to the ultimate goal of combatting diseases influenced by aGPCRs,” said Gabriel Salzman, an MD/PhD student in the Biophysical Sciences Graduate Program at the University of Chicago.

Gabriel Salzman, an MD/PhD student in the Biophysical Sciences Graduate Program at UChicago

Over the past several years, research groups around the world have discovered a wide array of biological roles played by aGPCRs, many of which are closely linked to human diseases. Members of this group of receptors are closely related to more-widely studied, conventional GPCRs. These aGPCRs are characterized by the presence of a large segment that sticks out into the extracellular space, however, a structural foundation for understanding the function of these extracellular regions has been lacking. Meanwhile, researchers did not know if these regions could be targeted for therapeutic intervention, a critical step toward future pharmaceutical development.

Salzman has focused his PhD thesis on the study of the extracellular regions of aGPCRs, which are thought to molecularly bridge the functions of cell-to-cell adhesion and intracellular signaling. The focus of this current study is the aGPCR known as GPR56 or ADGRG1, which has established biological roles in muscle cell development, several cancers and neurodevelopment. Specifically, GPR56 plays roles in the development of two important cell types in the brain: neurons that make up the outer layer of the brain, known as the cortex, and cells responsible for providing electrical insulation to neurons throughout the brain, known as oligodendrocytes.

To carry out this project, Salzman collaborated with two laboratory teams at UChicago: Demet Araç, PhD, assistant professor of biochemistry and molecular biology, who studies the structure and function of aGPCRs, and Shohei Koide, former professor of biochemistry and molecular biophysics, now at New York University Langone Medical Center, who specializes in engineering synthetic monobody molecules that work like highly-tailored antibodies but are much simpler. Working jointly in the Koide and Araç labs, Salzman and his colleagues engineered a monobody that binds to the extracellular region of GPR56 and causes intracellular signaling to decrease, establishing that it is possible to change the function of aGPCRs, for example, by targeting their extracellular regions with pharmaceuticals.

Furthermore, they determined the structure of the entire extracellular region of GPR56 at an atomic level, the first such structural description of any aGPCR. In doing so, the researchers identified a unique protein domain called PLL, which, if deleted, corresponds to a naturally occurring variant of GPR56. Salzman and his team went on to show that deleting the PLL domain led to increased signaling, further supporting the key concept that extracellular regions govern cell signaling.

Bioinformatics analysis also identified a particular position in the PLL domain that is highly conserved across species, often a telltale sign of biological importance. Indeed, when this position is mutated, it destroys the ability for GPR56 to mediate the development of oligodendrocytes. This further underscores the key neurobiological role of this newly identified domain in GPR56.

Understanding the biological roles played by aGPCR extracellular regions will give researchers more tools to develop treatments for diseases influenced by these proteins. For example, recent studies have shown that the treatment cocktail for a particular type of leukemia may significantly benefit from a future GPR56 inhibitor, perhaps using a monobody similar to that created by Salzman’s team for this study.

“The University of Chicago Biophysical Sciences PhD program challenges students to have dual mentors. The power of combining protein engineering, structure determination, cell signaling analysis and organismal neurobiology is exemplified by our work, which could not have been done without this uniquely empowering educational system,” Salzman said. “Our discovery that aGPCR extracellular regions regulate function in a multifaceted and complex manner provides important guidelines for developing therapeutics for diverse diseases in which aGPCRs play important roles.”

The study, “Structural Basis for Regulation of GPR56/ADGRG1 by Its Alternatively Spliced Extracellular Domains,” was supported by the National Institutes of Health, the National Cancer Institute, the National Institute of General Medical Sciences, the Brain Research Foundation and the Big Ideas Generator. Additional authors include Sarah Ackerman, Katherine Leon and Celia Fernandez from the University of Chicago; Chen Deng from Yale University; Akiko Koide from NYU Langone Medical Center; Rong Luo and Xianhua Piao from Harvard Medical School; Hannah Stoveken and Gregory Tall from the University of Rochester; and Kelly Monk from Washington University.