Researchers demonstrate how biomolecule mixtures communicate, interact and adapt to their environment

NEW YORK, April 12, 2022 — A post-doctoral researcher with the Advanced Science Research Center at the CUNY Graduate Center (CUNY ASRC) has made an important step toward understanding how complex mixtures of biomolecular building blocks form self-organized patterns. 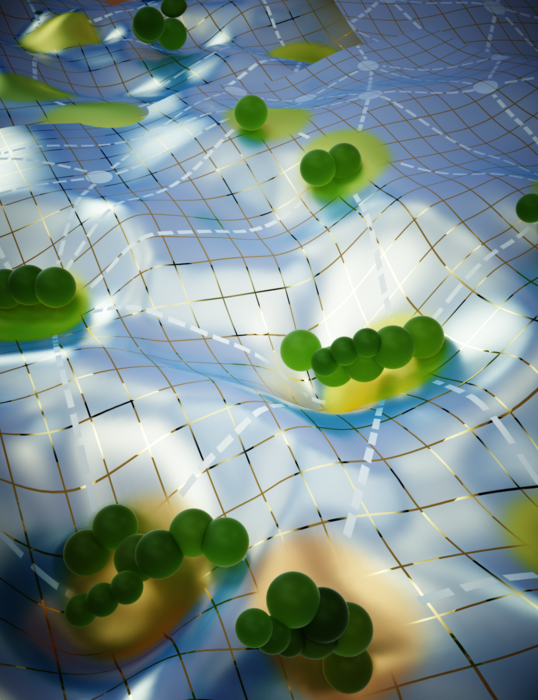 NEW YORK, April 12, 2022 — A post-doctoral researcher with the Advanced Science Research Center at the CUNY Graduate Center (CUNY ASRC) has made an important step toward understanding how complex mixtures of biomolecular building blocks form self-organized patterns.

The discovery—detailed in a new paper published in the journal Chem and authored by Ankit Jain, a member of CUNY ASRC Nanoscience Initiative Director Rein Ulijn’s lab—provides new knowledge about adaptive biological functions, which could be critical in designing novel materials and technologies with similar abilities and attributes.

“All life forms start with the same conserved sets of building blocks, which includes the 20 amino acids that make up proteins,” said Jain. “Figuring out how mixtures of these molecules communicate, interact and form self-organizing patterns would enhance our understanding of how biology creates functionality. This understanding could also give rise to completely new ways of creating materials and technologies that incorporate life processes such as adapting, growing, healing and developing new properties when required.”

Jain took a new, synthetic, approach to begin uncovering how complex biomolecule mixtures interact and collectively adapt to changes in their environment. Instead of trying to disentangle molecular organization in existing systems, such as those found in biological cells, he addressed the problem in a test tube by creating mixtures with components designed to react and interact. Jain then tracked and observed the emergence of increasingly complex patterns that the biomolecules spontaneously formed in response to changes in their environment.

“Complex mixtures of interacting molecules are fundamental to life processes, but they are not commonly studied in chemistry labs, because they are messy, very complicated and difficult to study and understand,” said Ulijn. “Systematically designing mixtures and tracking their behavior allows us to make fundamental observations about how mixtures of molecules become functional collectives. We were able to detail how these chemical systems absorb changes in external conditions to form specific patterns of build-up and breakdown. We also discovered that systems with so many variables show a stochastic behavior, so while overall pattern formation looks similar when running multiple experiments, the precise details in two independent experiments are different.”

Jain’s experiment began with mixing a number of selected dipeptides, which are minimalistic protein-like compounds composed of two amino acids. These sets of dipeptides (designed based on their ability to aggregate and interact) also contained a catalyst that enabled the dipeptides to dynamically recombine and form peptides with more complex interaction patterns. The most complex system studied in this paper began with 15 different dipeptides, which reversibly combine to form 225 unique tetrapeptides.  It was then possible for Jain to track the formation and breakdown of peptides of different sequence within the mixtures. He observed that their patterns of interaction were strongly dictated by environmental conditions.

Illuminating molecular self-organization through hierarchical patterns of both covalent and non-covalent interactions is key to understanding how biological functions relevant to life emerge. The new bottom-up approach enables researchers to understand, for the first time, ensemble characteristics while simultaneously providing molecular resolution of the information. The work demonstrates that mixtures of simple molecules demonstrate spontaneous sequence selection, which may provide insights into the chemical origins of biological function. Overall, the design of adaptive systems based on multi-component mixtures is likely to lead to discovery of how patterns dictate the formation of reconfigurable, functional materials that hold promise for future bioinspired technologies.

About the Advanced Science Research Center

The CUNY Graduate Center is a leader in public graduate education devoted to enhancing the public good through pioneering research, serious learning, and reasoned debate. The Graduate Center offers ambitious students nearly 50 doctoral and master’s programs of the highest caliber, taught by top faculty from throughout CUNY — the nation’s largest urban public university. Through its nearly 40 centers, institutes, initiatives, and the Advanced Science Research Center, the Graduate Center influences public policy and discourse and shapes innovation. The Graduate Center’s extensive public programs make it a home for culture and conversation.