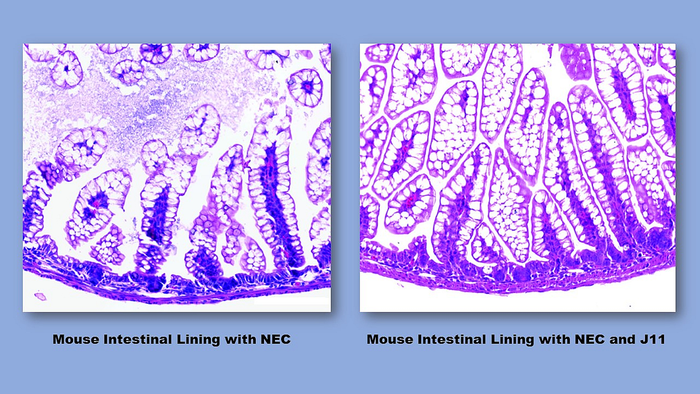 In a study with mice reported today in the journal Science Translational Medicine, a Johns Hopkins Medicine research team has provided what may be the most definitive view to date of the biological process leading to necrotizing enterocolitis (NEC), a dangerous inflammatory disease that can destroy a premature infant’s intestinal lining and causes death in up to a third of the cases. The researchers showed that the loss of enteric glia — cells that support specialized nerves in the intestine — leads to intestinal dysmotility — a condition in which the gastrointestinal tract loses its ability to move food and other materials along (known as peristalsis) — and that this malfunction is a key factor in the genesis of NEC.

“Symptoms seen in premature infants, such as a distended abdomen and intolerances to foods — the things that result from intestinal dysmotility — have traditionally been considered consequences of NEC,” says study senior author David Hackam, M.D., Ph.D., surgeon-in-chief at Johns Hopkins Children’s Center and professor of surgery at the Johns Hopkins University School of Medicine. “Our findings suggest, perhaps for the first time, that these conditions may actually be a cause, rather than just a result, of NEC.”

Hackam and his colleagues say it seems logical that the enteric nervous system and the glial cells supporting its function play such a pivotal role in NEC’s genesis. “This system has been called ‘the body’s second brain’ because of its importance to overall health,” he says.

In their study, the researchers also found that overproduction of a protein called toll-like receptor 4 (TLR4) — shown in previous Johns Hopkins Medicine studies to be involved in NEC’s onset — triggers the enteric glia loss. In separate experiments, they demonstrated that inhibiting TLR4 and ensuring enteric glia survival enables the cells to produce a growth factor called brain-dependent neurotrophic factor (BDNF), which in turn curtails the wayward immune response leading to NEC.

“This finding enabled us to test in mice the use of a compound that could ‘kick-start’ the intestine by preserving enteric glia and their ability to produce BDNF, resulting in restored intestinal movement — and most importantly, the prevention of NEC,” says study lead author Mark Kovler, M.D., a general surgery resident at the Johns Hopkins University School of Medicine.

Seen in as many as 12% of newborn babies born before 37 weeks gestation, NEC is a rapidly progressing gastrointestinal emergency in which normally harmless gut bacteria invade the underdeveloped wall of the premature infant’s colon, causing inflammation that can ultimately destroy healthy tissue at the site. If enough cells become necrotic (die) so that a hole is created in the intestinal wall, harmful bacteria can enter the bloodstream and cause life-threatening sepsis.

In earlier mouse studies, the Johns Hopkins Medicine researchers showed that NEC results when the underdeveloped intestinal lining in premature infants produces higher-than-normal amounts of TLR4. TLR4 in full-term babies binds with bacteria in the gut and helps keep threatening microbes in check. However, in premature infants, TLR4 can act like an immune system switch, with excess amounts of the protein mistakenly directing the body’s disease defense mechanism against the intestinal wall instead.

“Knowing this, we designed our current study to see if TLR4 was involved in the loss of enteric glia, and if so, how that might pave the way for NEC to develop,” says Kovler.

As a result of their experiments, the researchers were able to provide five lines of evidence that intestinal dysmotility — as a consequence of TLR4-influenced loss of enteric glia — is a critical factor in the development of NEC:

The researchers also studied NEC-damaged intestinal tissues taken from wild-type mice, piglets and human infants (whose tissues had been removed during surgery to treat NEC), finding in all cases that enteric glia were depleted.

“Because we have shown that enteric glia protect animal intestines from the devastating effects of NEC, it is reasonable to assume a similar scenario exists in humans,” says Hackam. “And if we can one day repair the system when it’s broken and prevent NEC in premature infants — through the use of enteric glia therapies such as J11 — then that will be one less obstacle for these tiny patients to overcome.”