ANN ARBOR, Michigan — It’s a good news, bad news story. Patients whose brain tumors have a mutated enzyme called IDH1 typically live longer than those without the mutation. But even as these tumors are initially less aggressive, they always come back. A key reason: The tumors are resistant to radiation treatment and are invasive. 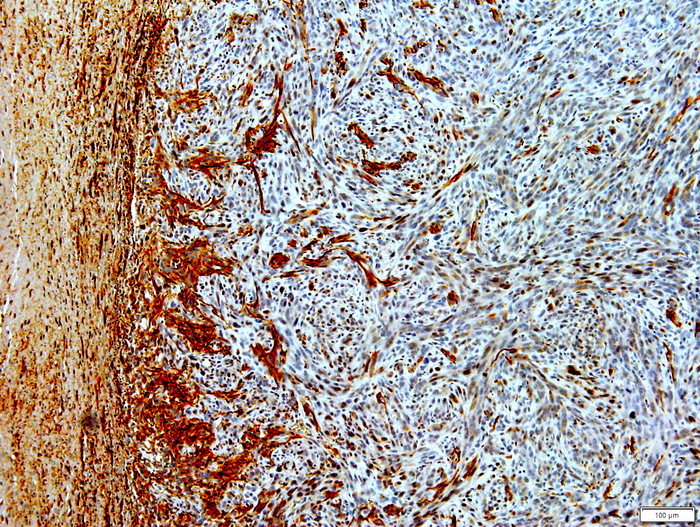 ANN ARBOR, Michigan — It’s a good news, bad news story. Patients whose brain tumors have a mutated enzyme called IDH1 typically live longer than those without the mutation. But even as these tumors are initially less aggressive, they always come back. A key reason: The tumors are resistant to radiation treatment and are invasive.

In a new study, researchers at the University of Michigan Rogel Cancer Center uncovered a gene that is overexpressed in mutated IDH1. Studies in human cells and a novel mouse model both show that this gene, called ZMYND8, plays a critical role in the radiation resistance. When they knocked down the gene, the glioma cells became responsive to radiation treatment.

“These tumors almost always recur, and when they do, the tumors are much more aggressive. This finding gives us a new therapeutic avenue to treat these patients. It’s a very promising and novel therapeutic target,” said Maria G. Castro, Ph.D., R.C. Schneider Collegiate Professor of Neurosurgery at Michigan Medicine. Castro is senior author on the study, published in Clinical Cancer Research, a journal of the American Association for Cancer Research.

The researchers used two cell cultures obtained from surgical biopsies of patients with mutated IDH1 glioma. Cells were treated with an inhibitor designed to block a metabolite produced by the mutated IDH1. From there, they screened the RNA and found a gene called ZMYND8.

“After treating with the mIDH1 inhibitor, we found this gene, ZMYND8, was significantly downregulated. It’s overexpressed in mutant IDH1 glioma cells, but when you treat the cells with an inhibitor, ZMYND8 protein expression goes down. And when this gene goes down, the cells become radiosensitive,” said study first author Stephen V. Carney, a Cancer Biology graduate student in the Castro/Lowenstein Lab.

ZMYND8 is known to be a regulator of DNA damage response. Radiation therapy works by damaging DNA. When ZMYND8 protein expression is high, researchers saw radiation resistance. When ZMYND8 was knocked out, the radiation led to DNA damage and increased glioma cell death.

The researchers also developed a new mouse model of mutated IDH1 glioma, which confirmed that knocking out ZMYND8 sensitized the tumors to radiation therapy, leading to increased survival.

“ZMYND8 contributes to the survival of mutant IDH1 glioma in response to radiation. Our study shows that we now have a new way of treating these tumors by using mRNA-based therapeutics in which we can downregulate the expression of ZMYND8 to render the cells radiosensitive,” said study author Pedro R. Lowenstein, M.D., Ph.D., Richard C. Schneider Collegiate Professor of Neurosurgery at Michigan Medicine.

The researchers also combined ZMYND8 knockdown with other cancer drugs, such as PARP and HDAC inhibitors. They found these other drugs synergized to make the cells more responsive to radiation, suggesting potential for combination therapy for patients with mutant IDH1 glioma.

More research is needed, but Castro envisions working with colleagues at the U-M Biointerfaces Institute to design RNA-based inhibitors to target ZMYND8, which could be delivered using nanoparticles specially designed to cross the challenging blood-brain barrier. It’s a technique they’ve already tested in previous research.