WASHINGTON — Researchers have used a novel near-infrared light imaging technique to capture the first cross-sectional images of carbon dioxide in the exhaust plume of a commercial jet engine. This new state-of-the-art technology could help accelerate turbine combustion research aimed at developing engines and aviation fuels that are more environmentally friendly. 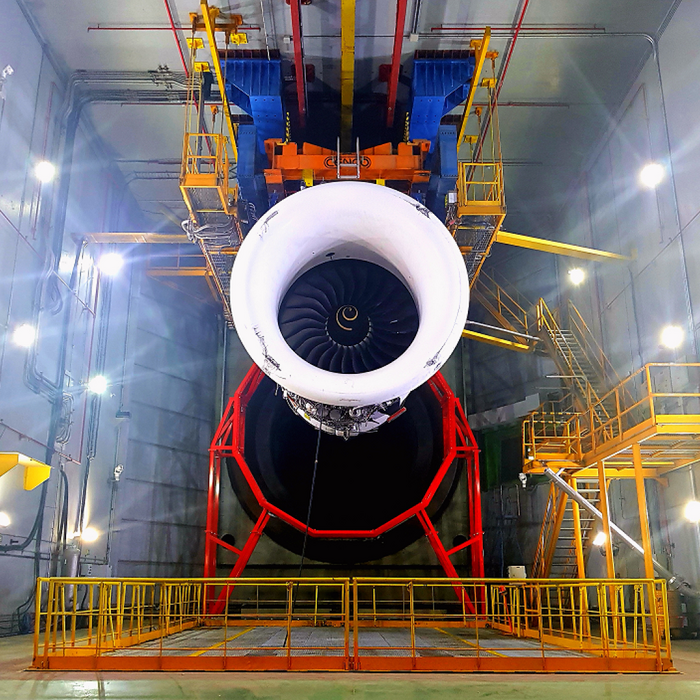 WASHINGTON — Researchers have used a novel near-infrared light imaging technique to capture the first cross-sectional images of carbon dioxide in the exhaust plume of a commercial jet engine. This new state-of-the-art technology could help accelerate turbine combustion research aimed at developing engines and aviation fuels that are more environmentally friendly.

“This approach, which we call chemical species tomography, provides real-time spatially resolved information for carbon dioxide emissions from a large-scale commercial engine,” said research team leader Michael Lengden from the University of Strathclyde in the U.K. “This information has not been available before at this industrial scale and is a big improvement over the current industry-standard emissions measurement, which involves taking gas from the exhaust to a gas analyzer system in a different location.”

The researchers report the new research in the  Optica Publishing Group journal Applied Optics. Chemical species tomography works much like the X-ray-based CT scans used in medicine, except that it uses near-infrared laser light tuned to the absorption wavelength of a target molecule and requires very fast imaging speeds to capture the dynamic processes of combustion.

“The aviation industry is a major contributor to global carbon dioxide emissions so there is a need for turbine and fuel technologies to improve radically,” said Lengden. “By providing fully validated emissions measurements, our new method could help the industry develop new technology that reduces the environmental impact of aviation.”

Until now it has been impossible to image turbine combustion on test rigs containing a large airplane engine. To solve this problem, four instrumentation research groups in the U.K. came together to combine their knowledge in gas species measurement in harsh environments, chemical species tomography and optical source development. These teams worked with industrial partners to develop technology that would be practical for industrial research and development

“The teams saw an opportunity to develop world leading instrumentation for the aerospace industry, and to understand emissions and performance improvements from large scale engines,” said Lengden. “With chemical species tomography, we can now start to ‘see’ the chemical detail of combustion in a real production airplane engine.”

After years of working to fine-tune signal to noise ratios, data acquisition methods, imaging techniques and optical sources, the researchers created the first facility capable of acquiring industrial emission measurements at the large scale of a commercial airplane engine.

To perform chemical species tomography, 126 beams of near-infrared laser light are shone through the gas from all around the side at many angles in a way that doesn’t disturb the gas flow. Adequately capturing the exhaust from a commercial airplane engine requires imaging an area up to 1.8 m in diameter. To capture this, the imaging components were mounted on a 7-m diameter frame located just 3 m from the exit nozzle of the engine. The researchers used 126 optical beams to achieve a spatial resolution of about 60 mm in the central region of the engine exhaust.

“The very refined measurement methodology we used demanded an exquisite knowledge of carbon dioxide spectroscopy and the electronics systems that provide very precise data,” said Lengden. “Also, a very sophisticated mathematical method had to be developed to compute each chemical species image from the measured absorptions of the 126 different beams we used.”

Capturing combustion on a large scale

The researchers used this large-scale setup to perform chemical species tomography of carbon dioxide produced by combustion in a modern Rolls-Royce Trent gas engine turbine. These engines are typically used on long-haul aircraft and contain a combustor with 18 fuel injectors arranged in a circle. For the tests, researchers recorded data at frame rates of 1.25 Hz and 0.3125 Hz while the engine was operated over the full range of thrust.

The resulting images showed that, at all thrust levels, a ring-structure of high carbon dioxide concentration was present in the central region of the engine. There was also a raised region in the middle of the plume, which was likely due to the engine’s shape.

The researchers are now working to adapt the new instrument to enable quantitative measurement and imaging of other chemicals produced by turbine combustion in both the aerospace and industrial power generation sectors, and to capture images of temperature. This will enable engineers and scientists developing new turbines and fuels to better understand the combustion process for current and future technologies.

Optica Publishing Group is a division of Optica (formerly OSA), Advancing Optics and Photonics Worldwide. It publishes the largest collection of peer-reviewed content in optics and photonics, including 18 prestigious journals, the society’s flagship member magazine, and papers from more than 835 conferences, including 6,500+ associated videos. With over 400,000 journal articles, conference papers and videos to search, discover and access, Optica Publishing Group represents the full range of research in the field from around the globe.