More than 112 years ago, Fritz Haber and Carl Bosch industrialized a process that could produce ammonia from nitrogen readily available in the air, creating commercially viable chemical fertilizer capable of improving crop production. Considered to be one of the most important scientific breakthroughs of the 20th century, the Haber-Bosch process is still used to grow crops around the world. It saved millions from famine, but it, along with other human activities, is disrupting the planet’s nitrogen cycle, warming the globe, and potentially risking the health of millions. 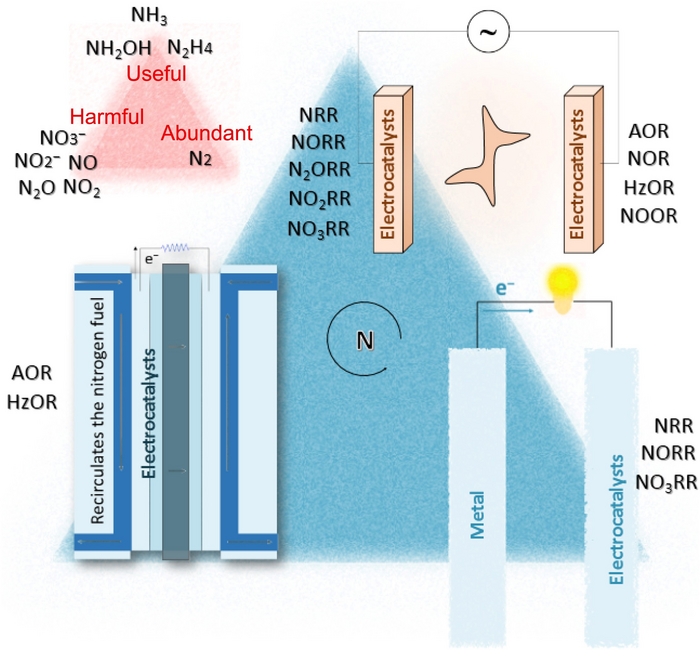 More than 112 years ago, Fritz Haber and Carl Bosch industrialized a process that could produce ammonia from nitrogen readily available in the air, creating commercially viable chemical fertilizer capable of improving crop production. Considered to be one of the most important scientific breakthroughs of the 20th century, the Haber-Bosch process is still used to grow crops around the world. It saved millions from famine, but it, along with other human activities, is disrupting the planet’s nitrogen cycle, warming the globe, and potentially risking the health of millions.

That’s why now is the time to review the scientific work underway to rebalance the nitrogen cycle, according to Xuping Sun, professor in the Institute of Fundamental and Frontier Sciences, University of Electronic Science and Technology of China. Sun and his team assessed the last years of research in the field and summarized the most promising paths forward in a paper published on June 2 in Nano Research Energy.

“The majority of Earth’s atmosphere — 78% — is atmospheric nitrogen, making it the largest source of nitrogen,” Sun said. “However, atmospheric nitrogen has limited availability for biological use, leading to a scarcity of usable nitrogen in many types of ecosystems, so it undergoes various types of transformation to maintain a balance. Humanity has tipped the Earth’s nitrogen cycle out of balance.”

Nitrogen cycles through several chemical forms as it moves among ecosystems in the atmosphere, water and land. Prior to the advent of the Haber-Bosch process, for example, plants procured ammonium from decomposing microorganisms found in compost and manure that take up nitrogen and convert it. The plants absorb the ammonium, from the microorganisms or from fertilizer, into their roots, but they cannot use the abundance provided by fertilizer.

“When plant roots do not remove the fertilizer, some of it runs off the field and pollutes waterways,” Sun said. “The rest is consumed by a series of soil microorganisms that convert ammonia to nitrite, then nitrate and, finally, to nitrogen gas. That can combine with oxygen into nitrous oxide, commonly known as laughing gas, which is about 300 times more effective at heating the atmosphere than carbon dioxide.”

The answer, Sun said, could be electrocatalysis. This process uses a catalyst to accelerate a chemical reaction on an electrode, and it is commonly used in such products as fuel cells or batteries.

“Electrocatalysis is a simple but powerful method that operates at ambient conditions, where catalytic materials determine the efficiency of the conversion,” Sun said. “The nitrogen-cycle catalysis contains several conversion reactions and corresponding potential electrocatalysts, so a genuinely effective and stable catalyst will be our best chance to balance the nitrogen cycle, especially if it is flexible, sustainable and compatible enough to convert intermittent renewable energy to value-added chemicals with minimal carbon emissions.”

The researchers specifically review how recent advances in heterogeneous nanomaterials, or tunable atomic materials whose specific size and arrangement can change the reaction, may contribute potential solutions.

“Although a plethora of catalysts have been developed, showing good efficiency and with mechanistic explanations, major breakthroughs are still badly needed,” Sun said. “We hope that this paper will bring more researchers’ attention to the problems in this field that need to be solved, including accurate quantitative methods or new indicators for determining catalyst activity; and truly efficient, stable and economical catalytic systems, which require the catalyst, electrolyte, reactor and more.”

Sun said the researchers plan to continue investigating various approaches for developing electrocatalysts that could accelerate balancing the nitrogen cycle.

The National Natural Science Foundation of China supported this work.

Nano Research Energy is launched by Tsinghua University Press, aiming at being an international, open-access and interdisciplinary journal. We will publish research on cutting-edge advanced nanomaterials and nanotechnology for energy. It is dedicated to exploring various aspects of energy-related research that utilizes nanomaterials and nanotechnology, including but not limited to energy generation, conversion, storage, conservation, clean energy, etc. Nano Research Energy will publish four types of manuscripts, that is, Communications, Research Articles, Reviews, and Perspectives in an open-access form.