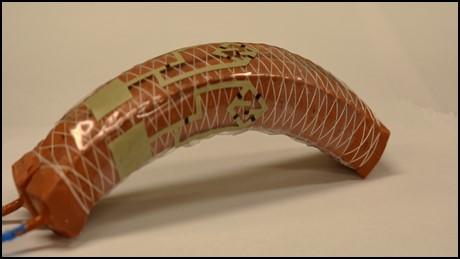 In work that combines a deep understanding of the biology of soft-bodied animals such as earthworms with advances in materials and electronic technologies, researchers from the United States and China have developed a robotic device containing a stretchable transistor that allows neurological function.

Cunjiang Yu, Bill D. Cook Associate Professor of Mechanical Engineering at the University of Houston, said the work represents a significant step toward the development of prosthetics that could directly connect with the peripheral nerves in biological tissues, offering neurological function to artificial limbs, as well as toward advances in soft neurorobots capable of thinking and making judgments. Yu is corresponding author for a paper describing the work, published in Science Advances.

He is also a principal investigator with the Texas Center for Superconductivity at the University of Houston.

“When human skin is touched, you feel it,” Yu said to describe the human capabilities the new device can mimic. “The feeling originates in your brain, through neural pathways from your skin to the brain.”

The findings have implications for neuroprosthetics, as well as for neuromorphic computing, an emerging technology with the potential to allow high volume information processing using small amounts of energy through devices that mimic the electric behavior of neural networks.

Inspired by nature, the researchers designed artificial synaptic transistors – that is, transistors that function similarly to neurons – which continue to work even after being stretched as much as 50%. While the resulting neurological function is less sophisticated than that exhibited by those of its living counterparts, they said it marks an important first step toward more powerful engineering systems in the future.

The transistor, described by researchers as having stretching characteristics similar to those in a rubber band, exhibited functions similar to those of biological synapses, including excitatory postsynaptic potential, current, facilitation, and short-term memory and long-term memory.

The soft neurorobot was equipped with a neurologically integrated tactile sensory skin, allowing it to sense the interaction with the external environment and respond accordingly. “The neurorobot senses physical tapping and locomotes adaptively in a programmed manner through synapse memory encoded signals,” the researchers wrote.

About the University of Houston

The University of Houston is a Carnegie-designated Tier One public research university recognized with a Phi Beta Kappa chapter for excellence in undergraduate education. UH serves the globally competitive Houston and Gulf Coast Region by providing world-class faculty, experiential learning and strategic industry partnerships. Located in the nation’s fourth-largest city and one of the most ethnically and culturally diverse regions in the country, UH is a federally designated Hispanic- and Asian-American-Serving institution with enrollment of more than 46,000 students.

Monkeys can also thank their body for vocal development, not only their brain

Scienmag May 1, 2019
$3.34 million grant for safe disposal as overdose deaths continue to riseCredit: University of Houston For the…

Antibiotics could be promising treatment for form of dementia