Prescriptions for multiple drugs, or polypharmacy, is often recommended for the treatment of complex diseases. However, upon ingestion, multiple drugs may interact in an undesirable manner, resulting in severe adverse effects or decreased clinical efficacy. Early detection of such drug-drug interactions (DDIs) is therefore essential to prevent patients from experiencing adverse effects. 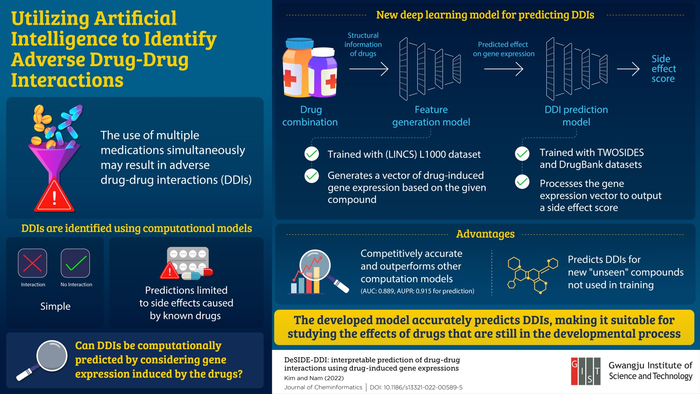 Prescriptions for multiple drugs, or polypharmacy, is often recommended for the treatment of complex diseases. However, upon ingestion, multiple drugs may interact in an undesirable manner, resulting in severe adverse effects or decreased clinical efficacy. Early detection of such drug-drug interactions (DDIs) is therefore essential to prevent patients from experiencing adverse effects.

Although understanding the mechanisms of DDIs at a molecular level is essential to predict their undesirable effects, current models rely on structures and properties of drugs, with predictive range limited to previously observed interactions. They do not consider the effect of DDIs on genes and cell functionality.

To address these limitations, Associate Professor Hojung Nam and Ph.D. candidate Eunyoung Kim from the Gwangju Institute of Science and Technology in South Korea developed a deep learning-based model to predict DDIs based on drug-induced gene expression signatures. These findings were published in the Journal of Cheminformatics on March 4, 2022.

To explain the key features of this model, Prof. Nam explains, “Our model considers the effects of drugs on genes by utilizing gene expression data, providing an explanation for why a certain pair of drugs cause DDIs. It can predict DDIs for currently approved drugs as well as for novel compounds. This way, the threats of polypharmacy can be resolved before new drugs are made available to the public.”

Discussing its real-life applications, Prof. Nam remarks, “This model can discern potentially dangerous drug pairs, acting as a drug safety monitoring system. It can help researchers define the correct usage of the drug in the drug development phase.”

A model with such potential will truly revolutionize how the safety of novel drugs is established in the future!

Affiliations: Gwangju Institute of Science and Technology, Republic of Korea

The Gwangju Institute of Science and Technology (GIST) was founded in 1993 by the Korean government as a research-oriented graduate school to help ensure Korea’s continued economic growth and prosperity by developing advanced science and technology with an emphasis on collaboration with the international community. Since that time, GIST has pioneered a highly regarded undergraduate science curriculum in 2010 that has become a model for other science universities in Korea. To learn more about GIST and its exciting opportunities for researchers and students alike, please visit: http://www.gist.ac.kr/.

Hojung Nam is an Associate Professor in the School of Electrical Engineering and Computer Science at the Gwangju Institute of Science and Technology (GIST). Her research group is developing various computational tools for drug discovery and developments. For example, her group developed a computational model to predict side effects caused by drug-drug interactions and patient drug responses as well as generative models for novel molecules. Prior to her work at GIST, she completed postdoctoral training in the Department of Bioengineering at the University of California, San Diego (UCSD). In 2009, Prof. Nam received a Ph.D. from the Department of Bio and Brain Engineering at the Korean Advanced Institute of Science and Technology (KAIST).

Eunyoung Kim is a Ph.D. candidate at GIST whose advisor is Prof. Nam. During her Ph.D. course, she has researched drug toxicity prediction modeling, including drug-induced liver toxicity and drug-drug interactions.