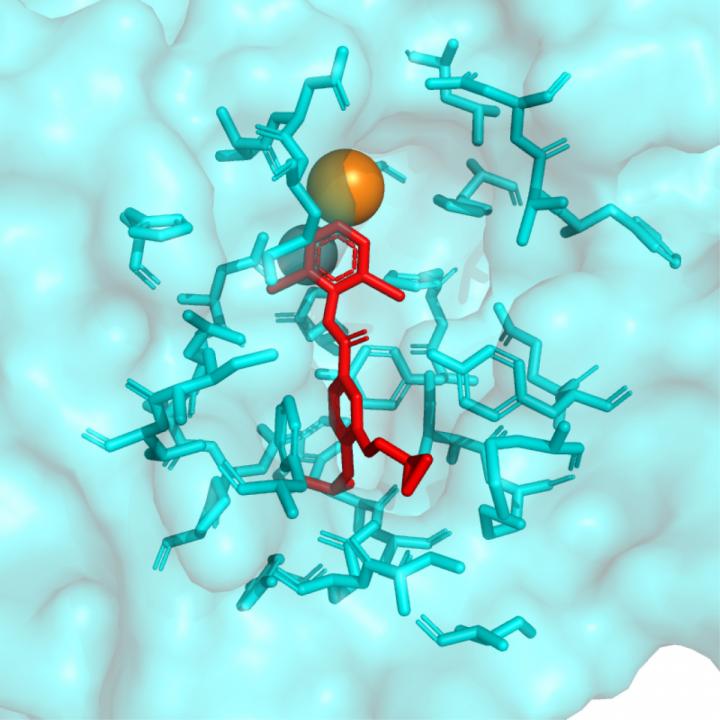 DURHAM, N.H.–Roundworms that feed on plants cause approximately $100 billion in annual global crop damage. Now researchers at the University of New Hampshire have made a patent-pending discovery that certain enzymes in roundworms, called nematodes, behave differently than the same enzymes in humans, with amino acids potentially playing a key role.

The findings, presented in the journal PLOS ONE, are important because they advance scientific efforts to develop new, more environmentally friendly pesticides to manage nematodes and reduce worldwide damage to agricultural crops such as corn, cotton, wheat, soybean, rice, and potato.

“Plant parasitic nematodes are responsible for major losses in crop production in the United States and around the world,” said Rick Cote, professor of molecular, cellular, and biomedical sciences and researcher with the New Hampshire Agricultural Experiment Station.

“Current chemical nematicides are highly toxic to humans, hence the need for ‘next-generation’ nematicides that lack adverse effects on agricultural workers and the environment. Our work identified phosphodiesterase enzymes as novel targets for development of safer, more sustainable nematicides.”

Specifically, researchers focused on phosphodiesterase enzymes (PDEs). All animals use PDEs to regulate many physiological processes, including motility, reproduction, and sensory perception. Previously, Cote and Schuster found that exposure of living nematodes to certain compounds, called PDE inhibitors, impede the action of PDEs, hampering nematode movement and its ability to sense food in its environment. The hope is that applying nematode-specific PDE inhibitors to agricultural fields could prevent plant parasitic nematodes from infecting plant roots.

This led Vashisth and Mohammadi to study, at the atomic level, which amino acids in the PDE4 enzymes are responsible for these pharmacological differences. They discovered that certain amino acids as well as differences in the overall structure of the two enzymes contribute to the reduced effectiveness of PDE inhibitors to block the nematode enzyme action. UNH has filed a patent for this discovery, which is available for licensing through UNHInnovation.

“By having shown that nematode PDEs significantly differ in their sequence and structure, we envision being able to design chemical nematicides that selectively target plant-parasitic nematodes. Nematicides targeting nematode PDEs would have the added advantage of not affecting crops, since plants lack PDEs, and being environmentally friendly to animals and humans,” Schuster said.

Researchers are expanding their study of the effects of applying PDE inhibitors to living nematodes. “We believe certain nematode PDEs may control vital physiological processes required for finding food or reproduction, and that inhibiting nematode PDEs may be lethal or cause sterility. The long-range direction for this research is to use the knowledge gained from this study to design new compounds that selectively inhibit nematode PDEs without affecting other animal PDEs,” Cote said.

The research is presented in PLOS ONE in “Pharmacological and molecular dynamics analyses of differences in inhibitor binding to human and nematode PDE4: Implications for management of parasitic nematodes” (DOI: 10.1371/journal.pone.0214554).

This material is based upon work supported by the NH Agricultural Experiment Station, through joint funding of the National Institute of Food and Agriculture, U.S. Department of Agriculture, under award number 1008769 and 1006976, and the state of New Hampshire.
Computations were performed in part on Trillian, a Cray XE6m-200 supercomputer supported by the National Science Foundation (NSF) Major Research Instrumentation program under grant PHY-1229408 and the NSF-supported (ACI-1548562) Extreme Science and Engineering Discovery Environment Comet resource at San Diego Supercomputer Center under grant TG-MCB160183.

Founded in 1887, the NH Agricultural Experiment Station at the UNH College of Life Sciences and Agriculture is UNH’s original research center and an elemental component of New Hampshire’s land-grant university heritage and mission.