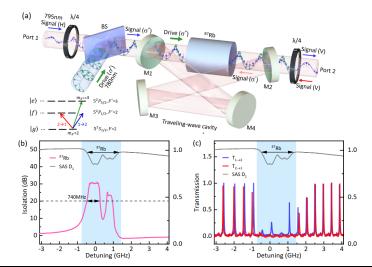 Chinese researchers achieved 51.5dB nonreciprocal isolation in the atomic ensemble, which is the highest isolation ratio in the non-magnetic nonreciprocal field. They discussed the quantum noise problem in nonreciprocal devices for the first time.

The result was published on Nature Communications on April 22, 2021.

Nonreciprocity is an important basic concept in the optical field. The isolators and circulators derived from it are all indispensable components in the optical path. Faraday isolator based on circular birefringence of magneto-optical effect is widely used because of its easy construction, high isolation and low loss.

However, in the integrated optical path, the traditional faraday isolator is subject to various limitations. On one hand, it is difficult to prepare high-performance magneto-optical media on chip. On the other hand, the required strong magnetic field will interfere with the surrounding devices. Realizing the integrated non-magnetic nonreciprocal has attracted much attention in recent years. The research team led by Academician GUO Guangcan from University of Science and Technology of China (USTC) of CAS has investigated on nonreciprocal photonic devices for several years.

In this work, Prof. ZOU Changling from the research team, cooperating with researchers from Shanxi University, has achieved an isolation ratio of 30dB first. They took use of circularly polarized pump light to polarize the atoms in the gas chamber to a specific magnetic spin state, achieving different absorptions and dispersions for different polarized lights. Based on this, they further added a traveling wave cavity which greatly enhanced the interaction between light and atoms. The isolation ratio was finally increased to 51.5dB and the nonreciprocal medium was prepared based on atomic ensemble.

The system has good robustness and is insensitive to the interference of external weak magnetic field. The fluctuation of pump frequency and power and considered has practical application value.

In addition, the team has proved that non-reciprocal devices don’t produce noisy photons in the non-reciprocal field with a confidence level of 99.7%.

This achievement has opened up a new direction in the field of non-reciprocity and is of great significance in practical application. The reviewers praised highly on this work as “The results are very impressive and seem encouraging toward realizing non reciprocal devices”.