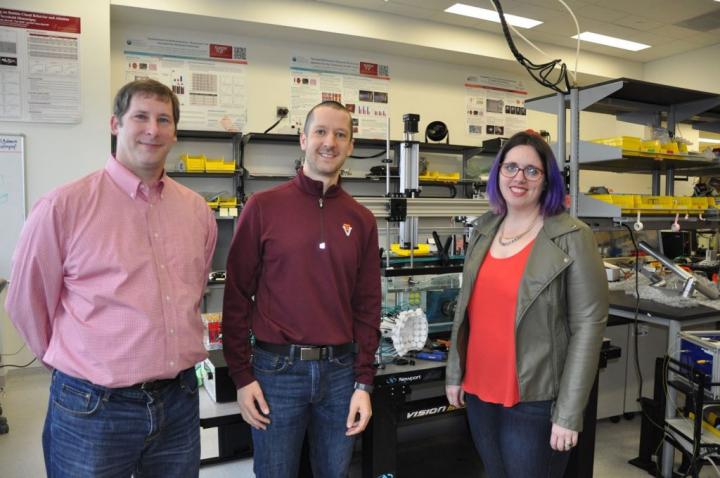 The aim of the project is to develop a novel, noninvasive method that combines nanoparticles with ultrasound to selectively target and kill cancerous cells in the breast tissue. Vlaisavljevich is leading the research, in collaboration with Jenny Munson, an associate professor of biomedical engineering and mechanics in the College of Engineering and the Fralin Biomedical Research Institute, and Irving Coy Allen, an associate professor of biomedical sciences and pathobiology at the Virginia-Maryland College of Veterinary Medicine.

According to the Centers for Disease Control and Prevention, 650,000 people receive chemotherapy in the United States each year. Chemotherapy is a drug treatment that uses chemicals to kill cells in the body. The powerful chemicals used often result in harsh side effects. The novel approach proposed in this study — nanoparticle-mediated histotripsy (NMH) — is noninvasive, which would improve the serious, harsh side effects patients experience in alternative methods, such as chemotherapy or surgery. Histotripsy is a technique that uses focused ultrasound beams to ablate — or destroy — the cancerous cells. This technique is the main focus of Vlaisavljevich’s lab, the Therapeutic Ultrasound and Noninvasive Therapies Laboratory.

“The main focus in my lab is developing histotripsy, a noninvasive tumor ablation method, which has recently been used in human patients to treat cancer,” Vlaisavljevich said. “It has shown promising results for the noninvasive treatment of solid tumors. We are excited to expand on the potential of histotripsy by using nanoparticle-mediated histotripsy to target and treat quickly-spreading tumors that couldn’t be treated with only a local ablation.”

Histotripsy is a term coined by engineers to describe the technology that uses the method of cavitation: “histo” means “tissue,” and “tripsy” means “breakdown.” The high-pressure ultrasound pulses in histotripsy create bubble clouds in the tumor, which rapidly expand and collapse, to disintegrate the targeted cells and tissue. Creation of these bubble clouds is called cavitation.

In Vlaisavljevich’s previous research on histotripsy in the context of treating cancer, the results have indicated histotripsy provides high precision and real-time imaging guidance, which translates to fewer mistakes — the cancerous cells are identified, targeted, and destroyed. This method has shown significant promise for the noninvasive treatment of tumors.

To account for this, the researchers propose to engineer acoustically-active nanocones — cone-shaped structures — that reduce the pressure required to apply histotripsy. By injecting these nanocones into the body and functionalizing such that they selectively attach to breast cancer cells, this approach will allow histotripsy to be selectively generated only in regions containing the cancerous cells. The nanocones will help target the cancer cells, destroying only the cancerous tissue.

“We have collaborated on other projects with success,” said Coy. “This is a new approach, though, and we are really optimistic about the outcomes. We are really excited to be doing this.”

After engineering the nanocones, researchers will test the in vitro feasibility of these structures for targeting and selectively ablating breast cancer cells in a tissue-engineered 3D breast cancer model developed in Munson’s lab, The Onco-Engineering Lab, before moving on to small animal studies in partnership with Allen’s lab, The Allen Laboratory.

“We use 3D tissue engineering to try to replicate an in vivo microenvironment, or the patient’s microenvironment,” Munson said. “What’s important in these models — and why we need the 3D — is to see how fluid moves through cells and tissues. With these models, we’re able to mimic that fluid flow and see what is likely to occur in the body.”

Graduate and undergraduate students will also be participating in this multidisciplinary project, gaining hands-on knowledge through conduction of vitro and in vivo tests in breast cancer models. These models will demonstrate the fluid flow, selective binding, and ablation of cancer cells.

It is expected that the project will answer the key questions needed to demonstrate the feasibility of using nanoparticle-mediated histotripsy for the treatment of metastatic breast cancer, providing a key first step toward the development of this method for use in clinics, and ultimately as a cancer treatment. The researchers also expect that this method will work for patients who aren’t candidates for surgical removal of cancerous tumors.

“If successful, my hope is that this work will lay the foundation for a new cancer therapy for patients with both early and late stage disease,” Vlaisavljevich said. “This method could be capable of significantly improving the standard of care for cancer patients by increasing our targeting specificity and treating tumors too small to detect by imaging. While our initial work is focusing on using nanoparticle-mediated histotripsy for the treatment of breast cancer, our long-term goal is to develop this as a platform technology that can treat other aggressive cancers such as metastatic brain and pancreatic cancers as well.”

View a short profile video of the Vlaisavljevich Lab here and of the Munson Lab here.