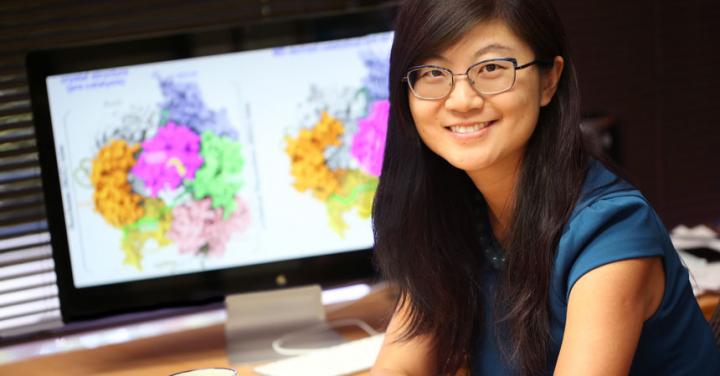 The mere mention of gene editing and DNA altering might conjure up images of designer babies, but that is not what researcher Jin Liu has in mind.

She wants help to find a cure for life-threatening diseases by making the gene-editing device CRISPR-Cas9 safer and more precise.

“Any genetic disease, the CRISPR-Cas9 technology has the potential to cure,” Dr. Liu said. “Cancer, eye diseases and sickle cell anemia for example.”

The CRISPR-Cas9 system allows researchers to make changes in a cell’s genetic code. The Cas9 enzyme is used to cut the DNA. But there is a problem standing in the way of successfully finding the cut position and altering the gene, said Dr. Liu, Assistant Professor of Pharmaceutical Sciences.

“When something is wrong with the DNA we can cut it out and repair it,” she said “But to bring the technology to the therapeutic field we have to be able to cut the DNA as accurately as possible.”

Finding a way to cut into the DNA with specificity is one of the goals that Dr. Liu wants to achieve with the help of a $437,864 National Institute of Health/National Heart Lung and Blood Institute grant.

When DNA is in the wrong place, it is called “off-target effects.”

Using computer models to simulate how Cas9 enzyme interacts with DNA, Dr. Liu is working to better understand the mechanisms behind the off target effects.

“If we can figure that out, then we can understand the modifications that need to be made to eliminate undesirable results,” she said. “We can design a new enzyme that cuts DNA precisely.”

The next step is to test the approach in the lab to see if it performs as well as expected. Eye diseases will probably be the first model tested, Dr. Liu said. The technology could one day be used to cure lymphoma, HIV and sickle cell disease.

“There’s a lot of potential with this technology,” she said, “Many diseases could be cured.”

How to tie microscopic knots