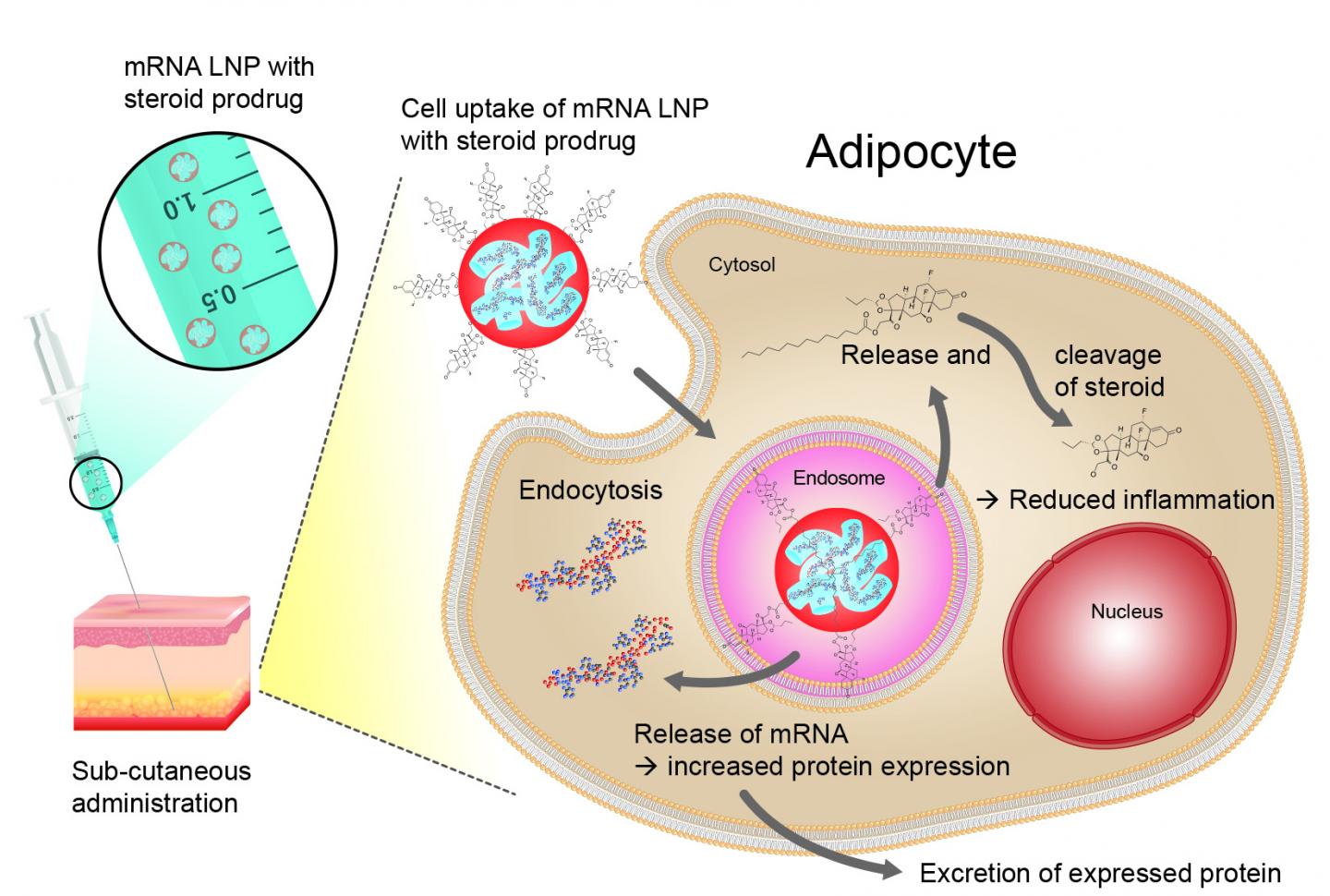 If not before, then certainly since the first messenger RNA (mRNA) vaccines to combat the SARS CoV2 virus were approved in Germany, mRNA has become a recognized term even outside scientific circles. What is less well known is that mRNA can be used to produce much more than just vaccines. Around 50 different procedures for the treatment of diseases including cancer are already being studied in clinical trials. Scientists from the pharmaceutical company AstraZeneca, with the support of neutron researchers from Forschungszentrum Jülich, have now discovered how the subcutaneous administration of mRNA can be improved. The goal is for chronically ill patients to be able to self-administer the medication on a regular basis.

mRNA serves as a blueprint in our cells for the production of protein molecules. mRNA drugs could therefore create proteins directly in the patient’s body, targeted at the site where they are needed. Besides cancer, many other diseases are potentially treatable: haemophilia, for example, where the formation of a clotting factor is disrupted, can be treated by administering the blueprint for this very factor. After heart attacks or strokes, injecting mRNA could enable the formation of proteins that allow new blood vessels to grow.

Compared to current therapeutics, producing mRNA is faster and more flexible, as mRNA can be easily manufactured and the process is independent of the mRNA sequence. In addition, the technology enables personalized drugs to be developed quickly and proteins can be produced in the body over an extended period of time and with modifications otherwise difficult to achieve.

mRNA is rapidly degraded in the body by ubiquitous enzymes. It is important to prevent this from happening before the mRNA reaches the cells where the protein synthesis takes place. In addition, it must be ensured that the messenger reaches the right cells and in sufficient quantities. Even though there are procedures in which the “naked” mRNA is administered, using secure packaging and some kind of “address label” is far more efficient.

An advanced packaging system is exemplified in so-called lipid nanoparticles (LNP), tiny vesicles made of a mixture of fat-like substances. Each of them fulfils a specific task, such as stabilising the construct or delivering it into the cell.

When administered intravenously or intramuscularly, the LNPs already fulfil their objectives sufficiently, but when administered subcutaneously, the LNP trigger significant inflammation. Subcutaneous application would be essential to enable patients to inject themselves with the drug, just as diabetes patients do with insulin. Particularly in chronic diseases that require regular doses of a drug, this would offer a great advantage.

So far, only small, insufficient quantities can be safely injected subcutaneously. Current studies from researchers at AstraZeneca and the Jülich Centre for Neutron Science (JCNS) show how this problem can be solved. The scientists supplemented the mRNA packaging with precursors of anti-inflammatory substances from the class of steroids. The body’s own enzymes can convert these precursors into effective steroids at the site of injection.

Steroids have a strong anti-inflammatory effect, but can however have considerable side effects, especially if taken regularly. These side effects can be minimised by incorporating a steroid-precursor within the LNP so it is delivered and activated only at the site where it is needed i.e. the site where the LNPs are injected.

However, it is important to ensure that the steroid precursors are accessible to the enzymes. Therefore, they must be localised in the exterior of the lipid nanoparticles.

The researchers tried to ensure this by adding shorter or longer “fat-loving” extensions to the active substances. The idea is that the fat-loving areas would be inserted between the fatty substances of the LNP envelope in such a way that the steroid precursors would end up positioned on the outside. The scientists were able to prove that this is indeed the case with the help of neutron scattering studies at the small-angle scattering instrument KWS-2, operated by the JCNS at its outstation in the Heinz Maier-Leibnitz Zentrum in Garching.

“The KWS-2 instrument allows us to study fine structures, right down to nanostructures, using the contrast variation method,” explains JCNS instrument scientist Dr. Aurel Radulescu. “In this process, the hydrogen atoms of individual components are exchanged for heavy hydrogen. This does not change the physical chemistry of the sample, but it does change the visibility for the neutrons. The neutrons can differentiate between the two isotopes and thus recognise which hydrogen atoms belong to which molecule.” In this way, the different components of the lipid nanoparticles can be selectively labelled and differentiated from each other. And sure enough, the researchers found the steroid precursors on the outside of the particles, at least in the longer extensions.

“Understanding what the LNP surface looks like is fundamental to other challenges affecting LNP development,” adds Dr. Marianna Yanez Arteta, Associate Principal Scientist in Advanced Drug Delivery at AstraZeneca. “Neutron scattering combined with selective isotope contrast is, to my knowledge, the only available technique that allows us to probe the lipid distribution and resolve the surface.”

Further studies in AstraZeneca’s laboratory confirmed the anti-inflammatory effect of the new LNP variants. The scientists also studied what length the fat-loving stem should be to ensure an optimal balance between efficient mRNA delivery and inflammatory response. “Incorporating an anti-inflammatory component into LNP greatly simplifies the therapy and may open it up to other treatments,” predicts Dr. Yanez Arteta. If the anti-inflammatory LNPs now also prove their worth when used in humans, they could indeed unlock new therapeutic options for a wide range of diseases.