The work, which was conducted over a 15-year period (2005-2019) through a partnership between scientists from the UPV/EHU and the Centre d’Ecologie Fonctionnelle et Évolutive in Montpellier (CEFE-CNRS), focused on two populations of blue tits in the south of France, one located on the outskirts of Montpellier and the other in the northwest of the island of Corsica. 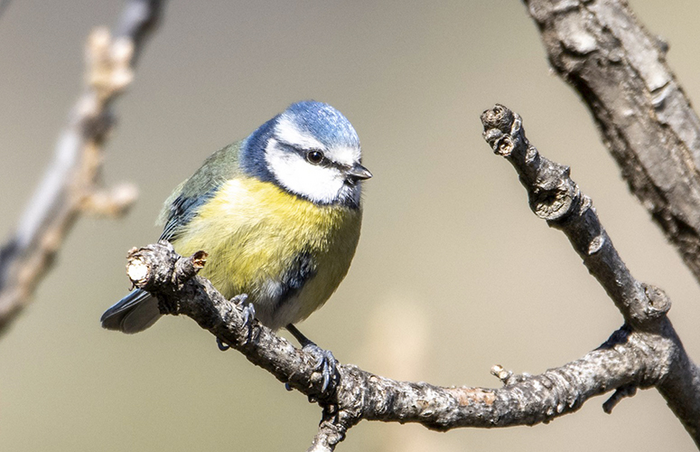 The work, which was conducted over a 15-year period (2005-2019) through a partnership between scientists from the UPV/EHU and the Centre d’Ecologie Fonctionnelle et Évolutive in Montpellier (CEFE-CNRS), focused on two populations of blue tits in the south of France, one located on the outskirts of Montpellier and the other in the northwest of the island of Corsica.

Each year between 2005 and 2019, all breeding blue tits in each population were captured. As a result, researchers from the two institutions were able to gather more than 5,800 observations on the colouring and other characteristics of the blue tits.

The blue tit is characterised by its striking colouring: a blue crest and a yellow breast. The results obtained in the study show a decrease in both populations of blue and yellow colouration between 2005 and 2019. In other words, the blue crests and yellow breasts of blue tits in these two populations are on average less colourful right now than when the research began.

“Our work suggests that environmental changes, and specifically climate change, could be the main reason why birds such as the blue tit are undergoing a change in their physical features, more specifically in the brightness and intensity of their colouration,” said David López-Idiáquez, researcher in the UPV/EHU’s Department of Plant Biology and Ecology.

“A negative trend in terms of brightness and intensity of plumage colouration in both sexes and populations has been observed, although in Corsica this change is more associated with climate,” explained López.” The change in plumage colour seems to be the result of a combination of a rise in temperature (1.23ºC) and a fall in rainfall (0.64 mm), so climate change would be the potential cause of this difference,” he said.

It may appear to be a purely aesthetic change, but just the opposite is true, as this change in plumage may have an effect on the “mating patterns” of the species. “In these birds, traits such as colouring function as signals to indicate to other individuals the quality of the specimen, which are decisive, for example, when it comes to breeding,” explained David López.

“This study was possible thanks to the continuous monitoring of the two blue tit populations for more than 15 years, which highlights the importance of long-term studies to understand the effects of climate change on the ecosystems around us,” he said.

When there is a variation in the territory, animal populations have 4 options: the first is to undergo genetic change; the second is to undergo plastic change (change in physical characteristics without genetic changes); the third is to migrate; and the last, to disappear. “It is important to stress that this change is not genetic but plastic, one of the ways of adapting to new environmental conditions,” he pointed out.

Change in our environment

“Given that our environment is quite similar, albeit less hot, our birds may be undergoing the same change,” surmised David. “In any case, there are only four studies of this type in the world, and none of them has been carried out in the Basque Country; I think it would be very interesting to carry out more research like this not only on a Basque level, but also on a national level,” he added.

David López-Idiáquez (Villajoyosa, 1988) is a postdoctoral researcher at the University of the Basque Country and at the Centre d’Ecologie Fonctionnelle et Évolutive in Montpellier. His research interests focus on understanding how the heterogeneity of environmental conditions alters evolutionary dynamics, especially in ornamental traits. After graduating from the UPV/EHU, he was awarded a PhD in Ecology from the Autonomous University of Madrid in conjunction with the Museum of Natural Sciences in Madrid.

Long-Term Decrease in Coloration: A Consequence of Climate Change?