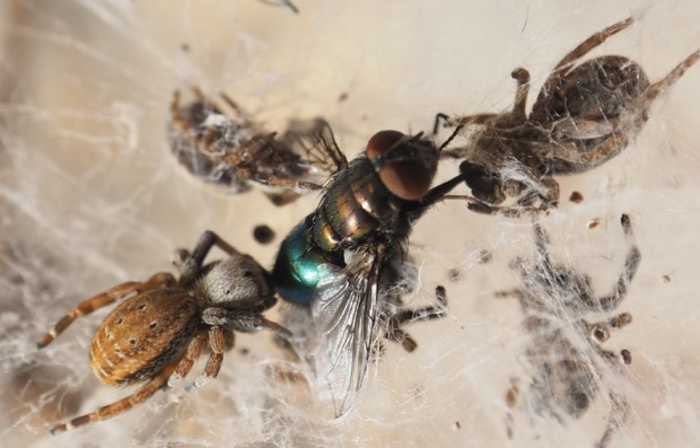 Spiders are normally solitary creatures but a few species have evolved to be social and live in groups, known as colonies.

While these spiders have evolved socially similar behaviours – living in large family groups that share both communal nests and childcare duties – the findings suggest environmental conditions may have shaped how species developed different strategies of cooperating in hunting.

An international team of researchers, led by the University of Portsmouth, explored the different responses to prey stuck in the webs among three social species of velvet spiders and found substantial differences between them.

Study lead author Dr Lena Grinsted, Senior Lecturer in Zoology in the School of Biological Sciences at the University of Portsmouth, said: “When spiders become social, they all end up becoming extremely inbred, they start caring for each other’s babies, and they hunt and feed together. What’s new in this study is that, despite these general similarities, we found there is not just one way of being a social spider. Environmental conditions and competition will have shaped different hunting strategies in different species.”

The researchers investigated the number of spiders that engaged in attacking prey, the time it took for the first spiders to attack, and the size of the prey (the study used grasshoppers, locusts and crickets).

In the African social velvet spider and African Social Spider, who live in the same locations, these species show cautious and choosy group hunting approaches, while the Indian cooperative spider has a more opportunistic approach.

Dr Grinsted added: “This indicates that where two different social species share the same habitat, they have evolved their own niches in response to competition between them.”

The study, which is published in the Journal of Arachnology, was conducted by researchers from the University of Portsmouth, Lund University (Sweden), Aarhus University (Denmark) and Botswana International University of Science and Technology.