The first large-scale study of its kind has uncovered more than 4,000 years’ worth of distinctive foraging behaviour in a species once driven to the brink of extinction. 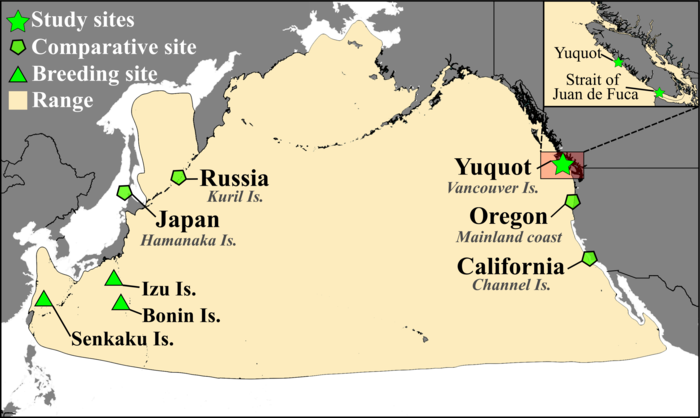 The first large-scale study of its kind has uncovered more than 4,000 years’ worth of distinctive foraging behaviour in a species once driven to the brink of extinction.

An international team of researchers, led by the University of Leicester, identified long-term patterns in the behaviour of the short-tailed albatross (Phoebastria albatrus) in the North Pacific Ocean by studying isotopes found in archaeological and museum-archived samples of the bird, dating as far back as 2300 BCE.

Their findings, published today (Thursday) in Communications Biology, show long-term patterns in foraging behaviour for the short-tailed albatross for the first time – and demonstrate how individual birds foraged the same hyper-localised sites for thousands of years in spite of the species’ huge potential foraging range across thousands of miles of Pacific coastline and open ocean.

But this behaviour, a demonstration of long-term individual foraging site fidelity (LT-IFSF), can pose significant risks for animals who specialise in areas which may be impacted by human activity.

The short-tailed albatross was brought to the brink of extinction by feather hunters between the 1880s and 1930s and though careful conservation has resulted in exponential population growth in recent decades, this trend of LT-IFSF has not been observed in the last century.

Dr Eric Guiry is Lecturer in Biomolecular Archaeology at the University of Leicester and corresponding author for the study, which focused on two locations close to Yuquot, Canada, and compared findings to sites in the USA, Russia and Japan. He said:

“Although evidence for the extent and depth of LT-IFSF across other species is still emerging, the extreme distances and time scale of the behaviour seen here indicates that this foraging strategy may be a fundamental, density-driven adaptation that could become widespread again as recovering animal populations reach pre-industrial levels.”

In contrast to most other tissues such as muscle or feather, which turn over on a scale of days, weeks, or months), isotopic compositions from bone collagen, which remodels slowly over the entire lifespan on an individual, reflect an average of foods consumed over the last several years of an individual’s life.

This provides a unique perspective for exploring lifetime trends in animal diet and migration behaviour.

By mapping these biological markers against known isotopic baselines across the species’ foraging range, linked to factors such as sea surface temperature and CO2 concentrations, the researchers were able to build up a picture of the short-tailed albatross’ migratory and foraging behaviour over hundreds of generations.

But, crucially, as this behaviour is no longer observed among these birds, their findings show this hyper-specialised foraging in specific locations disappeared after the birds were hunted to near extinction in the 1880s, when only a handful of birds remained. Dr Guiry continued:

“We think this behaviour could be driven by competition among birds, meaning that, as the population recovers, we could see it re-emerge. This kind information is important because it provides advanced warning that monitoring for this remarkable behaviour, which can make the birds more vulnerable to human impacts, may need close attention.

“One of the most exciting findings, however, is actually quite a positive note. Our data also indicate that Indigenous communities at Yuquot were harvesting these birds with little impact on their population for thousands of years.

“Not only does this tell us something about the long-term sustainability of Indigenous marine resource use at Yuquot, it provides a clear example of how people and the short-tailed albatross can co-exist.”