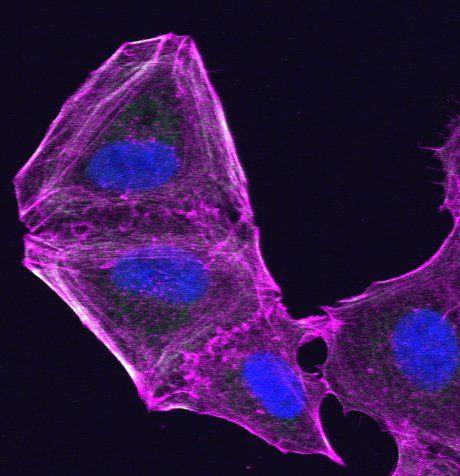 Researchers have found that melanoma cells fight anti-cancer drugs by changing their internal skeleton (cytoskeleton) – opening up a new therapeutic route for combatting skin and other cancers that develop resistance to treatment.

The team, led by Queen Mary University of London, found that melanoma cells stop responding to both immunotherapies and drugs targeted at the tumour’s faulty genes (B-RAF or N-Ras mutations in the MAPK pathway) by increasing the activity of two cytoskeletal proteins – ROCK and Myosin II. The team found that these molecules were key for cancer cell survival and resistance to these treatments.

The molecules had previously been linked to the process of metastatic spread but not to the poor impact of current anti-melanoma therapies. This work points to a strong connection between metastasis and therapy resistance – confirming that the cytoskeleton is important in determining how aggressive a cancer is.

The findings are published in the journal Cancer Cell today.

Malignant melanoma has very poor survival rates despite being at the forefront of personalised immunotherapy. This is largely due to the development of resistance. Around 16.000 people in the UK are diagnosed with malignant melanoma each year, with more than 2,300 deaths.

Tests in mice suggest that the therapy resistant (or non-responding) tumours are effectively addicted to ROCK-Myosin II to grow. The team discovered that blocking the ROCK-Myosin II pathway not only reduces cancer cell growth, but also attacks faulty immune cells (macrophages and regulatory T cells) that are failing to kill the tumour. This action boosts anti-tumour immunity.

Lead author Professor Victoria Sanz-Moreno, Professor of Cancer Cell Biology at Queen Mary, said: “We were very surprised to find that the cancerous cells used the same mechanism, changing their cytoskeleton, to escape two very different types of drugs. In a nutshell if you are a cancer cell, what does not kill you makes you stronger. However, their dependence on ROCK-Myosin II is a vulnerability that combination drug therapy tests on mice suggest we can exploit in the clinic by combining existing anti-melanoma therapies with ROCK-Myosin II inhibitors.”

She said the research may have implications for cancers with similar faulty genes.

Fiona Miller Smith, chief executive of Barts Charity, which part-funded the research, said: “We are pleased to support the research led by the extremely talented Professor Victoria Sanz-Moreno and her passionate team who were recruited to the Barts Cancer Institute, as part of Barts Charity’s recent £10m strategic investment into cancer research at Queen Mary. Overcoming resistance to cancer therapy is an important area of research, and we are extremely proud that our investment has contributed to these important new findings which could benefit melanoma patients.”

The research was also part-funded by Cancer Research UK and the Harry J Lloyd Charitable Trust and involved researchers from the Francis Crick Institute, King’s College London and the Institute of Cancer Research.

About Queen Mary University of London

At Queen Mary University of London, we believe that a diversity of ideas helps us achieve the previously unthinkable.

In 1785, Sir William Blizard established England’s first medical school, The London Hospital Medical College, to improve the health of east London’s inhabitants. Together with St Bartholomew’s Medical College, founded by John Abernethy in 1843 to help those living in the City of London, these two historic institutions are the bedrock of Barts and The London School of Medicine and Dentistry.

Today, Barts and The London continues to uphold this commitment to pioneering medical education and research. Being firmly embedded within our east London community, and with an approach that is driven by the specific health needs of our diverse population, is what makes Barts and The London truly distinctive.

Our local community offer to us a window to the world, ensuring that our ground-breaking research in cancer, cardiovascular and inflammatory diseases, and population health not only dramatically improves the outcomes for patients in London, but also has a far-reaching global impact.

This is just one of the many ways in which Queen Mary is continuing to push the boundaries of teaching, research and clinical practice, and helping us to achieve the previously unthinkable.