Research details impact of energy development on deer habitat use 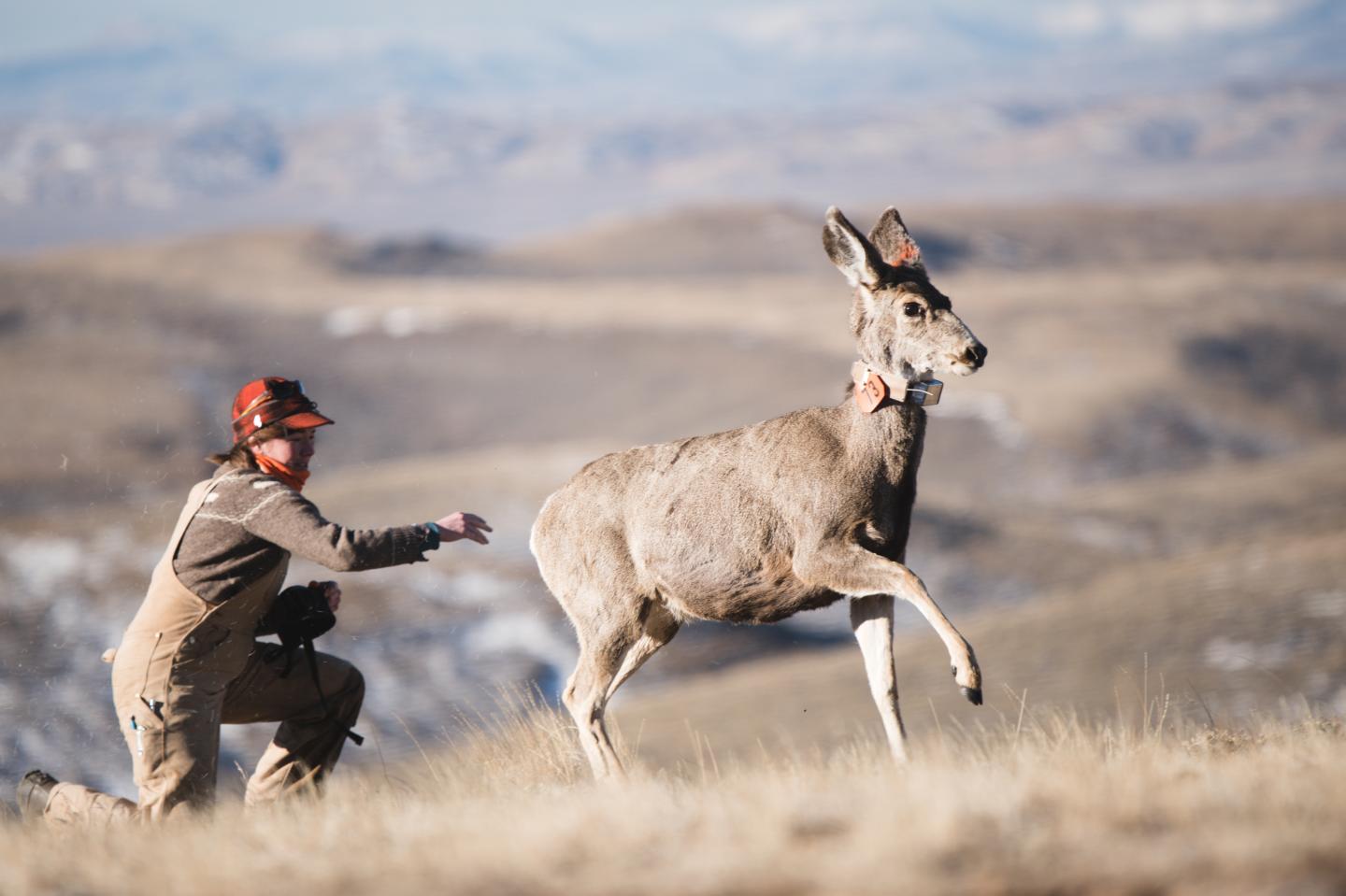 For every acre of mule deer habitat taken by roads, well pads and other oil and gas development infrastructure in Wyoming’s Green River Basin, an average of 4.6 other acres of available forage is lost, according to new research by University of Wyoming scientists.

That’s because deer avoid areas close to such human disturbance, even when there’s quality forage in those areas, says the research published in the journal Ecological Applications.

“Large herbivores have adapted to the naturally occurring constraints of their foodscape, but certain levels of human disturbance appear to prompt behaviors across multiple scales that, in turn, result in exaggerated losses of forage,” the scientists wrote. “Recognizing the cumulative losses of forage is key to providing wildlife managers and industry with realistic expectations of population effects that are likely to ensue on winter ranges where energy development occurs. Such knowledge can guide the evaluation of trade-offs between energy development and the performance and abundance of large herbivore populations.”

The new findings help explain why previous research showed a 36 percent decline in the mule deer population during 15 years of energy development on the Pinedale Anticline in western Wyoming’s Sublette County. While those previous studies correlated energy development with declining deer numbers, the new research specifically documented changes in the foraging behavior of deer in relation to oil and gas activity.

The research involved measuring production and use of the primary food for deer during winter — sagebrush — along with the capture, collaring and monitoring of a total of 146 deer between March 2013 and March 2015 in three sagebrush-covered areas of the Green River Basin. Those are the Pinedale Anticline and adjacent areas southwest of Pinedale; an area of the northern Wyoming Range foothills northwest of LaBarge; and an area of the southern Wyoming Range foothills west of Kemmerer. All provide winter range for components of the Wyoming Range deer herd, historically Wyoming’s largest mule deer population.

The scientists found that, above all, deer favor areas where new growth of new leader shoots of sagebrush is high, but that human disturbance from oil and gas activity negatively influenced their use of such forage.

“Across three winter ranges and different development scenarios, mule deer avoided areas close to disturbance, tended to move away from disturbance and increased vigilant behavior when near disturbance,” the researchers wrote. “Mule deer selected for areas with high foraging opportunities, but their use of available forage near energy development was never realized to the same potential as similar forage patches farther from development.”

As a result, the indirect loss of deer forage due to human disturbance far exceeded direct habitat loss from roads, well pads and other oil and gas infrastructure. In fact, across all three study areas, human disturbance resulted in a 10.5 percent decrease in use of available forage; direct habitat loss from construction accounted for just 2.3 percent.

The loss of habitat due to human disturbance did vary significantly from area to area, ranging from 19.5 percent on the Pinedale Anticline to 4.3 percent in the area northwest of LaBarge. The scientists believe that’s primarily because the area northwest of LaBarge is more rugged, with better sagebrush production and a lower intensity of human disturbance even though energy development is present.

“To meet global demands for energy resources, oil and gas resources will continue to be extracted from critical wildlife ranges, including winter ranges of migratory, large herbivores,” they wrote. “Accordingly, understanding how those disturbances associated with energy development can affect behavior, foraging and, ultimately, population dynamics will help identify ways to minimize the effects.”

The project was led by Samantha Dwinnell, research scientist with UW’s Haub School of Environment and Natural Resources, and Kevin Monteith, associate professor with the Haub School, Wyoming Cooperative Fish and Wildlife Research Unit, and the Department of Zoology and Physiology. Other collaborators included Professor Jeff Beck, of the Department of Ecosystem Science and Management; Hall Sawyer, of Western Ecosystems Technology Inc.; Jill Randall and Gary Fralick, of the Wyoming Game and Fish Department; and Jennifer Forbey, of Boise State University’s Department of Biological Sciences.

The fat of the land: Estimating the ecological costs of overeating

Brain networks come ‘online’ during adolescence to prepare teenagers for…

Identified a determinant protein for tumor progression and metastasis in Rhabdomyos

Scienmag Sep 19, 2019
Differences in the molecular structures explain the different colors of this bioluminescence in different species.…

Optical clocks started the calibration of the international atomic…