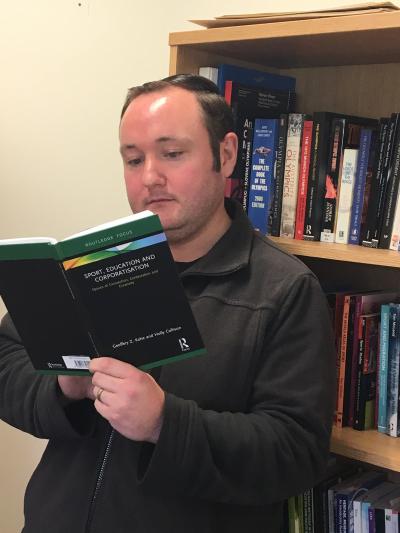 A new book co-written by a University of Kent sports scientist recommends corporations and organisations engage more effectively with communities – rather than taking a ‘top down’ approach – to improve relationships and outcomes in the sport sector.

Such outcomes include approaches to the financial resourcing of schools and community groups, shared development of sport-based educational material, and the general promotion of sport and physical activity.

His book, entitled Sport, Education and Corporatisation: Spaces of connectivity, contestation and creativity (Routledge, 2019), looks at global, regional and local places where stakeholder connections are made, sport and physical activity initiatives are produced, and community action and engagement takes place.

The book considers key organisations, including the International Olympic Committee, international and European football associations, the United Nations and its affiliated agencies, companies like Nike, Adidas, Coca Cola and McDonalds as well as philanthropic entities such as the Gates and Aegon Transamerica Foundation.

Dr Kohe and co-author Dr Holly Collison, of Loughborough University London, argue that large multinational companies are in a powerful position to shape sports education. However, not enough is known about corporate interventions in sport and sport policy development.

Alliances between commercial entities and sport for educational purposes have become increasingly normalised, and are used frequently to demonstrate a shared commitment to a ‘greater good’, the researchers argue.

Dr Kohe, a member of Kent’s Sport Legacies and Communities Research Group, said: ‘Ultimately, we need more space for critical dialogue and local ownership in these partnerships and improved transparency, accountability and democracy at all levels. Organisations that lead initiatives and control resource provision have moral responsibilities and a duty of care to ensure their presence is not exploitative and agendas do not supplant existing liberties and freedoms.’

For further information and interview or image requests contact Sandy Fleming at the University of Kent Press Office.

News releases can also be found at http://www.kent.ac.uk/news

Established in 1965, the University of Kent – the UK’s European university – now has almost 20,000 students across campuses or study centres at Canterbury, Medway, Tonbridge, Brussels, Paris, Athens and Rome.

It was ranked 22nd in the Guardian University Guide 2018 and in June 2017 was awarded a gold rating, the highest, in the UK Government’s Teaching Excellence Framework (TEF).

In 2018 it was also ranked in the top 500 of Shanghai Ranking’s Academic Ranking of World Universities and 47th in the Times Higher Education’s (THE) new European Teaching Rankings.

Kent is ranked 17th in the UK for research intensity (REF 2014). It has world-leading research in all subjects and 97% of its research is deemed by the REF to be of international quality.

Along with the universities of East Anglia and Essex, Kent is a member of the Eastern Arc Research Consortium (http://www.kent.ac.uk/about/partnerships/eastern-arc.html).

The University is worth £0.7 billion to the economy of the south east and supports more than 7,800 jobs in the region. Student off-campus spend contributes £293.3m and 2,532 full-time-equivalent jobs to those totals.

Extracting something from nothing: A bright glow from empty space

Scienmag Sep 24, 2019
Researchers have outlined how fishing and farming policies could be created to protect employment opportunities and…

Toad disguises itself as deadly viper to avoid attack —…