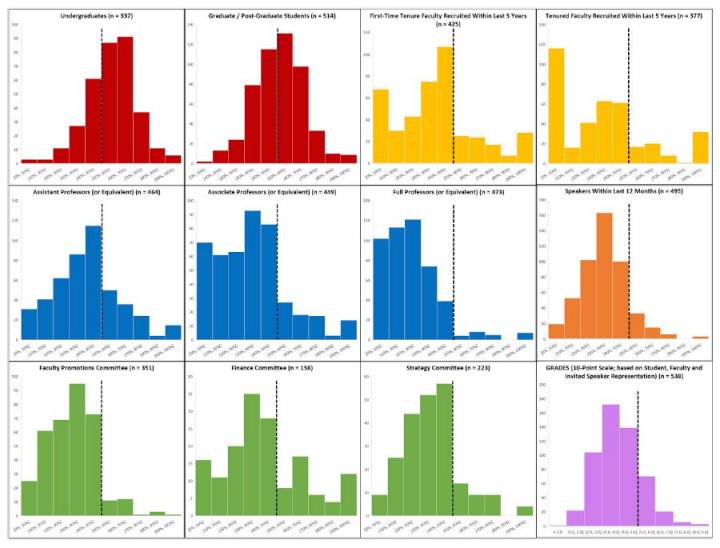 Although women have made important contributions to science throughout history, they have consistently been underrepresented at all levels. Now, data from a four-year study of institutional “report cards” undertaken as part of the New York Stem Cell Foundation’s (NYSCF) Initiative on Women in Science and Engineering (IWISE) suggest that although a growing number of women are training in the sciences, efforts to promote and maintain women in more senior scientific roles are still largely inadequate. Additionally, the researchers report that not enough policies have been put in place to support women in science throughout their careers. The study is being reported September 5 in the journal Cell Stem Cell.

“The data suggest that we are making headway,” says Reshma Jagsi (@reshmajagsi), a radiation oncologist and director of the Center for Bioethics and Social Sciences in Medicine at the University of Michigan and one of the corresponding authors. “That said, there are still many institutions that have few women in senior-most faculty positions. There also remains quite a bit of room for improvement in certain areas, including the representation of women in certain roles, such as speaking at scientific meetings.”

The researchers obtained their data through the use of institutional report cards that were collected when individual researchers applied for grants from NYSCF. The report cards were part of a 2014 NYSCF project that put forward a number of strategies aimed at helping to achieve gender parity in science, technology, engineering, and math (STEM). Of the 1,287 report cards that were submitted, 741 provided complete information for a given year, and some included multiple years. Overall, the data in the paper represent 541 institutions in 38 countries in North America (72%) and Europe (18%).

The investigators found that although women made up more than half of the population among undergraduate, graduate, and post-graduate students, the picture became different as seniority increased. Women made up 42% of assistant professors, 34% of associate professors, and 23% of full professors. These rates varied greatly by institution: At about one-third of the institutions surveyed, women made up less than 10% of tenured faculty recruits.

“We expected to find that women would be better represented at more junior ranks compared with senior ranks,” Jagsi says. “But I found it noteworthy that there were regional differences. For example, institutions in Europe come closer to achieving gender parity.”

The researchers say their findings suggest that the primary issue is not recruiting women into STEM roles but retaining them and promoting them into more influential positions.

They also point out the important part that funding organizations can play. “Funding organizations are in a unique position to require institutional leaders to pay attention to equity, diversity, and inclusion within their organizations,” Jagsi says. “By requiring these report cards, they can promote actions that help all scientists thrive. We hope that other funding bodies, like the NIH, will adopt a similar report card.”

The next phase of IWISE will focus on highlighting best practices undertaken by institutions. This will provide comparative data and allow the researchers to monitor progress over time. The researchers will also look at other factors that may influence the recruitment and retention of women scientists, such as the presence of women in top leadership roles, the rates at which tenured women stay in their positions, and equity in salaries across gender, race, and ethnicity.

“For my own work, I plan to begin to focus more on issues of intersectionality,” Jagsi concludes. “A particularly understudied area involves the career experiences in women with other minority identities, such as race. Further research is needed to understand the challenges these women face.”

This study was supported by the Doris Duke Charitable Foundation and the New York Stem Cell Foundation Research Institute.

How active shooter incidents off campus lead to guns on campus

Praise, rather than punish, to see up to 30% greater focus in the classroom