Tokyo, Japan – Mangrove forests store huge amounts of carbon but figuring out how much is stored globally is challenging. Now, researchers from Japan have developed a new model that uses remote sensing of environmental conditions to determine the productivity of mangrove forests. 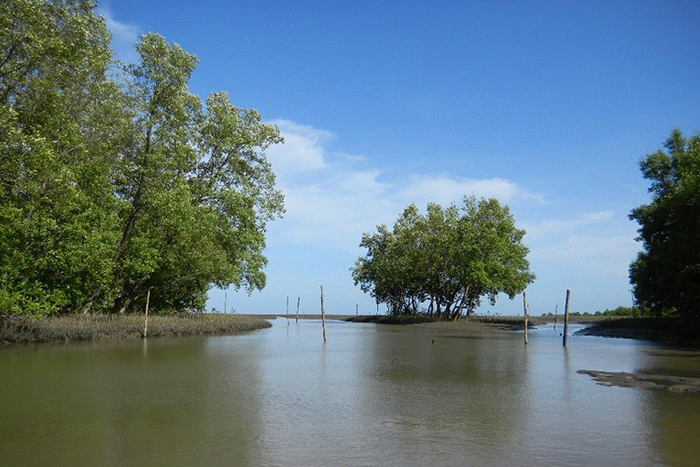 Credit: Institute of Industrial Science, The University of Tokyo

Tokyo, Japan – Mangrove forests store huge amounts of carbon but figuring out how much is stored globally is challenging. Now, researchers from Japan have developed a new model that uses remote sensing of environmental conditions to determine the productivity of mangrove forests.

In a recent study in Scientific Reports, researchers from the Institute of Industrial Science, The University of Tokyo, developed a model to assess the productivity of coastal mangroves in China. Mangroves grow along tropical coastlines and are regularly inundated by seawater. These unique species are well adapted to tropical coastal habitats and have special features such as aerial roots and salt-tolerant tissues that enable them to thrive under dynamic conditions. As a result, the productivity of mangrove forests is influenced by a range of environmental factors, such as sea surface temperature, salinity, and photosynthetic active radiation.

In the past, light use efficiency models have been used to assess the productivity of terrestrial forests but there are no such models for more complex mangrove ecosystems.

“Previous attempts to model mangrove productivity have used field measurements and produced estimates at a local scale,” says lead author of the study, Yuhan Zheng. “But to truly understand the capacity for mangroves to store carbon, global assessments are needed, and these require measurements of environmental conditions on a much larger scale.”

To do this, the team used satellite data to develop a productivity model that is more appropriate for mangroves. Remote sensing can be used to collect information about the environment over large areas, and over time. The researchers developed a model that considered the effects of tidal inundation and then combined the model with satellite data on photosynthetically active radiation to estimate the productivity of mangrove forests along the coastline of China.

“We checked the results from the model against measurements of productivity from carbon flux towers, which measure changes in carbon between the mangrove canopy and the atmosphere, says Yuhan Zheng. “We found that our model could accurately estimate mangrove productivity.”

The model also performed better than a terrestrial model that was tested.

As the world seeks ways to mitigate the effects of climate change, there is a growing appreciation of the value of intact mangrove forests. This new model represents an important step towards understanding the capacity of mangroves to store carbon.

About Institute of Industrial Science, The University of Tokyo

The Institute of Industrial Science, The University of Tokyo (UTokyo-IIS) is one of the largest university-attached research institutes in Japan. Over 120 research laboratories, each headed by a faculty member, comprise UTokyo-IIS, which has more than 1,200 members (approximately 400 staff and 800 students) actively engaged in education and research. Its activities cover almost all areas of engineering. Since its foundation in 1949, UTokyo-IIS has worked to bridge the huge gaps that exist between academic disciplines and real-world applications.