Remarkable new insights into the pathology of Usher syndrome 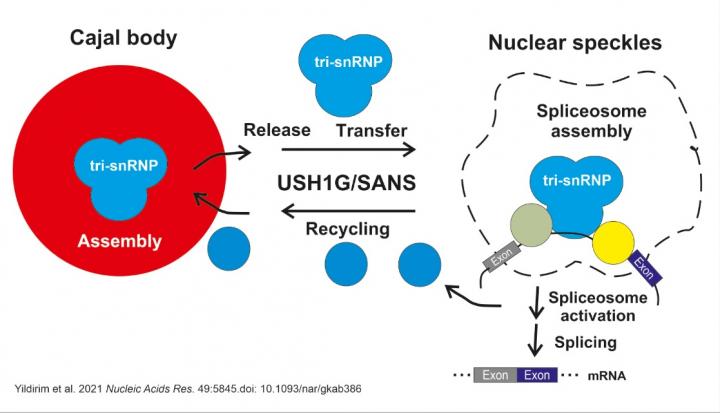 Human Usher syndrome (USH) is the most common form of hereditary deaf-blindness. Sufferers can be deaf from birth, suffer from balance disorders, and eventually lose their eyesight as the disease progresses. For some 25 years now, the research group led by Professor Uwe Wolfrum of the Institute of Molecular Physiology at Johannes Gutenberg University Mainz (JGU) has been conducting research into Usher syndrome. Working in cooperation with the group headed up by Professor Reinhard Lührmann at the Max Planck Institute for Biophysical Chemistry in Göttingen, his team has now identified a novel pathomechanism leading to Usher syndrome. They have discovered that the Usher syndrome type 1G protein SANS plays a crucial role in regulating splicing process. Furthermore, the researchers have been able to demonstrate that defects in the SANS protein can lead to errors in the splicing of genes related to the Usher syndrome, which may provoke the disease.

“We are aiming to elucidate the molecular basis that leads to the degeneration of the light-sensitive photoreceptor cells in the eye in cases of Usher syndrome,” said Professor Uwe Wolfrum. For sufferers with USH, cochlea implants can be used to compensate for hearing loss. However, there are currently no existing treatments for the associated blindness. The current investigation is focusing on one of the Usher syndrome proteins, the USH1G protein, known as SANS. Previous research undertaken by Wolfrum’s team established that SANS acts as a scaffold protein. SANS has multiple domains to which other proteins can dock, thus ensuring correct cellular function. Mutations in the USH1G/SANS gene lead to malfunctions of the auditory and vestibular hair cells in the inner ear and of the photoreceptor cells of the retina, which are responsible for the sensory defects experienced by Usher syndrome patients.

It remains unclear how SANS contributes to pathogenic processes in the eye. Encoded by the USH1G gene, the protein is expressed in the photoreceptors of the retina and glia cells. “So far, we had thought of SANS simply as a scaffold molecule that participates in transport processes in the cytoplasm associated with ciliary extensions,” said Wolfrum. “But recently, Adem Yildirim in his PhD thesis conducted in the International PhD Program (IPP) in Mainz discovered that SANS interacts with splicing factors to regulate pre-mRNA splicing.”

SANS regulates the splicing of pre-mRNA

Splicing is an important process in path from the coding gene to the biosynthesis of proteins. What happens during splicing is that non-coding introns are removed from initially transcribed pre-mRNA or, in the case of alternative splicing, exons that are not required for the subsequent protein variant are excluded. The resulting mRNA is then used for protein biosynthesis. The splicing process is catalyzed in the nucleus by the spliceosome, a dynamic, highly complex molecular machine that is successively assembled during the splicing process from a number of subcomplexes of protein and RNA components.

“We were surprised by our finding that SANS is not only a component of the transport to cilia at the surface of the cell but also active in the nucleus and can modulate the splicing process there too”, said Wolfrum, referring to their results published in Nucleic Acids Research. In the cell nucleus, SANS is responsible for transferring tri-snRNP complexes, or components of spliceosome subcomplexes, from the Cajal bodies, a kind of molecular assembly line, to the so-called nuclear speckles. In this compartment, tri-snRNP complexes bind to the spliceosome assembly to subsequently activate it. SANS is also likely to be involved in recycling the tri-snRNP components back to the Cajal bodies.

The absence of SANS and also pathogenic mutations of the USH1G/SANS gene prevent the spliceosome being correctly assembled and sequentially activated. This, in turn, suppresses the correct splicing of other Usher syndrome-related genes, ultimately leading to their dysfunction and therefore to the development of the disorder. “Thus, we provide the first evidence that splicing dysregulation may participate in the pathophysiology of Usher syndrome,” is how the authors sum up their results in their article. And Professor Uwe Wolfrum added: “In addition to the new findings relating to the splicing mechanism, we have also identified new aspects that we aim to investigate with regard to developing concepts for the treatment and therapy of the Usher syndrome in future.”