Reliably measuring whether rivers or lakes run out of air

International study shows that freshwater polluted by fecal material can be determined more quickly and reliably using a new technique. 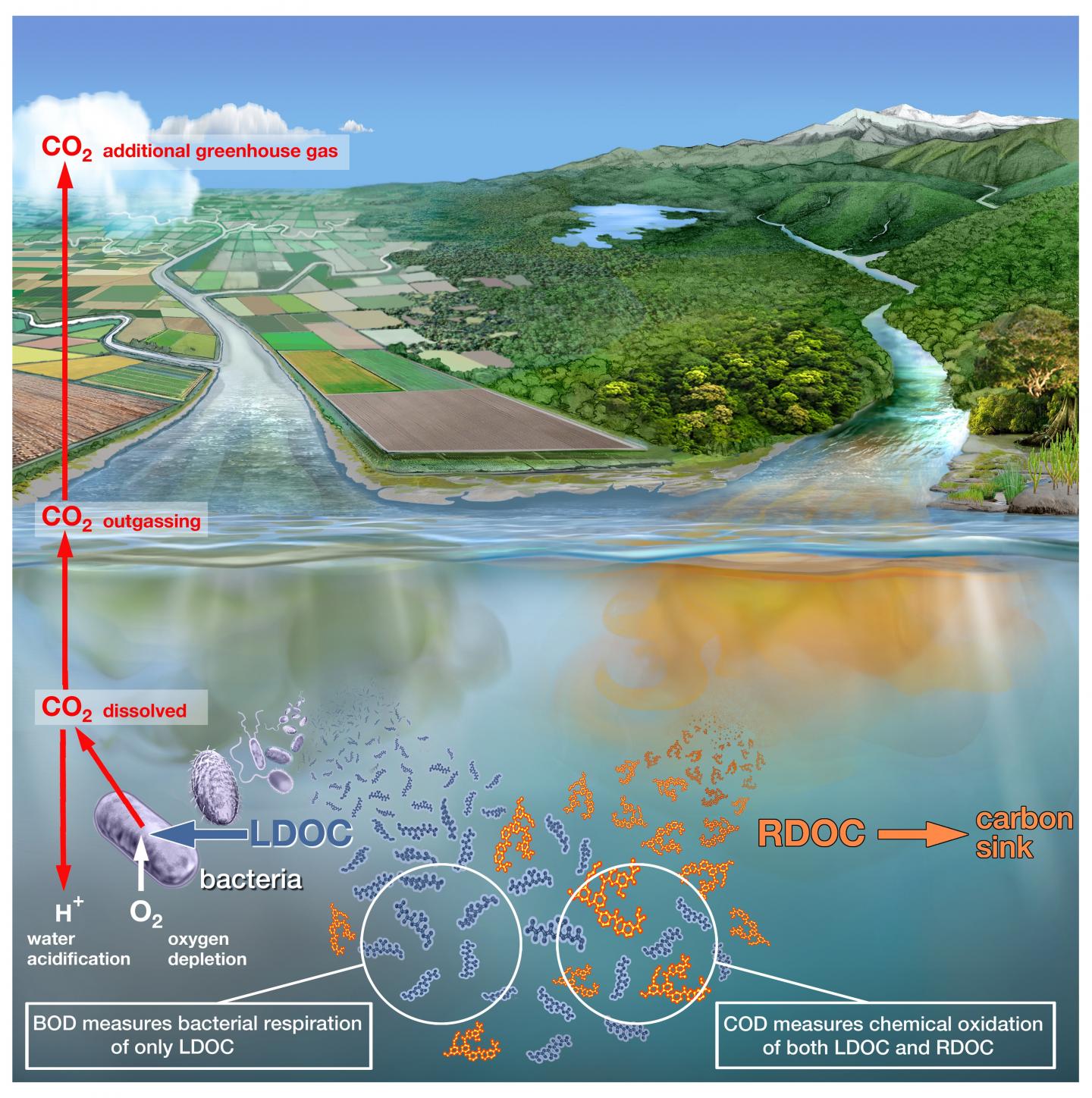 When wastewater from villages and cities flows into rivers and lakes, large quantities of fats, proteins, sugars and other carbon-containing, organic substances wind up in nature together with the fecal matter. These organic substances are broken down by bacteria that consume oxygen. The larger the volume of wastewater, the better the bacteria thrive. This, however, means the oxygen content of the water continues to decrease until finally the fish, muscles or worms literally run out of air. This has created low-oxygen death zones in many rivers and lakes around the world.

No gold standard for measurements until now

In order to measure how heavily the waters are polluted with organic matter from feces, government bodies and environmental researchers regularly take water samples. One widely used measurement method uses a chemical reaction to determine the content of organic substances. As an international team of scientists now shows, this established method provides values from which the actual degree of the water pollution can hardly be derived. Prof. Helmuth Thomas, Director of Hereon’s Institute of Carbon Cycles is also a contributor to the study, which has now been published in the scientific journal Science Advances. “In the paper, we are therefore also introducing a new method for making the measurements much more reliable in the future,” he says.

Using the conventional measurement method, water samples are mixed with the chemicals permanganate or dichromate. These are especially reactive and break down all organic substances in a short time. The quantity of consumed permanganates or dichromates can then be used to determine how much organic substance was contained in the water sample. Experts refer to this measurement as “chemical oxygen demand”, COD. The problem with the COD measurements is that they do not differentiate between the organic substances that wind up in the water with the sewage, and those that arise naturally–such as lignin and humic acids–which are released when wood decays. This means that the water pollution can hardly be distinguished from the natural content of organic substances. “For the Han River in South Korea, for example, we have shown that the pollution with organic substances from wastewater in the past twenty-five years has decreased. The COD measurements, however, still show high values as they were before,” says Helmuth Thomas, “because here the natural substances make up a large portion of the organic matter in the water.”

But how can the actual pollution be measured more reliably? A biological measurement method has been established here for decades, but it is much more complex than the COD method and is therefore used more seldomly by government bodies and research institutions. In this case, a water sample is taken from the river or lake and the oxygen content of the water is measured as an initial value. Another “parallel sample” is immediately sealed airtight. Then this water sample rests for five days. During this time, the bacteria break down the organic substance, whereby they gradually consume the oxygen in the water. After five days, the container is opened and the oxygen is measured. If the water contains a great deal of organic matter, then the bacteria were particularly active. The oxygen consumption was then correspondingly high. Experts refer to the “biological oxygen demand” (BOD) in this measurement. “The BOD measurement is far more precise than the COD because the bacteria preferentially break down the small organic molecules from the wastewater but leave the natural ones, such as lignin, untouched,” says Thomas. Nevertheless, the BOD measurement has its disadvantages, too. On the one hand, the BOD measurement takes five days, while the COD value is available after a few minutes. On the other, while filling, storing and measuring the water samples, meticulous care must be taken to ensure that no oxygen from the ambient air winds up in the sample and falsifies the measurement value. “Only a few people with a great deal of laboratory experience have mastered how to entirely handle the BOD measurement,” says Thomas. “Therefore, government bodies and researchers even today still prefer the COD despite its greater uncertainties.”

Helmuth Thomas and his team are therefore introducing an alternative method that improves on the conventional BOD measurement. The advantage to the method is that only one water sample is necessary, which is immediately sealed and the oxygen consumption is measured without interfering with the sample. It is therefore unnecessary to open the sample after five days again to measure the oxygen content. This prevents the sample from coming into contact with atmospheric oxygen again. With the new approach, an optical fiber is inserted into the sample vessel as soon as the water sample is filled. Through this fiber, the oxygen content can be continuously measured directly in the sample using optical effects. Thomas says, “We can measure the oxygen content non-stop and obtain a far more precise picture of the oxygen consumption by the bacteria.” First tests have shown that a meaningful result is already available after about forty-eight hours, something that considerably accelerates the BOD measurement. All in all, the optical method makes the BOD measurements not only more reliable, but also faster. Helmuth Thomas assumes that the new method in the coming years therefore will be established as the new standard, which will replace both the COD as well as the classic BOD measurements. In the future, for example, it will be possible to determine more reliably than before whether water pollution control measures are actually successful.