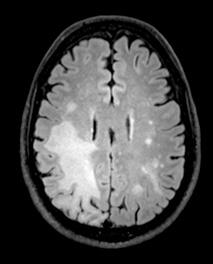 The anti-cancer drug pembrolizumab has shown promise in slowing or stopping the progression of progressive multifocal leukoencephalopathy (PML), a typically fatal infection of the brain caused by the JC virus (JCV). This finding comes from a small-scale study by scientists at National Institute of Neurological Disorders and Stroke (NINDS), part of the National Institutes of Health. The study appears in the New England Journal of Medicine.

Pembrolizumab blocks the interaction between two proteins, PD-1 and PD-L1. Normally, these proteins work by putting the brakes on the immune system to limit excessive inflammation. However, some tumors that have PD-L1 on their surface can exploit this “off switch,” limiting the immune system’s ability to attack the cancer. Recent studies of PML patients have suggested that this mechanism may also be involved in JCV brain infections.

“We found both PD-1 and PD-L1 proteins in the infected parts of brains of patients with PML,” said Irene Cortese, M.D., director of the NINDS Neuroimmunology Clinic and first author of the paper. “This led us to ask whether pembrolizumab could be a potential treatment for PML.”
Eight patients at the NIH Clinical Center, all of whom had signs of worsening PML, were treated with pembrolizumab. The status of their infection was monitored by MRI scans of their brains and by checking the levels of JCV in their cerebral spinal fluid (CSF). In five of the eight patients, the amount of circulating virus was reduced following treatment with pembrolizumab. Importantly, these patients’ symptoms improved or stabilized, and their brain MRIs showed shrinking of infection-related brain lesions.

“Previous attempts to treat PML have been disappointing,” said Dr. Cortese, “so we are very encouraged by these preliminary results.”

JCV is a common and usually innocuous virus that normally resides in the kidneys of anywhere from one- to two-thirds of the population. Rarely, in patients who have had their immune system suppressed due to conditions such as HIV/AIDS or because of immunosuppressive medications such as many cancer therapies or some treatments for autoimmune diseases, JCV can change to a form that infects cells in the brain. These infections are what causes PML, which can lead to a variety of symptoms including clumsiness, progressive weakness, and changes in vision, speech, and sometimes personality.

“This study importantly shows for the very first time that, in this unique patient population with a high mortality rate, patients can achieve remission of an otherwise fatal infection,” said Avindra Nath, M.D., NINDS Clinical Director and senior author of the study. “It will open areas of investigation and could help revolutionize treatment for similar chronic infections in the setting of immune compromise.”

Currently, researchers are working on discovering markers for individuals at high risk for PML and for earlier detection of infection. Larger clinical trials conducted under more controlled conditions are necessary for a better understanding of the effect of pembrolizumab or similar medicines on PML, and work is currently underway to determine the best way to take those next steps.

This study was supported by the Intramural Research Program of NINDS/NIH.

Scienmag Sep 20, 2019
The St. Olaf College team's findings on song recognition in the fly Ormia ochracea are part of special on 'How…

Less chemotherapy may have more benefit in rectal cancer