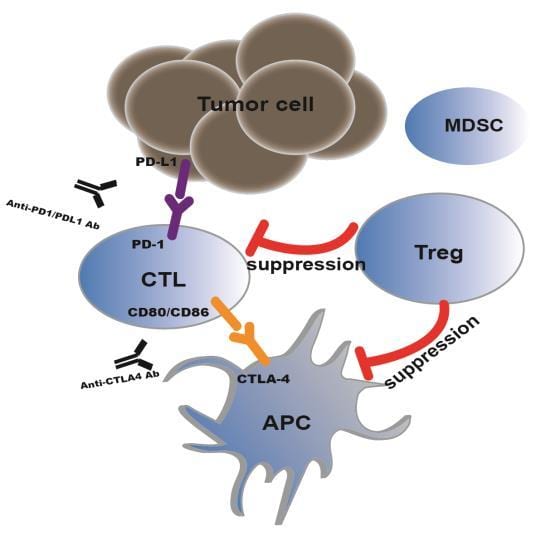 According to estimates from the World Health Organization (WHO), there will be 18.1 million new cases and 9.6 million cancer deaths worldwide in 2018. Cancer has become a serious disease that affects people all over the world. And studies on the treatment of tumors have far-reaching significance.

In recent years, tumor immunotherapy has become the fourth largest cancer treatment measure in line with traditional surgical treatment, radiotherapy and chemotherapy, and targeted therapy. And the 2018 Nobel Prize in Physiology or Medicine was awarded to this field because of the amazing effects of cancer immunotherapies.

“The Nobel Assembly at Karolinska Institutet has today decided to award the 2018 Nobel Prize in Physiology or Medicine jointly to James P. Allison and Tasuku Honjo for their discovery of cancer therapy by inhibition of negative immune regulation,” announced by the Secretary-General of the Nobel Committee Thomas Perlmann.

James Allison studied a known protein called CTLA-4 which functions as a brake when antigen presenting cells(APCs) help to stimulate T cells via providing antigens. And CTLA-4 antibody for the treatment of melanoma were approved by the FDA in 2011. Meanwhile, Tasuku Honjo discovered PD-1, a protein also operates as a brake, but with a different mechanism to mediate immune escape of tumor cells. Therapies based on this discovery have been proved to be strikingly effective, especially for solid tumors. Five antibody drugs targeting PD-1/PD-L1 have marketed and have been used for more than a dozen indications in the past four years.

However, the objective response rate of patients is only 20%- 30%, on average, indicating that additional factors contributing to the resistance to PD-1/PD- L1 monoclonal antibodies therapies need to be identified. Multiple evidence indicates that regulatory T cells (Tregs) might play a key role in regulating immune response to tumors.

Tregs, formerly known as suppressor T cells, play an important role in maintaining self-tolerance and immune homeostasis, but an inhibitory role in evoking effective antitumour immune responses. Studies in both humans and animal models indicate that Tregs accumulate in the tumor sites of various cancers. Notably, the increased numbers of Tregs are positively correlated with poor prognosis but negatively correlated with patient survival in the majority of tumours. There is ample evidence indicating that the depletion of Tregs or the inhibition of Treg function will enhance antitumour effects. Based on these findings, targeting tumour-associated Tregs might be an attractive strategy for alleviating tumour immunesuppression and improving immune responses against cancers. However, suitable candidates for target-Tregs immunotherapies with minimal toxic side effects remain unclear so far.

In a new systematic review in Sci China Life Sci, researchers summarize the characteristics of tumour-associated Tregs, the molecular basis of the regulation of Tregs, and the potential promising drug targets that have been discovered. Moreover, they discuss the scientific issues about the regulation of tumor-associated Tregs that require further research and the possible directions for exploring potential therapeutic targets.

Regarding the regulation of tumour-associated Tregs, both Treg-intrinsic and extrinsic factors contribute to the modulation. Endogenous factors are mainly derived from key signaling pathways in Treg cells, and exogenous factors are derived from other types of cells at the tumor site as well as the particularly complex tumor microenvironment. According to the researchers, the interaction between Tregs and other cell types in the TME and the effects of the abnormal TME metabolism on Tregs require deeper study.

“In addition to paying attention to highly expressed markers of tumour-associated Tregs, focusing on the instability of Tregs may also be a good choice for developing Treg-targeted immunotherapies,” addressed by the researchers, when talking about how to explore suitable targets.

It's the same, only different

Study reveals a new approach to enhancing response to immunotherapy in…

Neurosciences unlock the secret of the first abstract engravings